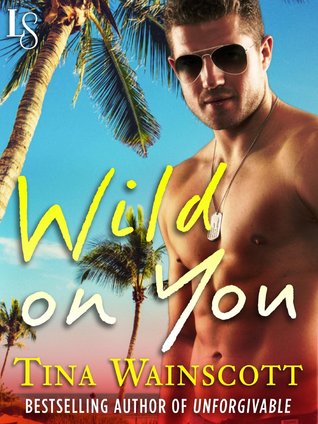 When Rick Yarbrough, aka Risk, a discharged SEAL with a taste for danger, joins the Justiss Alliance, his first assignment seems like a baby-sitting gig: He must guard an out-of-control general’s daughter. Then he meets his charge.
Addie Wunder is no baby. She’s a dedicated animal-rights activist who isn’t above breaking the law if innocent creatures are threatened. But her work has made her a lot of powerful enemies. If she doesn’t stop, she may just turn herself into an endangered species.  Risk’s mission is to keep Addie out of trouble. But as they grow closer, Addie becomes so much more than a job. And the more he has to lose, the more Risk is willing to put his own life on the line—for her cause, her safety, and her sweet-hot embrace.

HUBBY'S REVIEW:
This is a book out of The Justiss Alliance Series, by Tina Wainscott. The name comes from the man who owns what is a security company and he hires former men that were Navy Seals with him. Leads to how they work together and they know one another. This book deals with Risk being assigned as a body ground for a daughter of a retired General, who is a defender of animal rights but gets caught up with the animals and sometimes steals them from the owners who are being abusive. Now she has not only been receiving death threats but someone tired ran her off the road and she is the only person who is thinking that it is an accident. Risk is attracted to her from the beginning and though she has feelings she has been lying to herself and to her father and best friend she really does not knows what she is really feeling. She plans an escape from her body and though does manage that she lands right into the hands of the people who are after her. Risk manages to track her down and barley gets the both of them out but realizes that he was blinded by beauty. He must own up to the fact with boss and to himself that she is more than an hand full but to get her to understand that someone is really out to harm her. From there this book continues with the two of them getting into and out of trouble and both of them getting to know each other. This is a good story and the characters are not blown up to where you cannot believe them. I think that is what helps this story along. It moves fast and I like the banter between all of the characters but especially when the guys get together. This author who by the way acknowledges losing her nephew a Marine. She does well for the men who come home and honor their brothers and sisters, with a good story. A good book. I got this book from net galley.
at October 27, 2014
Email ThisBlogThis!Share to TwitterShare to FacebookShare to Pinterest

Babysitting for the Billionaire