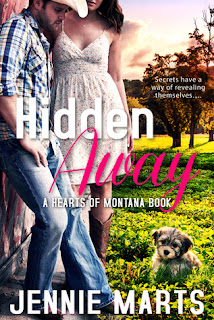 Secrets have a way of revealing themselves….

Right after a fire breaks out in her diner, a phone call changes Cherry Hill’s life. The tragic death of her cousin leaves Cherry sole guardian of her eight-year-old nephew. But the upper crust side of the Hill family deems her unfit and is determined to take Sam away from her. The only one on her side is the sexy sheriff, Taylor Johnson, the man who broke her heart nine years ago when he left town.

Taylor Johnson has sworn to protect the citizens of Broken Falls, but should that extend to a fake engagement to the woman who captured his heart so long ago? It doesn’t take long for his pretend feelings to turn real for both Cherry and her adorable nephew, Sam.

Rad-Reader:  How did you come up with this storyline?  Or did it find you?

Jennie:  I love second chance stories! I know that people are human and make mistakes, and I love this story because it gives two people who both made mistakes a chance to find happiness and true love again. I also adore stories set in small towns. I am from a small town in Kansas and also lived in a small town in Montana (both towns only have about 1200 people in them) and small towns are rich with charm and quirky characters.

Rad-Reader:  Cherry Hill was such a sweet and outgoing person.  How did her own family dislike her so much?  Especially, when she had nothing and they had everything?

Jennie:  She had nothing material wise- but she had the love and support of her grandparents- which gave her everything. Her cousin Reed is a bully who didn't even want the restaurant, he just didn't like that Cherry was given something that he wasn't. He'd been a bully to her since they were kids. And it was the same with his nephew, Sam. He saw himself as the better provider and didn't want Cherry to have something that he couldn't have. Aunt Bea is a great example of bullying. She was crotchety, mean, and never happy so she was intent on making sure no one else was happy either.

Rad-Reader:  Stacy accepted a gift of a child to raise as her own and upon her death with her husband it was their wishes that Cherry be the one to raise him.  Why would her brother and family go against Stacey’s wishes?

Jennie:  Because they are arrogant and vain, and think that Stacy was foolish and that they know what's better for Sam.

Rad-Reader:  What made Taylor come back to be a sheriff in his home town?

Jennie:  His dad was getting older and he'd been wanting to come back home to help his dad on the family ranch. He was offered the job as Sheriff when the old sheriff retired, and he felt like it was time to come home. (He may have also been hoping for a second chance with the fiery red-head that haunted his dreams and that he'd never been able to forget).

Rad-Reader:  Did Russ keep such a close relationship with Cherry because she had no family and he didn’t have Taylor anymore?  Or because he had wished his son had stayed and married her?

Jennie:  I think that's just part of being in a small town. You know everyone and you see each other all the time. He cared about her as a girl when she'd dated his son, and he ran into her all the time at the diner and around town.

Rad-Reader:  Once Cherry and Taylor take custody of Sam he becomes very attached to Taylor.  Was he just feeling safe or was it that he knew Cherry felt something for him?

Jennie:   Sam had grown up around Cherry- she was like a second mom to him anyway. Stacy had made sure that they were close, so he always felt very comfortable and loved by Cherry. I think he and Taylor felt an instant connection, and Sam felt comfortable with him at first because he was a friend of Cherry's--then he grew to really love him. And I think they just connected and bonded on a emotional level.

Rad-Reader:  The town was totally behind Cherry and her good heart coming out to help after the fire.  What made her family think she wasn’t good enough when clearly a whole town thought she was?

Jennie:  I think pure jealousy of the relationship that she had with her grandparents. And mix in some guilt that she stayed in Broken Falls and took care of her grandparents when they didn't.

Rad-Reader:  What song out today do you think best describes Hidden Away?

Rad-Reader:  If your book was made into a movie who would you want to play…
Cherry:  Amy Adams
http://static02.mediaite.com/themarysue/uploads/2012/09/AmyAdams.jpeg

Rad-Reader:  What started you on your path to writing?

Jennie:  I have always  wanted to be a writer. I think it's just in your blood. I knew I always wanted to write a book, but it took my kids going off to college to give me the boost I needed to finally follow my passion and pursue my dreams.

Rad-Reader:  What is your favorite genre?

Jennie:  I love romance, women's fiction, and suspense. That's why you'll usually find love, friendships, and sometimes a little suspense, in most of my books.

Jennie:  I  am currently working on a new series called the Bannister Brothers about a family of brothers. So far, the first two brothers, Bane and Owen, play hockey, the third is a rock star, and the fourth is the cute, smart nerdy little brother who is an accountant and takes care of all of their money. Worth the Shot (Bane's story) is available right now in the Mischief Under the Mistletoe box set and Icing On the Date (Owen's story) is available for preorder from Amazon. You can find all of my books on my Amazon author page at:http://www.amazon.com/Jennie-Marts/e/B00AQYGFPY/ref=dp_byline_cont_ebooks_1

Jennie:  You can find all of my books on my Amazon author page at:http://www.amazon.com/Jennie-Marts/e/B00AQYGFPY/ref=dp_byline_cont_ebooks_1

Rad-Reader:   Where can our readers find you online? (Website?)

Jennie:  Please visit my website atwww.jenniemarts.com and sign up for my newsletter to get all the latest news on promotions and new releases! And each newsletter has a little tidbit from my dog, Cooper!

We cannot thank Jennie enough for taking the time to be with us and answering all my Fangirl questions.  Her book so too me on an emotional rollercoaster that I was not expecting to take at all.  There were so many twist and turns some you could predict but some came right out of the blue.  I totally enjoyed the ride.  Thanks again Jennie :)  By the way you have now been snared by the line of our pole and are now part of this crazy family here at 1Rad-Reader Reviews.  You just didn't swim fast enough.  Sorry!
Char

at November 20, 2015
Email ThisBlogThis!Share to TwitterShare to FacebookShare to Pinterest