TOUGH AS THEY COME 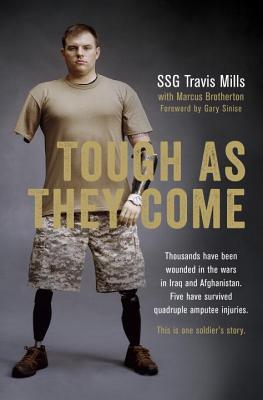 Thousands have been wounded in the wars in Iraq and Afghanistan. Five have survived quadruple amputee injuries. This is one soldier's story.

Thousands of soldiers die year to defend their country. United States Army Staff Sergeant Travis Mills was sure that he would become another statistic when, during his third tour of duty in Afghanistan, he was caught in an IED blast four days before his twenty-fifth birthday. Against the odds, he lived, but at a severe cost—Travis became one of only five soldiers from the wars in Afghanistan and Iraq to survive a quadruple amputation.

Suddenly forced to reconcile with the fact that he no longer had arms or legs, Travis was faced with a future drastically different from the one he had imagined for himself. He would never again be able to lead his squad, stroke his fingers against his wife’s cheek, or pick up his infant daughter.

Travis struggled through the painful and anxious days of rehabilitation so that he could regain the strength to live his life to the fullest.  With enormous willpower and endurance, the unconditional love of his family, and a generous amount of faith, Travis shocked everyone with his remarkable recovery. Even without limbs, he still swims, dances with his wife, rides mountain bikes, and drives his daughter to school.

Travis inspires thousands every day with his remarkable journey. He doesn’t want to be thought of as wounded.  “I'm just a man with scars,” he says, “living life to the fullest and best I know how.”

HUBBY'S REVIEW:
This is a story about Travis Miller who was part of the 82nd Airborne Division. He is also one of five survivors of quadruple amputations during Iraq and Afghanistan. The beginning of the book talks about his life growing up and then how he decided to join the service and then how he picked the Airborne. The 82ND was the unit my father was with during WWII and I have always held them a little special because of that, but Travis was really a true leader. He was always singing airborne songs and running back to camp after a mission was completed, a true spirit of Airborne when you know about their history. The story also goes into his marriage and birth of his daughter and then leads up to the third deployment that is the one where he is injured. From that point on you get to see first-hand more of the fear and pain of losing all of his limbs. At the same time you see how he builds his courage to fight past though obstacles, fears, and the pain with the help of his wife, family, friends and the rest of the military community. For his grit really showed to the point where even a group of Marines were encouraged by his determination to overcome and not to let his injuries overcome him. A very, very outstanding book, but more importantly a book about a true hero and a wife to stand by him. I got this book from netgalley.  I give this 5 stars.
at January 19, 2016
Email ThisBlogThis!Share to TwitterShare to FacebookShare to Pinterest