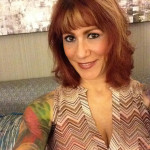 Dorothy F. Shaw lives in Arizona, where the weather is hot and the sunsets are always beautiful. She spends her days in the corp. world and her nights with her Mac on her lap. Between her ever-open heart, her bright red hair and her many colorful tattoos, she truly lives and loves in Technicolor!

Book to promote:
Technically, I would love to promo both books 1 and 2 in the series. If that’s not possible, then just go with book one in the series, Unworthy Heart. I’ve attached a promo photo showing both covers, just in case there’s room, but have only added the blurb and cover from Book 1 and a excerpt for that. If you want the blurb for book 2 as well, let me know. Feel free to use any of the teaser photo’s for Shattered Heart that I’ve attached as well.

A crush is just a fantasy. The real thing packs some serious heat.

When Cynthia Donnelly lays eyes on her high school crush at her brother’s wedding rehearsal, she regrets her self-imposed, one-year moratorium on dating. If possible, he’s even hotter now than when they were teens.

Back in school, Shane made a point to ignore his best friend’s cute, sassy little sister. Now that she’s grown into an incredibly sexy woman full of Irish spunk, resisting her is out of the question. Besides, in his book, all “hands-off” rules have expired.

One sizzling night together should have been enough. Instead, the heat rises, tempting Cyn to take a chance on a long-distance relationship and making Shane consider pulling up stakes and moving back to L.A.

Cyn’s recently dumped ex, however, has other ideas. His quest to get her back escalates into violence, shattering Cyn’s faith in herself, and in anyone else of the male persuasion, and leaving Shane with his work cut out for him to repair the damage—or lose his shot at a once-in-a-lifetime love.

Warning: This book contains a physical assault. Buckle up for a bumpy emotional journey with the characters as they fall apart and then slowly find their way to healing, and to each other. You might get angry or tearful along the way, you may even get frustrated, but as is with any good love story, it’ll be worth it in the end.

Product Warnings
Contains a lot of graphic, yummy sex. To those prone to lock their bedroom doors, fair warning. In this book, there are no doors, only windows. With no curtains. For those who aren’t afraid to keep their eyes wide open: Enjoy the show!

Opposites not only attract, sometimes they spontaneously combust.
The Donnellys, Book 1
Ryan Donnelly’s past relationship may have failed, but he’s determined to make single fatherhood and his career a resounding success. He’s got his eye on the top of the ladder at an L.A. marketing firm when his gaze snags on co-worker Maiya Rossini.
She’s a feisty, witty, tattooed redhead who’s nowhere near his type, but she pushes every one of his hot buttons.
Maiya clawed her way out of her dysfunctional, trailer-park childhood to earn a college degree and establish a promising career. Her future dreams are big, bright and packed with full-throttle fun, but when it comes to matters of the heart and men—especially stuffy corporate types like Ryan—her past slams on the emotional brakes.
In the office and in the bedroom, Maiya and Ryan rub each other in all the right ways. Though Maiya is everything Ryan didn’t know he wanted, he’s got his work cut out for him convincing her she’s worthy of love—or the bright light she’s brought to his life could slip through his fingers.

Ryan had high-tailed it out of the restaurant for a damn good reason. The short amount of time he’d spent next to Maiya at the table had been intense, and far too arousing. It was either leave and clear his head, or drag her into a corner somewhere and show her just how much her bitchiness turned him on.
The whole situation was crazy. Maiya was the type of woman he steered clear of. A rather hot stove he had no desire to touch again, yet his body didn’t seem to care about any of that. It took all of his willpower not to adjust the erection in his pants when they were sitting next to each other. Damn uncomfortable too.
Now he was heading back into the redheaded-hot burning building again because he just couldn’t stay away. He’d have to figure out a way to hang with her tonight and keep his distance from her at the same time.
Yeah, right. How the hell was that supposed to happen? She was like a damn sex magnet, all five-foot-eight of her, and his buddy in his pants was all for it. His head—the one on top of his shoulders—kept intervening to remind him she was supposed to be off limits. Not that it mattered though.
He had no issue with casual sex, but sex with Maiya would be anything but casual. The mere idea of her red hair tangled in his fist and her body bared just for him made his limbs tighten in anticipation.
Ryan ran his palm over his mouth and a muffled groan slipped past his lips. With one last command to his dick to behave, he got in his car and headed downtown to…to what?
Play with fire?
Test his control?
Yeah, that was it. Riiighhhtt.
No. He could do this. Under no circumstances would he have sex with Maiya. He would not kiss her lips. He would not paddle her ass for being such a pain in his. Moreover, he absolutely would not enjoy seeing her long legs in the air while he—
“Ah, Jesus. Knock it off.” Ryan clenched his teeth and started the car.
When he neared the main strip in front of their office, he spotted the two of them walking on the sidewalk. Well, well, well. There she is. Slowing, he rolled down his passenger window and then stopped alongside them. “Hey, there’s trouble with a capitol M.”
Maiya’s steps slowed and she looked over. “You have got to be kidding me.” She laughed. “That’s your car?”
“What? Yes. Why? You don’t like it?”
Maiya snorted and rolled her eyes. “Typical.”
Jodi laughed and Maiya resumed her swift stride.
Ryan threw the Porsche in gear and rolled forward a bit, keeping up with her. “What do you mean typical?”
She brushed a lock of hair away from her face. “Just what I said. Typical.”
Ryan shook his head. The comment, joking or not, pricked at his nerves. He was not typical. He was anything but typical. Damn this woman! Was it her life mission to agitate him? He sped past them and then pulled into the lot behind the pub and parked.
When Ryan stepped into the darkness of Flanagan’s, he glanced around in search of the pair. Maiya’s familiar laugh echoed above the low music and small crowd in the pub. The hair on the back of his neck stood on end and a bolt of heat shot down his spine.
Following the sound, he moved in her direction. Ryan paused before coming into their line of sight. They were in the back at a table. The mammoth stone fireplace, bordering the back wall, danced with flames behind them.
Maiya had one leg tucked beneath her. The other crossed over her knee, with her shoe dangling off her foot. Leaning back in her seat, her elbow rested on the back of the chair, and she absently twirled her hair around one finger. She stirred her drink on the table with the fingertip of her other hand. The blaze from the fireplace illuminated her profile and she glowed in the dim light.
Keeping his eyes trained on her, Ryan took a single step forward and she turned her head in his direction.
Their gazes locked.
Maiya arched one perfect eyebrow, pulled her finger from her drink, and sucked the liquid dripping from the tip. Holy hell. All the blood rushed from Ryan’s brain right to his dick.
Control tested, and he’d been served, failing right out of the gate. So much for that.Ryan drew in a deep breath and somehow managed to get his feet moving. The seat next to her was empty. Of course it was empty. So much for keeping my distance too.
Fine plan this turned out to be.

at February 04, 2016
Email ThisBlogThis!Share to TwitterShare to FacebookShare to Pinterest