TOMORROW AT 7PM PST TERI ANNE STANLEY AUTHOR OF: ACCIDENTALLY IN LOVE WITH THE BIKER 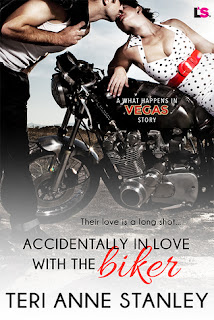 Justin Morgan would happily drown the pain of his injured leg—and the guilt he brought back from Afghanistan—in bourbon. Except, there won’t be any booze if he doesn’t rescue his family’s century-old distillery from financial ruin. The problem? Allie McGrath—youngest daughter of the distillery’s co-owners, and the one woman he can’t have.

Allie has been in love with Justin since…well, she's always been in love with him. Now he's home, broken up over the death of her brother, and he needs help. She can fix the distillery—she’s sure of it—but no one’s taking her or her sweet new idea seriously. Convincing Justin is her only hope.

Allie is more tempting than Justin expected, threatening a promise he swore he’d never break. If he can’t keep their attraction under control, there’s a solid chance they’ll send the whole enterprise crumbling to the ground…if he doesn’t crash and burn first.

TERI ANNE STANLEY has been writing since she could hold a crayon--though learning to read was a huge turning point in her growth as a writer. Teri's first stories involved her favorite Saturday morning cartoon characters, followed by her favorite teen idols.  She has also authored a recipe column (The Three Ingredient Gourmet), and scientific articles (Guess which was more interesting!).  Now she writes fun, sexy romance filled with chaos and havoc, populated by strong, smart women and hunky heroes.
Teri's career has included sex therapy for rats, making posing suits for female bodybuilders, and helping amputee amphibians recover to their full potential. She currently supplements her writing income as a neuroscience research assistant.  Along with a variety of teenagers and dogs, she and Mr. Stanley enjoy boating and relaxing at their weekend estate, located in the thriving metropolis of Sugartit, between Beaverlick and Rabbit Hash, Kentucky.
Affiliations:
Member, RWA 2012-present, Ohio Valley, and Louisville Chapters.
Secretary, Ohio Valley RWA chapter, 2013-2014
International Thriller Writers, 2013-present

at March 03, 2016
Email ThisBlogThis!Share to TwitterShare to FacebookShare to Pinterest