COMING FRIDAY LARRY LASWELL AUTHOR OF: VOWS TO THE FALLEN 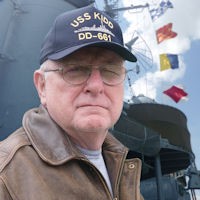 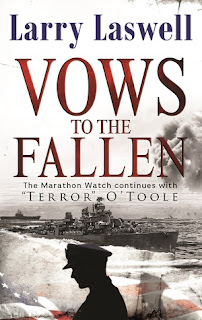 Born into a family of fishermen and sailors, Patrick O’Toole has always known the U.S. Navy was his destiny, and World War Two made it so. Assigned to the destroyer U.S.S. Green just months after the Japanese attack on Pearl Harbor, young Lieutenant O’Toole is devastated when his warnings about battle readiness go unheeded by the ship’s captain. As a result, the Green is destroyed and most of her crew lost while O’Toole is on bridge watch—a catastrophe that will haunt him forever.

Rising up through the ranks as the war surges on, O’Toole is assigned a new ship, and earns the nickname “Terror” from the crew he insists on pushing beyond their limits. Because Patrick O’Toole is a man plagued by the demons of self-doubt and dark memory, and never again will he allow brave American sailors to needlessly sacrifice their lives by following the flawed orders of incompetent officers. But his unspoken oath to his fallen comrades could lead him to the perilous brink of deception and mutiny—and in the chaos and fire of naval conflict he will be forced to confront hard truths about honor, duty, survival, and the staggering cost of victory.


Author Larry Laswell explores how a leader can emerge like a phoenix from the ashes of wartime tragedy in Vows to the Fallen, a moving and powerful tale that crackles with action and authenticity. Set in the Pacific theater during the dark years of World War Two, it is the enthralling story of U.S. Navy Lieutenant Patrick O’Toole. A natural born seaman but plagued by self-doubt, he is haunted by the memory of the devastating loss of hundreds of crewmates whose deaths resulted from the incompetence of a commanding officer. The thrilling chronicle of O’Toole’s rise through the naval ranks and his remarkable emergence as an unparalleled military strategist and leader of fighting men has all the makings of an enduring classic of World War Two fiction, as it carries the reader on a breathtaking journey from the bloody battle for Guadalcanal to the victory at Ubella Atoll and ending with the suicide mission at the Battle of Mujatto Gulf.

Larry served in the US Navy eight years. In navy parlance, he was a mustang, someone who rose from the enlisted ranks to receive an officer’s commission. While in the navy, he served as Main Engines officer aboard the USS Intrepid CV-11, and as Submarine Warfare Officer aboard the USS William M Wood DD-715.


Now retired, he fills his spare time with woodworking and furniture design. He continues to work on The Marathon Watch series, an upcoming Science Fiction series, and an anthology of over eighty humorous sea stories.
at May 18, 2016
Email ThisBlogThis!Share to TwitterShare to FacebookShare to Pinterest