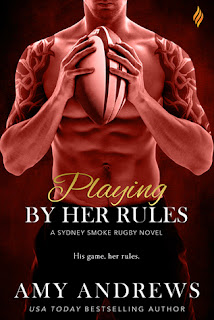 In this grudge match, the first to score…

When style columnist Matilda Kent accidentally lets slip that she was once involved with the captain of the Sydney Smoke rugby team, she suddenly finds herself elevated to the position she’s always wanted – feature writer. The catch? She’s stuck doing a six-part series on her ex. Still, there’s no way she can turn down a promotion…or the chance to dish the dirt on the guy who so callously broke her heart.

…could win it all!

Tanner Stone wants to be involved in a feature series about as much as he wants to snap an Achilles. But the thought of seeing Tilly again is a bonus—and has him more worked up than he wants to admit. Only he’s not prepared for how different she is – all cool and professional. His Tilly is still in there, though…and he still wants her, now more than ever. All he has to do is charm her into giving him a rematch. And this time, winner takes all! 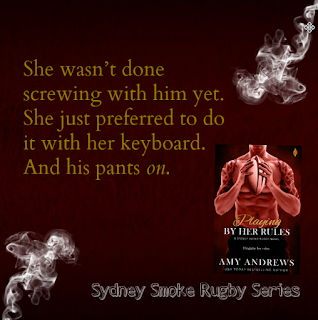 Amy Andrews is a multi-published, award- winning author of 50+ romance novels across both traditional and digital platforms. She writes for Harlequin Mills and Boon, Entangled, Harper Collins Australia, Momentum Publishing, Escape Publishing and Tule. She's sold in excess of a million books worldwide and has been translated into over a dozen languages. In her spare time she is a PICU nurse and mother of two teenagers. She lives on acreage on the outskirts of Brisbane, Australia but secretly wishes it was the hillsides of Tuscany.

at August 10, 2016
Email ThisBlogThis!Share to TwitterShare to FacebookShare to Pinterest