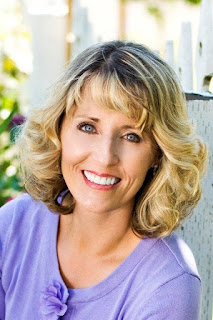 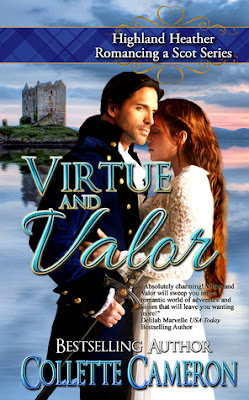 VIRTUE AND VALOR
Book One in the Highlander Heather Romancing a Scot Series, Book 2

Bartholomew Yancy never expected to inherit an English earldom and had no intention of marrying. Now, the Earl of Ramsbury and last in his line, he’s obligated to resign his position as England’s War Secretary, find a wife, and produce an heir. Only one woman holds the least appeal: Isobel Ferguson, an exquisite Scotswoman. Brought to Scotland to mediate between feuding clans, he doggedly woos her.

Disillusioned with men pursuing her for her attractiveness, rather than her unusual intellect, Isobel has all but abandoned any hope of finding a husband in the Highlands. Not only does she believe Yancy no different than her other suitors, he’s a notorious rake. She’s been told he’s practically betrothed. Therefore, his interest in her cannot possibly be honorable, and so she shuns his attentions.

When Isobel is mistakenly abducted by a band of rogue Scots, Yancy risks his life to rescues her. To salvage her compromised reputation, her brother and father insist she marry him. Yancy readily agrees, but Isobel—knowing full well she’s fated for spinsterhood by refusing his offer— won’t be coerced into marriage.

Can love unite a reluctant earl and a disenchanted beauty?

“My lord?” Her tone indicated anything but respect and deference.
“I would be honored if you joined me in a game of chess, Miss Ferguson.”
Her pretty lips curled into a wide smile. “I had rather hoped you’d pick fencing. I would have enjoyed having a go at you with my sabre.”
“You fence?” A vision of her derriere in snug, white breeches sprang to mind. He really had become a lecher.
“After my parents allowed Adaira to learn, Seonaid and I insisted we have the same opportunity.” She turned and climbed the risers. The sway of her hips, even underneath the thick cloak, tantalized.
Isobel peered over her shoulder, a siren’s smile on her lips. “I suppose it’s only fair to tell you. I’ve never lost at chess.”
Confident little thing, wasn’t she?
Yancy released a hearty chuckle. He quite liked this unconventional morsel of womanliness. “Surely, when you first learned the game?”
“At seven.” Isobel shook her head and more silky strands spilled from the loose knot. She gave him a falsely honeyed smile.
“No. Not ever, my lord.”
She proceeded up the stairs, her voice floating back to him. “By the way, your lordship, if I win, I’m permitted to leave the keep without two escorts.”

Available in Audio Too!
https://www.amazon.com/Virtue-Valor-Highland-Heather-Romancing/dp/B01L9KXT98/ 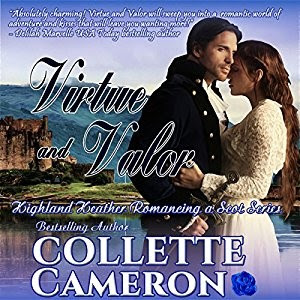 at November 03, 2016
Email ThisBlogThis!Share to TwitterShare to FacebookShare to Pinterest