THE COWBOY AND THE DOCTOR (The Gallaghers of Montana #4) 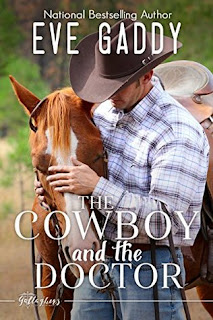 Dylan Gallagher loves playing the field. The only serious relationship he's ever had was with his horses and his ranch, and he had no intention of ever changing that... Until he met Dr. Samantha Striker, a challenge too tempting to resist. Samantha Striker doesn't fall easily, not even for Dylan and his heart-melting charm. But she can't deny that the more time they spend together, the steamier their relationship becomes. Soon, she finds that their relationship is more than just simple desire. When Samantha is threatened by a series of incidents, each one more terrifying than the last, she realizes that someone doesn't want her to be happy–with Dylan or anyone else. Can they find the man responsible before his actions turn from dangerous to deadly, and Dylan loses the woman he's discovering he can't live without?

I enjoyed the interaction of the couple in this book.  I really like how the author was all about showing the female character as a strong knowledgeable woman.  Yet, also too stubborn to allow herself the luxury to be vulnerable.
Which for Dr. Samantha Striker it could be very beneficial seeing she is an Emergency Room Surgeon.  But as Sam just the woman it could come off as plain stubborn if you didn’t take the time to know her.  She is actually a very kind and caring doctor.  She at her last hospital had done volunteering work in her community.  It had a bad incident that caused her to step back far enough to move the Marietta.
In Marietta, she is just staying to herself with her only real friend being Bianca Whitehall, a fellow doctor who is a partner at the same clinic with Jack Gallagher.  Jack is the older of three brothers all of which are doctors the fourth brother is a rancher which is Dylan.  There is Jack, Sean, Wyatt, and Dylan.  All are married but Dylan.  And word on the street is he is quite the ladies’, man.
Well, when Dylan’s foreman is kicked by his newest ward and brought to the ER and bleeding internally, Sam had to operate.  When she’s finished, Dylan was who she spoke with.  She couldn’t say much due to HIPAA even though the Gallagher’s were all the family Clay has.  The next day Clay gave consent, so they spoke again and many days thereafter.  Then she kept running into him until he asked her out.  She lied and said she a fake boyfriend.  No player for her.  No Way!
But when they both attend both attend Bianca’s birthday party he finds out what he had already known, there was no boyfriend, via her BFF.  All is forgiven.  She just couldn’t figure out how all his exes still liked him.  All of them even Bianca.  Yup. Bianca.  She gets talked into going to his ranch to go horseback riding since she hasn’t been since she left Texas which she misses.  How could she say no to a charming, loyal friend, and sexy as hell man who loves his family?  She couldn’t.
Their day of riding ended unusually by certain events that lead them into a more constant appearance in each other’s lives.  Some good and some downright dangerous.  See how this couple react.
I enjoyed this book.  I especially liked how the animals had such a healing effect not only on each other but for the human to animal.  But animal to human also.  I give this book. 4 stars.
at May 21, 2017
Email ThisBlogThis!Share to TwitterShare to FacebookShare to Pinterest