Firefighter Ashton Blaise is brave, handsome, kind, and can cook both on the stove and in the bedroom. He routinely saves animals from the flames. Women want him, all except Leah Allain, the new director of the local animal shelter, not even after he saves a kitten found in her burning house. Her resistance intrigues him as does the fact that her home was intentionally set afire.
Not totally immune to Ash's charms, Leah is determined not to get involved with another guy out of her league like the married man who took advantage of her. Responsible for her senile grandmother, this time she cannot pull up roots and run. Though she picks on Ash's few faults to drive him away, he keeps finding excuses to be part of her life. Can Ash start a fire in Leah's heart and keep it blazing?

This was an interesting ARC.  I was totally into it from the start it captured my attention right off.  The characters were fresh and opposite roles to the norm that we would see played out for each of their sexual roles normally.
You see Leah Allain has been terribly hurt in the past.  She was dumb enough to get involved with the vet she interned with then hired her full time.  The really dumb part she didn’t find out for sure if he was, in fact, getting a divorce before she got involved with him.  He was not.
So, once again his wife caught him again in the studio apartment at the vet hospital they owned together which she owned 51% with another woman not her in the bed.  This time it was Leah. Leah, being short small waisted with “D” sized cupped boobs, and larger hips made her a target for the older wife of three children.
So, she called her fat, ugly, and other things and said she was fired.  She didn’t know how she could fire her since they were divorcing.  When he tells divulges the bad news.  Yet, he thought that during the two weeks’ notice period that they could still carry on as if.  He also said the wife would be giving her a great severance pay to keep quiet. She left early to be with her grandma.
With her exit package, she has enough with what she had in savings to buy and old ginger bread home with a barn that was turned into a studio apartment for an artist.  Which is a good thing because her house burns down.
The captain of the fire department Ashton Blaise is the one in charge at the scene and the one that saved her kitten from her home.  There are a couple of weird things he notices about her.  One, she drove an old large tall SUV yet she’s short, curvy, but fast and agile.  Two, she was upset her home burnt yet not overly concerned it was looking like arson.  Three, when he gave his sexy melt your panties smile telling her he saved her kitty she seemed detached and wouldn’t take it.
For her being the new director of the animal shelter and the talk of the Parish on Chappell, Louisiana of her being the “Cat Lady” it seemed odd.  But he found her sexy as hell and sassy too but most of all independent and knew her own mind.  All the things you look for when looking for someone to pair with as a partner when you’re a firefighter he found out the hard way.
Opposites attract is what you could say about these two is what you say about these two.  Cute until this ARC stops at page 122 I think when there are 3oo and something pages in the whole book.  Not cool.  I don’t know if it was the author or the publishers that thought this was a good idea to put it out this way but it sucked.  For this alone, I have to give it 4 stars.
Now what is sad I enjoyed this story enough to not leave my readers hanging and I wanted to know what happens too.  So, giving the author the benefit of the doubt it was an enjoyable story.  I thought the characters were well thought out and extremely funny during the 122 pages and more serious as the relationship between the characters develop.  Not totally sobering just not as funny as the first half.  So, 3 stars.


I was not disappointed with the ending at all this time.  I did give it a 4 star but had I been given it this way at the onset when given the ARC it would have been 5 stars.  Provided by netgalley.com.
Follow us at www.1rad-readerreviews.com.
See below... 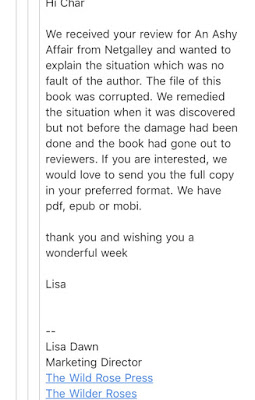 After receiving this letter I know that they didn't have to send this to me.  But they did take the time to do it.  I want to say it did make a difference with me.  As an up and coming reader to know that they did not put this on the shoulders of the writer.  I know there are a lot of reviewers that come on and slam and I mean slam an author because of the grammar and spelling and I have to say some yes is bad.  I have to say.  I am awful with it.  When it could be who input it.  Thank you.  I am going to go and change this book to what I would have given it had it been given to me in the correct form.  And didn't have to buy it myself.  It used to be Kindle used to give us updated versions of books from authors/publisher but I didn't see anything for that when I was looking before I bought.  Too bad this would have been a good time.  4 star.

at July 19, 2017
Email ThisBlogThis!Share to TwitterShare to FacebookShare to Pinterest