LET'S WELCOME OUR GUEST AUTHOR: AUDEN DAR AUTHOR OF: PRELUDE BOOK ONE IN THE INTERLUDE DUET 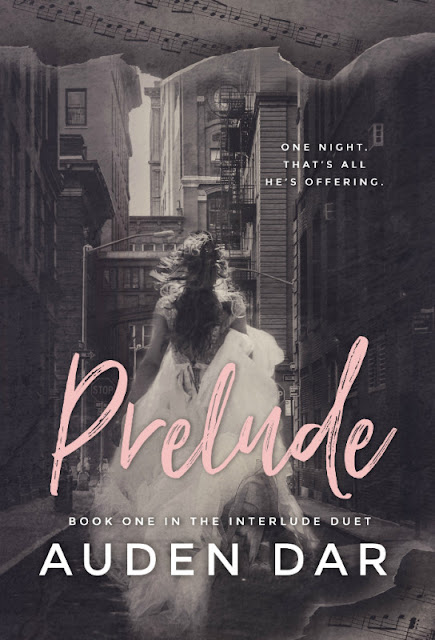 Rad-Reader:  What was the driving force behind this story?

Auden:  Death and how it affects the relationships we have with others and ourselves.  It sounds quite macabre but that’s the truth.  Readers were surprised that my heroine had stayed with her partner for years even though it was quite obvious she had been unhappy for some time.  In Lina’s case, she had lost so many of her loved ones, and Andrew is a part of her past that she clings onto.

Auden:  My husband had dinner with a friend and was quite perturbed by they had.  His friend had casually mentioned that he and his wife have scheduled sex once a week at the same time.  I couldn’t imagine doing that.  Later that night, I sat down and wrote the scene between Andrew and Lina.  I had no idea I was giving birth to the Interlude Duet.

Rad-Reader:  Andrew was there for her through all her hard events and had passion at one time.  What happened to him?

Auden:  Sometimes we take our relationships for granted and forget what, or rather, who means most to us.  And there’s also the underlying fear of not being able to give the person you love what they want.

Rad-Reader:  What was it that scared him that he backed away from their life that he even used sex against himself and her?

Auden:  Andrew has several issues.  One of them is not being able to confront them.

Rad-Reader:  Somewhere along the line Lina has lost herself like Julian tells her.  What do you think cases that discord?

Auden:  Sometimes we tend to lose ourselves when we’re in a long-term relationship.  Especially when we’re always worried about pleasing the other person. This is something I wanted to explore when I started writing “Prelude.”

Rad-Reader:  Patty is a good friend to her also who keeps letting her know she is worth more than what little affection Andrew gives.  What made you think of her birthday gift?  Too funny?

Auden:  I love Patti.  If I had a girlfriend whose needs were being unmet by her partner, I wouldn’t hesitate to buy those gifts for her.

Rad-Reader:  I loved Rodger at the beach, watching the man with his dog when he was having cocktails with Lina.  They were both lusting after the same guy.  That was way too funny.  What made you come up with that scene?

Auden:  My husband used to play with our bulldog on the beach.  I was pregnant at the time and just remembered utter contentment while I admired my hubby, sitting side by side, with our bulldog as they watched the waves.  I had been with my hubby for years and I was still lusting over him.

Rad-Reader:  You used a lot of musical references to your book is music important to you in your life?  I loved it.  I actually used it to read that portion it was mentioned as I read along so I could see where your head might be.

Auden:  That’s awesome!  I’m so glad you did that.  Music is an integral part of my life.  I play the piano and cello.  I graduated from the “Fame” high school in NYC.  And for several years, I was an artist and repertoire music executive for a major label.  I have a pen name because I still consult on the side and work with songwriters and producers.

Auden:  I love your actor choices.  When writing my heroine, I was inspired by Christy Turlington’s beauty.  I love your idea of Blake Lively for Lina but she would need to darken her hair.
https://www.pinterest.com/pin/7248049374238346/

Rad-Reader:  What song best describes your couple or your book as a whole?
“Craving You – Thomas Rhett ft. Maren Morris”

“Haunting”  by Halsey
represent Julian and Lina’s relationship in Prelude.

Rad-Reader:  Was it hard bring this book to print?

Auden:  Yes, it took a great deal of time because I had originally written the duet as a standalone.   There were also many times when I was filled with so much self-doubt, I couldn’t even send ARCs out.  I almost didn’t release “Prelude.”

Rad-Reader:  How do you go about your writing process?  Are you a pantser or do you do outlines and all?

Auden:  I write as I go. Sometimes, I’ll start typing on my phone while cooking dinner.  Or I’ll be out and I’ll start jotting notes on whatever is handy at the time.  Moleskin notebooks are the best.  And when I’m ready to sit down and write, I just go with the flow.  I don’t worry about editing until I’m midway through the book.

Rad-Reader:  What would you tell a new writer that might help them if they are thinking of publishing?

Auden:  Write, write, write.  Without words, you don’t have a story.

Rad-Reader:  What do you like to do with your free time?

Auden:  Besides enjoying my hubby and son’s company?   I enjoy discovering new authors and books.  Music is big passion of mine and I also compose songs.  I’m thinking of learning a new instrument, possibly the oboe.  And I love watching foreign films.

Rad-Reader:  What is your favorite type of music since you used several pieces in the book?

Auden:   I grew up listening to classical music.  I seriously listen to everything.  Last week, it was all about Latin composers and artists.  This week, it’s a mix of R&B and rap.

Auden:  Interlude (Book Two) releases in January 2018.  I currently have a WIP that I hope to release late Spring 2018.  But who knows?  I’m a slooooow writer.

Rad-Reader:  If you could go to any theme park which one would it be and why?

Auden:   It will always be Disneyland because that’s my son’s favorite place.  It really is the happiest place on earth next to Disneyworld.

Rad-Reader:  Where can our readers buy your book?  Provide links.

Auden:  Prelude can be purchased at Amazon and at Barnes and Noble.  I hope that in a few weeks it will be available on iBooks.

Auden:  I’m pretty bad with social media.  However, feel free to stalk me at

at November 17, 2017
Email ThisBlogThis!Share to TwitterShare to FacebookShare to Pinterest