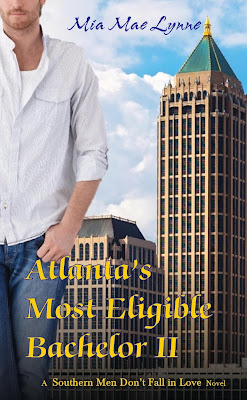 Beautiful and successful, Lisa Dunbar didn’t need anyone or want anyone until she met Doug Bader, Atlanta’s Most Eligible Bachelor. The lawyer was nothing that she thought she’d ever want. Stuck up, conceited, commitment-phobic, and white. When she said it was over to her family, she never expected for him to propose that same week. And never expected that she’d say yes so easily to his Southern charm.
Doug Bader, the pride of Whitman Stacks’ legal team, has never been more serious than the moment he asked Lisa to marry him. And he couldn’t be happier about that choice. With her smart attitude, strong personality, and deep convictions, she’s the perfect woman for him, no matter what anyone says about the color of her skin.


But now, with unexpected news on the way and their families weighing in on the intensity of their relationship, will the love Doug and Lisa share between them be enough to withstand the wait to their wedding, or will their Southern Romance fizzle and burn out under the hot Atlanta sun?

Chapter 12:
Lisa and Doug rose early on Saturday morning with a full day of activities scheduled.
Lisa was spoiled by the fact that Doug was always up first to make coffee. She was never one to make a big deal about breakfast but now she had to be concerned for her and the baby. Doug scurried around in his morning hyper mode when she walked into the kitchen. He stopped what he was doing long enough to give Lisa a hug and a morning kiss before moving back to the egg whites frying in the nonstick pan, no butter or salt.
“Decaf for you and 4 ounces only.”
As Lisa sat, herself at the table, Doug zipped a small teacup in front of her and kissed her on the forehead.  She inhaled the brisk smell of the beans and sighed it back out. “Doug, what does your brother think about our engagement?”
Doug paused at the stove and turned to look at her with the spatula half raised. “He was a little surprised but happy for me. I’m glad we’re going to dinner at his house today.  I know him and his wife are anxious to meet the woman who took Atlanta’s Most Eligible Bachelor off the market.”
He turned up Lisa’s favorite R & B station and started singing along. He butchered a few of the words which made Lisa laugh.  He changed to a top forty station and started singing a song that he was familiar with. He extended his hand silently requesting that she dance with him.
Grasping her hips and pulling her tightly next to him he started swaying her from side to side.  He rubbed his scratchy cheek next to hers, taking in a deep breath closing his eyes and serenading her.
Lisa’s heart was pounding fast and breakfast was the last thing on her mind as Doug had her wrapped in his arms.  She squeezed his arms tightly and looked up into his eyes.  Whatever may have been on her mind was now gone as she pulled him in tightly for a passionate kiss.
Gently moving Lisa away Doug brought himself back into focus and gazed into Lisa’s eyes.  “Breakfast first, and then, rest.”
“I’m not hungry yet.” She lightly kissed his lips.  He laughed and motioned for her to go back to the table.  She pretended to pout as he made a plate for her.
“I’m still not hungry yet.”  She said as she stood up to leave the kitchen. “I’m going upstairs.  Joining me?”
“You bet I am.”

My name is Mia Mae Lynne, author of the contemporary multicultural romance series Southern Men Don’t Fall in Love. I would love to tell you about my journey of bringing this series to life.
I started writing the books in 2008 and named the series The Chronicles of Fate. Life events happened and I had to put away the series; death of my father, 20-year marriage dissolved, unemployment, health issues, and a host of other life-changing events. Up until that time, I had eight books written. The first book was titled Tempting Fate and the series was copyrighted in 2010.
In 2015, the first release was published. The series was renamed to Southern Men Don’t Fall In Love, and the first book was retitled to Atlanta’s Most Eligible Bachelor.  I currently have five releases in English and two releases in Spanish. El Soltero Mas Codiciado de Atlanta is in European Spanish and Spanish of America’s.
My son Carlos translated the first book into Spanish and called two of his friends to edit the books. All three books released November 4, 2015, which is Carlos’ birthday. I’m not versed in the Spanish language but both of my children are bilingual. I’m planning to have more of the series translated so if you or someone you know reads Spanish language romance books, more releases are coming at a date to be determined in the future.
I am self-published through Book & Spirit, LLC, and I release twice a year. The second release date is April 26th, which is my youngest son Marcus’ birthday. I may add additional dates in the future.
During the release of my first book, I met my current editor, Lex Hupertz. She designed my covers and edited my books. I could not stress enough the importance of an excellent editor and specifically, one that understands your writing style as well as assists you with the development of your work. It makes a difference in a decent book to a great reading.
My series is about family connections, trials, and tribulations, love, and loss. It’s also about six degrees of separation. As the series progresses, my readers will see how the characters relate to their families beyond the romance. Immediate families have a major influence on our romantic relationships which is the reason why I gave them a very present voice in the romance and don’t focus solely on the couple and their interactions with each other.