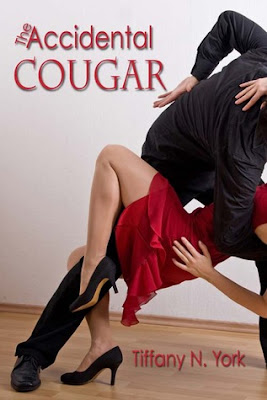 Tiffany:  As soon as I turned 40, all these much younger men started crawling out of the woodwork to ask me out. Like men in their early 20s! This had never happened to me before. Hell, I had never even heard the term "cougar" before. I think young men believe older women are the holy grail of sex or something.

Rad-Reader:  Have you ever know anyone in this situation?  Especially, when these days the name is not worn the same way or looked at the same way?

Tiffany:  I've known a few women who have gone on to marry much younger men. Those couples have as much chance of working out as any other couple. Unfortunately, Ashton gave a bad name to successful cougar relationships by cheating on Demi with a younger woman, but that says more about him than her.

Rad-Reader:  Have you seen more of a trend of couples going in the so-called cougar direction as opposed to the accepted older male with a younger woman?  When researching for the book?

Tiffany:  Let's just say I was surprised to see so many cougars dating sites and Facebook pages celebrating cougars out there while I was doing research.

Rad-Reader:  What was the biggest part that scared Nicole about Wil’s age?

Tiffany:  That he'd eventually leave her for a younger woman.

Rad-Reader:  Was it what other’s people would think or that she might actually find happiness with him then what would she do with him after the six weeks?

Tiffany:  Taking a chance on another relationship after a serious relationship and/or marriage hasn't worked out is always tough and a huge leap of faith. The old hurt coupled with odds stacked against the new one would cause anyone to second-guess any possibility of success. It's much "safer" to keep things casual, without becoming emotionally invested, which is what Nicole had planned to do in the beginning. Wil's age made him perfect fling material; she never dreamed he'd become more.

Rad-Reader:  When Wil’s phone rings off the hook at her house he leaves, then when he says he’ll come back for a swim & it rings again at the pool.  Then she says he needs to be someplace an hour ago.  Why does he lie to her?  Why does he build on the mistrust?

Tiffany:  It's one of those situations wherein the beginning of a relationship, you're on your best behavior and you don't want to do or say anything that may ruin things. In Wil's case, he simply figures it's too complicated a story to explain. Plus, he likes to take care of everyone in his life and fix things, so his knee-jerk reaction is to take care of the situation with Sonia, so he can quickly return to Nicole.

Rad-Reader:  Is that Wil’s youth or his lack of liking people knowing his business and lack of trust?

Tiffany:  Youth has a lot to do with it. Acting without thinking of the consequences, but it also has to do with his personality as well--dynamic, take-charge, impulsive.

Rad-Reader:  Nicole and her friends were very open about a lot of subjects.  Open to new experiences too.  Yet, their comments about Wil’s age at first left her with real thoughts of him being too young.  Do you think it caused Nicole to worry more about the age difference?

Tiffany:  Absolutely. I think most women take into account what their friends have to say about a man. Doesn't mean they'll ultimately take their advice, but they'll definitely listen. (Although if I had listened to my friends' advice about a few of the men I dated, wow, would I have been better off!)

Rad-Reader:  Will there ever be any follow up to these characters and their lives?

Tiffany:  I don't think so. As an author, I usually like to move on from books and create an entirely new world, rather than return to a previous one.

Rad-Reader:  Nicole’s Nana bestowed a lot of good wisdom on Nicole about relationships.  Why didn’t Nicole adhere to any of it?

Tiffany:  Because Nicole is stubborn and strong in her opinions!

Rad-Reader:  Her ex-gives her some unexpected news at the end that frees her up.  Why did it take her so long to allow herself the closure?  Was it the family values she was raised with?  You think?

Tiffany:  Nicole believed you get one major relationship in a lifetime, and certainly only one marriage. The bond you have together when you have a child is incredibly strong and it's difficult to let the dream of a perfect family go. I know from experience that you don't have to even like your spouse anymore, but sometimes you're willing to keep fighting for the relationship for the sake of the children.

Rad-Reader:  Nicole lies nearly cost her.  Why do you think she lied?  She was helping a friend.  It wasn’t like Wil hadn’t bailed on plans before.

Tiffany:   It's a delicate subject whenever there's another man involved. Insecurity and jealousy often factor in, especially when another man is interested in you. Most men don't react well to competition (real or imagined) and it can cause tension and fighting, so rather than upset Wil, Nicole decided it was better to remain mum about the whole sordid situation. She never dreamed it would come back to bite her in the ass.

Rad-Reader:  If your book was made into a movie would you like to play…

Rad-Reader:  What song best describes your couple or your book as a whole.  It can be more than one.


When Nicole & Wil get a taste of each other with that first kiss.

"You Don’t Do It For Me Anymore – Demi Lovato"

What Wil told her when he caught her in a lie.

"Tell Me You Love Me – Demi Lovato"

When Wil had broken things off.

When Nicole was battling with whether it was love all the time with Wil.  Or if her mother got in the way of her being a Woman after the divorce.  Can she love Will a 25-year-old Man?

"Worth It – Danielle Bradbery"

When Nicole was asking Wil to love her.

Tiffany:  Book as a whole:

What Wil told her when he caught her in a lie:

When Wil had broken things off:


When Nicole was asking Will to love her.


Rad-Reader:  What is your next project and when is it coming out?

Rad-Reader:  What was your favorite book as a teen?

Tiffany:  Cliché as it is, it was Forever by Judy Blume. She can do no wrong as an author in my eyes, and if I ever meet her in person, I'd handcuff myself to her wrist and ask her to take me home with her so I can pick her brain (Kidding. Kinda).

Rad-Reader:  Have you always wanted to be a writer?

Tiffany:  No, I wanted to be an actress, but alas, my introverted nature won out. I'm the type of person who has no need to leave home for a month just as long as I have books, Wi-Fi, and food (in that order).

Rad-Reader:  How long did it take you to get your first book published?  Was it self-published or a publisher?

Tiffany:  Yeesh, like 100 years! I wrote my first novel in 2000, received a million rejections, put it aside, had a baby, became a single mother, and eventually wrote The Accidental Cougar because I desperately needed laughter and levity in my life. It was published by The Wild Rose Press.

Rad-Reader:  Your favorite type of music?

Tiffany:  I'm an 80s chick at heart, which according to my teenage son, is the dinosaur era.

Tiffany,
Thanks so much for all that you did to get this to us.  You had a busy weekend to get things done and a very important life event.  So, thank you for taking the time.  You are now a 1 Rad-Reader Misfit so please come back anytime and use our Shout Out: An Author's Place to let us all know when you have another book coming out.
Good Luck you and Congrats,
Char

at February 16, 2018
Email ThisBlogThis!Share to TwitterShare to FacebookShare to Pinterest