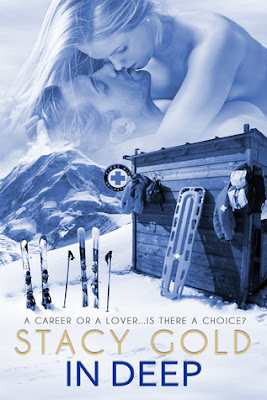 Sophie Tremore is trying to build a career in the male-dominated world of Ski Patrol. Hard to do when her new boss is her smokin’ hot ex-lover. She hasn’t forgotten how he made her body tingle and her heart pound, although he’s making it a lot easier by treating her like she’s incompetent—when he’s not ignoring her existence altogether.
Emerald Mountain Ski Patrol Director Max Demford has been doing his best to avoid working with his feisty former flame, given his judgment is clouded by those eight mind-blowing weeks two years ago. Ski patrol is dangerous enough, and no way could he handle another person he cares about getting hurt on the mountain.
Forced to work together, their simmering attraction becomes difficult to ignore. When Sophie gets caught in a slide, an adrenaline-filled day could turn into a spectacular night they will never forget—one that could risk both their careers. 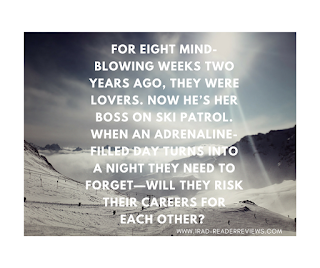 Emerald Mountain Ski Hut Caretaker Morgan Monroe doesn’t do casual relationships. Not anymore. Certainly not with the obnoxious, flirty, too-hot-for-his-own-good chef she’s wanted to strangle all season. He’s the kind of man she wouldn’t date in a million years, even if he were the dating type.
Chef Dan Griffin doesn’t believe in relationships. But a one-night stand to celebrate the end of ski season? Hell yes! Especially with the gorgeous caretaker. She’s sexy but melt-in-your-mouth sweet, the kind of woman who could convince a man to get serious…if he were the relationship type. She kept her distance all winter, but he’s hoping he can convince her to get closer for one night of passion.
When things heat up on a cold winter’s night, will they play it safe or follow their hearts? 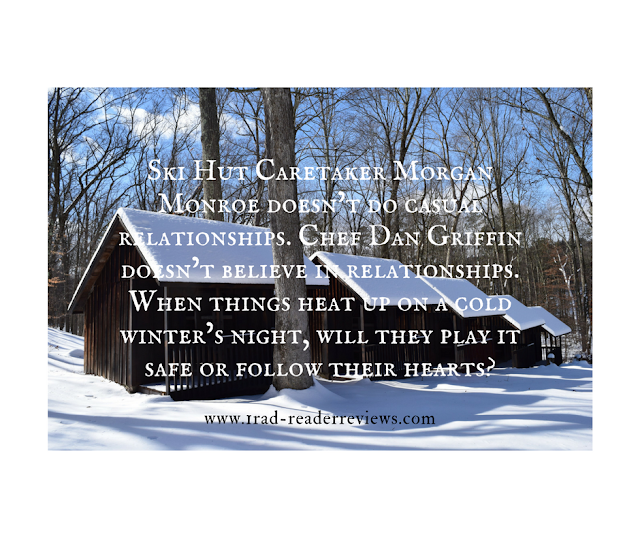 My phone vibrated against my thigh. I balanced my stack of boxes on the seat of my snowmobile, pulled off my glove with my teeth, and fished it out.
“Hey, Sam, what’s up?” I crossed my fingers and stared up at the sky, just going lighter blue to the east. My breath puffed out in white clouds in the light from ski area lodge, where the early shift was prepping breakfast. Same thing I needed to be doing, but Sam’s news came first. For sure.
“I got in. Full scholarship.”
I punched my fist into the air. “Wahoo!” This was about to be the best, last day of the season ev-ER. “I knew you could do it.”
“I couldn’t have done it without you.”
“Awww, come on. You’re the one with the engineering brain and the good grades. All I did was listen to you read your essay.”
“Don’t sell yourself short. Your suggestions were spot on. And you’re the one who made sure I always made it to class. And had a hot breakfast.” Her grin came through in her voice. "Critical building blocks of success.”
“Whatever.” I fidgeted with the flap of the box on the top of the stack. “I’m just really proud of you, Sam I Am.”
“Thanks, Daniel. You’ll come visit me at Dartmouth, right?”
“You know it. And we’ll celebrate together tomorrow night.”
“I can’t wait!”
A thump and muted voices came through the line.
“Hold on, Mom wants to talk to you. See you tomorrow!”
Switching my phone to my gloved hand, I stuffed my bare fingers under my armpit before they froze solid.
“Daniel, when should we expect you?”
“I ought to be home by five. Want help with dinner? I can pick up groceries, and make that pineapple upside down cake Samantha loves.”
“Yes, please. I’ll email you a shopping list.” She paused. “I’m glad you’re coming home. It’s been too long. The girls and I miss you.”
“I miss you, too. It’ll be weird when Sam leaves for college.”
“It will.” Her voice went low and soft. “The house is going to be so quiet with all three of you gone.”
“Awwwww, Mom. It’s not good for you to be alone. Maybe you should try dating again?” Not that she could ever replace Dad, but still. He’d been gone eighteen years. It was past time, and Mom deserved to do something for herself.
Her laughter came in a short, sharp burst. “I’m too old to start dating.”
I pictured her in our sunny yellow kitchen, lips pursed, hand on her hip. Her light brown eyes tight at the corners. The way she’d always looked when I pleaded permission for something she didn’t want me to do.
“No way. If I was twenty years older, and not your son, I’d be begging you for a date.”
This time when she laughed, the loneliness I’d heard before was gone. I grinned.
“I’ll make you a deal…” she said. “I’ll start dating when you do.”
“Ha. Good one, Mom.” Not like that was gonna happen anytime soon.
Lights came on in the lift shack at the base of the gondola. “Listen, I’ve got to run or I’ll be late. And hungry backcountry skiers can get violent.”
She laughed again. “Well, we can’t have that. The hut is a long way from first aid.”
I smiled. “Give Sam a hug for me, and I’ll see you all tomorrow night.”
“Okay. I love you. Be safe.”
“Love you, too.”
I shoved the phone in my pocket and did a little dance. Hella good start to my last day. If everything went according to plan, I’d be doing another kind of dancing tonight. With Morgan.
****
The roar of Dan’s snowmobile engine grew louder, and the ache in my jaw informed me I’d already started grinding my teeth.
I ducked down and reached deep into the back of the cupboard with my damp sponge. The ear-splitting rumbling ceased remnants of it echoing through the valley. Cleaning the hut and locking it down for the season would take all day without interruptions. I wasn’t going to have an uninterrupted day.
Boots thudded on the stairs.
Nope. My solitude was going to end in three…two…one…
The door crashed open. “Good morning, beautiful! How’s my girl doing?”
Dammit. I ignored the booming voice and kept wiping. Ignored the ache spreading from my jaw to my temple.
The rustle and thump of boxes landing on the counter filled the space. I’d liked the quiet just the way it was.
“Get ready. Big group coming in this morning and I’m whipping up my world-famous Eggs Daniel.”
I swear he never stopped talking. Maybe if I ignored him, he’d be quiet until the guests arrived.
“I hope you’re hungry, because I put my whole heart into this recipe, and I’m dying to get a little piece of me, inside of you.”

at March 08, 2018
Email ThisBlogThis!Share to TwitterShare to FacebookShare to Pinterest