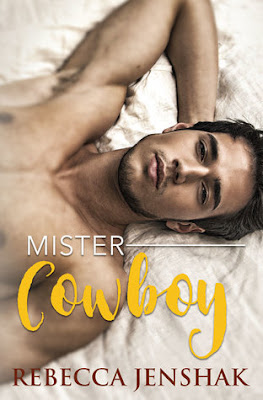 Rad-Reader:  Where did you come up with the idea for this storyline?

Rebecca:  I always start with the characters - specifically in this case with Brecken and how he'd left home with a chip on his shoulder and set out to conquer the world.


Rad-Reader:  Will it be part of a series?  If so, will we see any of the current characters carried over?

Rebecca:  Yes, I plan to write Henry's story as well as Tina's.

Rad-Reader:  Tell us a little about January and Breck?

Rebecca:  January is the daughter of an esteemed politician trying to figure out who she is and how to let people in. Brecken is a nerd turned successful CEO who is finally feeling like he's found his place in the world... only to have it all questioned by returning to the ranch and meeting January.

Rad-Reader:  How did you come up with their characters?  Or did they write themselves?

Rebecca:  In this case, they wrote themselves. I roughly sketched out Brecken & January's backstories, but once I put them together they wrote the rest!

Rad-Reader:  How do you go about naming your characters?

Rebecca:  First names come easily, but it took me awhile to get the last names. A lot of trial and error until something stuck.

Rad-Reader:  Have you had to change them during editing before because they thought they didn’t work?

Rebecca:  I did change one name in the book during edits. Carrie was originally Mary but I didn't like that it was Mary & Michael.

Rad-Reader:  Brecken has a love-hate relationship with the ranch after the news he received at eighteen.  Couldn’t he change out the gates and level the house since he loves the land?  Creating new memories?

Rebecca:  Brecken has a strong sense of responsibility. Even though he doesn't want to be a part of the ranch, he wants to honor his family name.

Rad-Reader:  What is it about her father that January dislikes?

Rebecca:  I think like a lot of people, January has issues with her relationship with her father that she hasn't communicated and they've built up over time. Her main point of contention is that she doesn't know where his public image ends and how much of his love and attention are genuine.

Rad-Reader:  Does Tina have a thing for Timothy?

Rad-Reader:  Brecken seems to really like January but I get the impression, not in the relationship kind of way.  Why?

Rebecca:  January is intriguing to him at first because she's beautiful and then because she's a challenge. As he gets to know her, I think it's the way she grounds him and reminds him what's important. He's finally made it doing exactly what he set out to do, but he's not happy or at peace with himself until January pushes him into dealing with his past.

Rad-Reader:  Why did his parents wait so long to tell him about Henry?

Rebecca:  I think each of them - Sam and Louisa - had their own selfish reasons for not telling the truth. They'd started new families and I think they tread around that until coming clean felt like it wasn't an option.

Rad-Reader:  At that point why even tell him?  Why not just let it go?

Rebecca:  They don't tell him - at least not until the secret has been uncovered by someone else.

Rad-Reader:  Brecken couldn't let go of his anger after finding out the family secret wanted answers and accountability from those already dead.  What was he expecting to hear or read really in those journals?  His dad said over and over he was sorry.

Rebecca:  Brecken wants to understand his father. He waited until it was too late and now the journal is the only way for him to gain any type of understanding of who he was and why he did the things he did. He also sees it as a map for his own life.

Rad-Reader:  Louisa is really the reason he should be angry, for not getting the truth. Why was he not mad at her?

Rebecca:  Simply because she's not his mom.

“Fool For You Love – Marc Broussard”
Figuring out that all he wanted was to be around January.

“Do Right Woman, Do Right Man – Marc Broussard”
When Breck was having trouble making a decision.  January said she wouldn’t make him choose, forcing him to make a choice.

“Human Diary – Danielle Bradbery”
When January was told by Brecken he couldn’t continue to be with her.

“Love in a Bar – Ryan Hurd”
When Brecken found out the truth he about his secretary, he crawled back to January for love.

“Ain’t No Way – Demi Lovato”
When at the hospital and she couldn’t believe his words after he hurt her so badly with his rejection.

“Body Say – Demi Lovato”
When they can’t keep away from each other….

“I’m Gonna Love You – Murphy Elmore”
When Brecken comes to her with his everything, letting her know all his truths.

"Don't Let Me Down - The Chainsmokers"

Rebecca:  I love music, but I don't spend a lot of time seeking out certain bands or songs, I just listen to whatever is on the radio.

Rad-Reader:  If you couldn’t be a writer what would you be?

Rebecca:  I'm a technical writer by day so I guess that :)

Rad-Reader:  What would you tell the young writer out there just starting out?

Rebecca:  I'm a technical writer by day so I guess that :)

Rebecca:  I just finished writing a standalone, unrelated to any of my other books or characters, and I hope to release that sometime this summer. I'll be writing Tina's story this spring and then Henry's story and hope to release both late 2018 or early 2019.

Rebecca:  All of my books are on Amazon and are enrolled in Kindle Unlimited.

Rebecca,
Thanks so much for being with us.  Loved the tiers of this story.  It was like peeling an onion in how Brecken went about finding his path out of the past.  Thanks again.  Thanks for your time.  You are now a 1 Rad-Reader Misfit.  Make sure you stop by and use our Shout Out: An Author's Place when you have a book coming out.
Char

at March 16, 2018
Email ThisBlogThis!Share to TwitterShare to FacebookShare to Pinterest