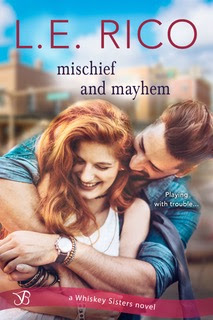 Welcome to Mayhem, Minnesota, home of the Knitty Kitty, The Little Slice of Heaven Pie Shop, and O’Halloran’s Pub—owned by the four young women known as The Whiskey Sisters.

In the wake of her divorce, Jameson O’Halloran has gone man-vegan. And this is one diet she’s determined to stick with. Even when her long-lost ex-brother-in-law shows up looking like two scoops of double dutch dipped in chocolate… She’s not giving in.

It’s been a decade since Scott Clarke left his family and his hometown, never to return. But when tragedy strikes, he finds himself dragged back to the land of gossip, judgment, and the one woman he absolutely, positively, without a doubt can never have. His brother’s ex is off-limits. He just needs to keep repeating that to himself until it sinks in.

“What? Do I look that bad?” he asks.
“No, you look fine. Fine. Yes. Nope, you’re good. Good, good…I was just…” I scramble for some reasonable excuse to be staring at him. “I—It’s just that I couldn’t help but notice your tattoo.”
Yes! Brilliant save, Jameson!
“Oh, you know, I forget it’s even there sometimes,” he says, bringing his smooth, broad chest closer to me so I can get a better look at him. It. At it. The tattoo…
He’s pointing to the image on his right pectoral muscle, a vibrant orange skull intricately decorated. It has a bright array of red and pink flowers and small jewels adorning it.
“They call this a sugar skull.”
Before I can help myself, I reach out to touch the colorful picture that takes up a large section of that side of his chest. I pull away before my fingers make contact.
“It’s okay,” he assures me, taking my hand and pulling it to his chest. “You can touch it.”
I keep my hand there for a beat longer than I should before reluctantly extricating myself. “Well, I...uh...I think it’s beautiful.” I glance down at my watch. “Oh! I’ve got to get the chicken in the oven.”
I start to turn toward the other naked flesh in the room.
“So...a toothbrush?”
“Of course! Sorry, yes, I, uh, I think I saw a sex pack—sorry, six-pack. There’s a six-pack of toothbrushes in the hall closet.”
Holy hell! What was that? I try to appear composed, even as I feel the two hot, red spots that are forming on my cheeks. He chivalrously turns to leave before I’m in full-on beet mode, but not before I catch a little color on his face, too.

Conducting student Kate Brenner is caught between her father—a detested senator determined to defund the arts—and her peers—who are convinced that she shares his politics. Extraordinarily gifted but alone and lonely, the graduating Master's candidate struggles to get through each day with her dignity intact.

Young professor Drew Markham doesn’t really hate Kate—it’s just that she reminds him of a dark part of his past. But when fate throws her into his path—and his care—he finds himself torn between his grief for the woman he lost and his feelings for the one he’s found.

The fire is warm, the pillow is soft, and the music of Bach is filling my dreams. But somewhere from deep inside my slumber is the nagging sense in the back of my mind that I need to get up and check on Katherine. My eyes flutter open and I’m peering into the familiar glow of my fireplace. I’m wide awake now, I’m certain of it. And yet, somehow, the Bach from my dreams has spilled over into my reality.
Because I’m not dreaming it, I realize suddenly. I get off the couch where I seem to recall being with Katherine before we both passed out from exhaustion. When I turn around, I see her. But she doesn’t seem to notice me as I move slowly in Bach’s direction until I’m standing behind Katherine as she plays the piano. I don’t let on that I’m there, I just stand in silence, in the shadows, where I can see her hands on the keyboard.
There’s a famous scene in the old movie, The Miracle Worker in which teacher Anne Sullivan tries, with unrelenting persistence, to reach into the dark, silent world
of Helen Keller. In one iconic scene, Anne spells the word “water,” with her fingers, into Helen’s hand. As she does this, she puts Helen’s hand under the water, trying to get her to
make the connection between it and the word being spelled into her hand over and over again. Those five letters cause an epiphany, an instant of understanding so explosive that
it blows a hole through the previously-impenetrable wall of darkness and silence, bringing color to Helen’s blind eyes and music to Helen’s deaf ears.
As I stand here my mind recalls this image so clearly, with such potency, that it nearly knocks me off my feet. And I watch. Katherine is seated on the bench, eyes closed and head tilted back rapturously. The fingers of her left hand walk the easy distance between the bass notes while, on the right, they actually spell out a trill, a line, a slowly
unraveling melody. Her wrists arch slightly, delicately as shelifts and relocates them again and again. The gentle motion across the octaves belies the strength and commitment of her fingers as they spell out the Aria from Bach’s Goldberg
Variations from memory.
In a single, earth-shattering beat, it’s as if my world explodes, suddenly filled with the richest of sounds and the most vibrant of colors. Katherine Brenner has broken through a wall I hadn’t even realized I’d erected. When her
hands come to rest at the end of the Aria, she stops. As if sensing my gaze upon her, she opens her eyes to find me shocked and dazzled all at once.
I see the puzzlement in her eyes and she opens her mouth to speak, but I am sitting beside her on the bench before the words can slip free. Before I can stop myself from putting her face in my hands and drawing her lips to mine. She doesn’t fight me. Instead, her arms wrap under my arms and up my back to my shoulders, pulling my chest so close to hers that I can feel her heart beating underneath the white cotton shirt that she’s wearing. My shirt. She tastes soft and sweet, her mouth opening hungrily to mine. I hear a soft whimper from her and I pull back just enough to get a good look at her face. Her eyes are half closed, her lips cherry red and glistening from our contact.
“Do you…do you want me to stop?” I ask in a whisper.
She shakes her head. “No. Please, don’t,” she says, leaning forward to find my lips again. I don’t make her lean too far, pressing myself down to her while I reach behind and pull her closer.
Before I know what I’m doing, I’m on my feet and taking her with me. We’re stuck together in a tangled, stumbling embrace as we somehow move from one end of the large room to the other. I grunt when my hip hits the sharp edge of an end table, and her wayward elbow knocks over a book that’s balancing on the edge of a shelf.
“Oh, to hell with this,” I mutter, suddenly bending down and scooping her up in my arms, the same way that I did when I carried her in from her car. But this time she’s not fighting me.
This time, she throws her head back and kicks her feet in joy.

at August 09, 2018
Email ThisBlogThis!Share to TwitterShare to FacebookShare to Pinterest