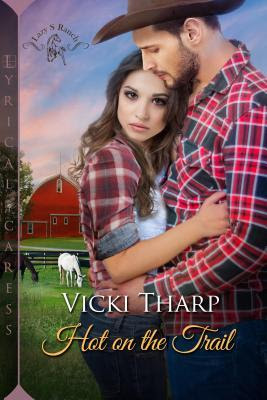 The stunning beauty and quiet majesty of the Wyoming wilderness can heal your soul. But one woman will discover that her heart is fair game . . .

The Lazy S Ranch is everything to Jenna Nash. It’s given her family, friends, and a fulfilling career: helping veterans rebuild their lives. She sacrificed a lot to get her equine therapy program off the ground—including love. But suddenly, she’s in danger of losing it all . . .

Joining the Marines was the best decision Quinn Powell ever made, even if he had to go it alone without Jenna. Now his best friend’s death has brought him back to the ranch he once called home—and to the woman who rejected him.

Quinn hasn’t lost his touch—with the wildest horses or with Jenna. Though she’s falling for the brash, impulsive cowboy all over again, Jenna has reason to be wary. But when she and the ranch are threatened, Quinn will put everything on the line to save them both . . .

Her thumb brushed across something on his palm. “Ouch! What the hell was that?” He snatched his hand back, probed the wound, and hit the end of a splinter, the tip barely sticking out.
She grabbed his hand and trapped it under her arm to steady it. “Hold still.”
“What are you going to do?” His pitch crept higher until it hit on mild panic.
“Pull out the splinter, you big baby.”
“Do it fast.”
She dinked around with his hand as if test-driving a Ginsu knife.
“Pull the damn thing out already.”
“I would if you’d stop squirming.”
“I’m not.”
“You are!” She shifted, tucking his arm tighter against her body, her breast mashed into his forearm.
He got still. She yanked. He hollered.
She held up the wood stake she’d removed from his palm.
“Jesus,” he said. “Save that puppy. We can use it if the ranch ever gets overrun with vampires.”
“It’s not even an inch long.”
“Why are women so bad at estimating length?”
“Why do men always exaggerate it? Splinters, fish, and um...” She raised her brows and bobbed her chin toward his crotch. “Other things.”
He gave her his cheesiest, cockiest grin. “Hey, darlin’, I don’t know what you’ve heard, but there’s no exaggeration where little Quinn is concerned.”
“Isn’t that nice. Not embarrassed to have a tiny winky.” She rolled her eyes, her words sticky-sweet with sarcasm.
Quinn barked out a laugh. “Winky? Seriously?”
Her face burned as red as an engine fresh out of oil. And her smile...his stomach dropped. What he wouldn’t give to be the man who brought that smile to her face every day.

The dust hasn’t settled on one woman’s past, but amid the breathtaking hills and valleys of Wyoming’s high country—and with the encouragement of one special man—her spirit won’t be broken . . .

Sydney Teller is as determined as the wild mustangs she was raised to train. Her reckless parents destroyed their reputation in the business—and hers, by association—yet Sydney knows she can prove herself if she’s just given a chance. That where the Lazy S Ranch and sexy Bryan “Boomer” Wilcox comes in . . .

Bryan risked life and limb on his tours in Iraq, and he knows damaged goods all too well when he sees them. Problem is, Sydney looks damn fine in a saddle and she’s got moves that can’t be learned. He doubted her at first, but now he wonders if they can navigate life’s obstacle course together—and indulge their own animal instincts . . .

Sydney can’t deny her attraction to Bryan, yet she’s wary of his demons. But when foul play threatens the ranch and their futures, Bryan gets a chance to rediscover the hero he’s been all along—and Sydney gets to show she’s got what it takes to tame the wildest impulses—in both man and beast . . . 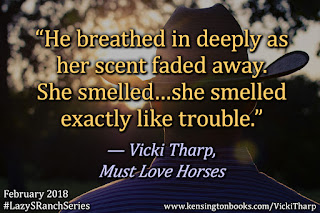 He turned as he replaced the flask. Sidney stood two feet away with an expression he couldn’t read—he didn’t know her well enough. Had she seen him take a drink? He thumbed a wintergreen Lifesaver from his front pocket and slipped it into his mouth. He stifled the shudder. Lifesavers after whiskey. He’d almost rather lick a horny toad.
She held her hand out to him, not saying a word, but watching him the way his mother used to when she was waiting to catch him in a lie. He thumbed another mint from the roll and plopped it into her hand. If he was going to pretend innocence, he was going full monty, as his Brit brothers-in-arms back in Fallujah used to say.
She plopped the mint into her mouth and he turned back to the truck.
“Not so fast.” She had her hand held out again, one eyebrow raised.
If she wanted a sip from his flask, she was out of luck. That thing wasn’t big enough to even last him the day. He reached into his front pocket and plunked the half-eaten roll of candy onto her palm.
She slipped them into her pocket and cleared her throat. Loudly. “Keys.”
She wasn’t asking.
He turned away. The whiskey had made the ants go away, but one swallow wasn’t nearly enough to dull his irritation with her. “I can drive with the prosthetic.”
“It isn’t the prosthetic I’m worried about.” She reached out, slid her hand into his jacket, pulled out the flask, and tossed it into the bed of the truck.
“What the hell?”
“Keys.” Her tone flatlined.
“I’m not drunk.”
“Didn’t say you were.”
“For the sake of argument, let’s say I prefer to drive.” Still the hand. Outstretched. The fingertips wiggling in a give-it-here gesture.
“One swig—”
“Keys.” She stepped into his personal space. “Or I’ll—”
“Or you’ll what?” He fought the grin that wanted to take over his face. Her green eyes flashed somehow cold and hot at the same time. But damn, it was hard to take her seriously when she barely came up to his chest. “You going to tell my mommy on me? Or Mac?”
“I’m not five years old. I don’t tattle on the other kids on the playground.”
“Then what’ll you do?”
She glanced down at his crotch pointedly. “I’ll take the keys myself.”
He laughed aloud at that. “I’d like to see you tr—”
As the words left his lips, he knew he was in deep, deep shit. He’d forgotten he had his regular leg on—it fit in the cowboy boot, but didn’t have the spring effect the blade had. The effect that transferred his energy to the ground. The effect that gave him power. The effect that gave him speed.
The effect that prevented him from having his nuts kicked up into the back of his throat.
She was quick. Little-fairy-all-hopped-up-on-pixie-dust quick.
His hand came down to block.
He closed his eyes and braced for impact.
The blow never came.
He peaked out between his eyelids. What had he expected to see? That she’d up and disappeared? Isn’t that what fairies did? But she was in front of him, one leg raised like the karate kid with her pointy-toe boot kissing distance from the boys.
He grunted with relief. Whiskey never tasted good when it came back up. He swallowed. “For such a little thing, you sure are violent.”
“When I have to be.”
He unclenched his jaws and a slow smile spread across his face as he reached into his pocket for the keys. “Do you usually pull your punches?”
“No,” she said. “But I also don’t take advantage of the handicapped.”
His hand stopped above hers. The tips of his ears heated. He didn’t feel handicapped. He wasn’t handicapped. In fact, he’d worked his ever-loving ass off in physical therapy to regain his mobility. He still worked out hard. Every. Single. Day.
“Don’t vapor lock on me now.” She snagged the keys from his fingers before he could change his mind. “I didn’t mean the leg, Einstein. I meant the booze.”

at August 30, 2018
Email ThisBlogThis!Share to TwitterShare to FacebookShare to Pinterest