HERE TOMORROW 7 PM PST. CHRISTINA HOVLAND AUTHOR OF: GOING DOWN ON ONE KNEE 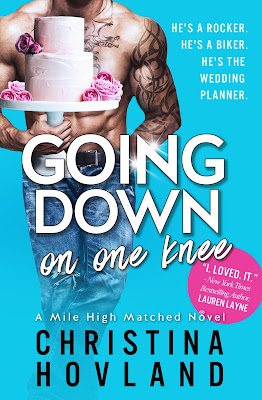 Going Down on One Knee:
Number-crunching Velma Johnson's perfectly planned life is right on course.

That's a lie. Sure, she's got the lucrative job. She's got the posh apartment. But her sister nabbed Velma's, Mr. Right. There has to be a man out there for Velma. Hopefully, one who's hunky wears pressed suits and has a diversified financial portfolio. He'll be exactly like, well... her sister's new fiancé.

Badass biker Brek Montgomery blazes a trail across the country, managing Dimefront, one of the biggest rock bands of his generation. With the band on hiatus, Brek rolls into Denver to pay a quick visit to his family and friends. But when Brek's sister suddenly gets put on bed rest, she convinces Brek to take over her wedding planning business for the duration of her pregnancy.

Staying in Denver and dealing with bridezillas was not what Brek had in mind when he passed through town, but there is one particular maid-of-honor who might make his stay worthwhile.

Velma finds herself strangely attracted to the man planning her sister's wedding. Problem is, he ticks none of the boxes on her well-crafted list. Brek is rough around the edges, he cusses and doesn't even have a 401(k). But trying something crazy might get her out of the rut of her dating life--so long as she lays down boundaries up front and sticks to her plan... 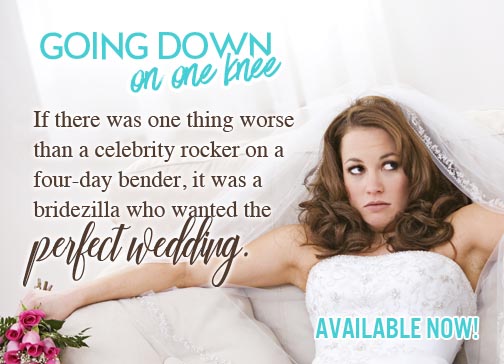 “What the heck happened to those?” Velma stared at the mess of gold-foiled cardstock he’d tied pink ribbons around earlier. Tried to tie ribbons around. His hands weren’t exactly made for ribbon tying. He’d come up with a sticker system that seemed to work okay. Forget about the tissue-paper envelopes they were supposed to slide into before the mailing envelopes. Who the hell needed two envelopes? Especially with thin-ass paper that wrinkled whenever he breathed?
Her eyebrows fell together. “Are these Claire’s? They’re all crumpled.”
So maybe a couple had suffered collateral damage while he figured shit out.
Velma bit at her bottom lip. “Let me help.”
“Thought you’d never ask.” He sauntered to the couch and flipped on the television. “And the show’s good. Way better than that crap you put on with dudes singing about their feelings.”
“Musicals are cultured.” Frilly blanket over her lap, she made herself comfortable on the other side of the white leather sofa.
“Eh.” Brek brought up the next episode. The start of the third season. “This, this is good stuff.”
Stack of invitations in hand, she tied the silk around one without any issue.
The damn paper didn’t crumple at all. “How’d you do that?”
She held up the invitation in illustration. “It’s easy. You make a bunny ear, go over, go under, around, and through. See?”
Fuckin’ serious? “I know how to tie my shoes, V. How’d you do it so easy? Around the card?”
“Luck?” Apparently, it was no big deal to her.
“You’re in charge of ribbons. I’ll put on the stamps.”
“You’re not using the Love stamps?” She nodded to the stack of American flag stamps he’d picked up earlier.
“What the fuck are Love stamps?”
“They’re the stamps with hearts and they usually have ‘love’ written on them. They coordinate better. I’m pretty sure that’s what Claire wants.”
The stamps he’d grabbed had Old Glory blowing in the wind. Fuck. Aspen’s notes said nothing about special stamp
s.
“A stamp’s a stamp.” He stuck a stamp on the corner of an envelope. “They’re patriotic.”
Velma didn’t look convinced.
“You might want to make that a little straight
“Yours was crooked.”
r.” Velma reached for the stamp and peeled it off, repositioning it exactly where he’d put it before.
“That’s how I had it.”

Rock Hard Cowboy (A prequel to Going Down on One Knee—part of the Christmas with a Colorado Cowboy Boxed Set.)

A super couple for Christmas.

Rock 'n' roll cowboy Tucker McKay’s muse has left the building. Returning to his roots at his Colorado ranch might be the inspiration he needs, and he’s done everything he can to ensure his reputation shines for his eventual return to the public eye, should his muse show up again. Ready to leave town, he’s not prepared for the paparazzi frenzy after a starlet falls face down on his lap at L.A.’s trendiest new nightclub.

America’s Sweetheart, Mackenzie Bennett’s career is on the rocks after a few lackluster movies damaged her studio appeal. She needs something to change, and fast. What she does not need is the firestorm that ensues after an ill-fated spill is caught on camera. Spending Christmas in Colorado with the man she publicly embarrassed is her only option to turn around the bad press.

While a fake relationship might drum up the publicity needed to save both of their careers, a small-town family Christmas may be just what they both need to figure out what truly matters… 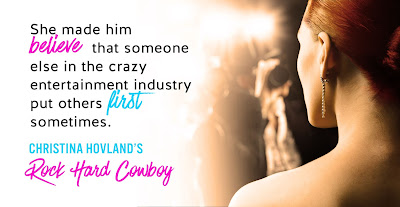 The nearly transparent dress Kenzie’s stylist had outfitted her in made hustling anywhere practically impossible. The heels didn’t help. So she took her time sauntering across the VIP section. Her bodyguard shadowed her movements. He was behind her, but she knew he was there. He was always there when she did these appearances.
“Tucker?” she asked, approaching his table.
His gaze lifted to hers. It softened for a split second. “Hey.”
“I came by to say hello.” She fidgeted with her glass. Which was unacceptable. She set it on the table and nudged it from the edge with her finger.
“Have a seat.” He gestured to the other side of the booth. The guy sitting there scooted over to make room for her.
She didn’t sit.
“I was thinking we could chat alone, about some of the things you mentioned to a reporter about my movie.”
“Oh. That.” He ran a hand over his neck. The movement made the defined muscles of his triceps bunch.
Dammit. She wasn’t over here to check out his arms.
“Have your people call his people,” one of his people said.
Kenzie leaned toward Tucker, ignoring his entourage. “I’d really like a conversation.”
“Look.” His eyes were soft again. He gave a nearly imperceptible shake of his head. “Magazines print what magazines print.”
She took a deep breath.
“I just think—” Someone—a bulky someone—bumped her from behind.
The stilettos wobbled, her balance precarious. She threw her arm wide to catch herself. It didn’t work.
Her knees buckled.
Damn. This was going to hurt.
She fell forward.
“Shit.” Tucker moved to grab her.
Too late. The momentum caught her.
And that’s how, two weeks before Christmas, she found herself face-first in Tucker McKay’s crotch.

Christmas with a Colorado Cowboy

INCLUDED NOW IN A BOX SET

at November 01, 2018
Email ThisBlogThis!Share to TwitterShare to FacebookShare to Pinterest