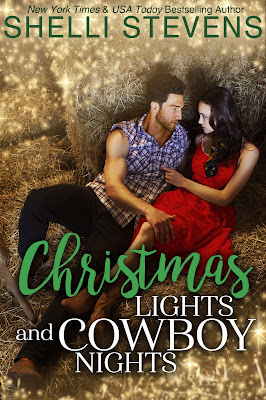 Rosa Mercado is looking for something more serious with her love life, which is why she hits the brakes on the sexy cowboy who walks into her dad’s restaurant and hits on her.
Calvin Marshall had Rosa lined up in his sights to be his next conquest. Until she makes it clear she’s looking for Mr. Right, not Mr. Right Now. Commitment isn’t exactly his favorite word.
But when they’re forced to stay at Misty Meadows Ranch together over Christmas, it becomes clear that there’s more at stake than just one of them inheriting the ranch by New Year’s Eve. The magic of the season will blur the line between love and hate, and challenge everything they both thought they wanted.

He eased his thumb through the belt loop in his jeans and offered a slow smile. “Say, what do you do for fun, Rosa?”
Her eyes narrowed. “No.”
He paused, confused for a moment. “What do you mean by no?”
“I mean no, I’m not interested. You’ve got womanizer written all over you.”
Cal’s smile faltered. He couldn’t have been more stunned if she’d punched him the face. “Womanizer?”
“You know. Skirt chaser. Player. Philan—”
“I get it.” He glowered and struggled to remember if he’d ever in his life been called any one of those things.
“It’s just the first time someone’s ever called me one.”
She gave a small shrug and crinkled her nose. “To your face.”
Oh, all the…
“Well,” he fumbled for a response. “That’s pretty rude.”
“I don’t have to be polite anymore, Cal, I’m off the clock.” Her lips curved up into a saccharine smile.
“I tipped you damn good,” he sputtered.
“And I thank you for it.” She paused. “Did you have the flu?”
Confusion had him shaking his head.
“That woman who dumped chips on you said you told her you had the flu.”
Well hell. His guilty expression must’ve said it all.
“That’s what I thought.” She turned to her car.
Irritation rose in his throat and the blood in his veins heated. “You sure are quick to judge someone you barely know.”
“Your reputation precedes you in this town, Cal.” She paused and turned back to him, approaching slowly.
“And even if it didn’t, do you want to know what I do for a living? When I’m not helping out at my father’s restaurant?”
“Sure.” If it kept her here talking to him.
The closer she got, the quicker his heart pounded. He was both irritated with her, and resoundingly attracted to her.
God, she was beautiful. Her eyes bright with energy and femininity. His tongue grew so thick in his mouth, he wasn’t sure he’d be able to utter another word. He was twelve again when he’d discovered girls weren’t gross and figured himself head over boots in love with the receptionist at the dentist.
“I’m an insurance agent, Cal.” She paused and swept her gaze over him. “And it only took me a few minutes to know you’re not worth the risk.

With his competing days behind him, Wyatt Marshall has settled into ranching life in Marietta, Montana. But with the Copper Mountain Rodeo, his only exception, just around the corner, the last thing he needs is a distraction – especially one in the form of a pretty, yet vaguely familiar country singer.
For Claire Miller, it’s been almost a year since she fled Las Vegas with only her purse and the clothes on her back, and she’s been laying low in Montana with a new image. When she and her country band travel to perform in the small town of Marietta, she doesn’t plan on getting stranded there for several days. Or for an innocent offer to stay at a nearby ranch to turn out to be more than she bargained for: she recognizes its owner to be the same sexy cowboy she got hot and heavy with – then stood up – in Vegas.
With the passion flaring between them and Wyatt getting closer to putting the pieces together, Claire is ready to run again, not knowing the danger that sent her fleeing in the first place is close on her heels.

Shelli is a New York Times and USA Today Bestselling Author who read her first romance novel when she snatched it off her mother’s bookshelf at the age of eleven. One taste and she was forever hooked. It wasn’t until many years later that she decided to pursue writing stories of her own. By then she acknowledged the voices in her head didn’t make her crazy, they made her a writer.
Shelli is a true pluviophile (lover of rain) and currently lives in the Pacific Northwest with her husband and two daughters. She writes various genres of romance but is most known for her contemporary series such as The Marshall Ranch, The McLaughlins, and A is for Alpha. She’s a compulsive volunteer and has been known to spontaneously burst into song.

at December 12, 2018
Email ThisBlogThis!Share to TwitterShare to FacebookShare to Pinterest