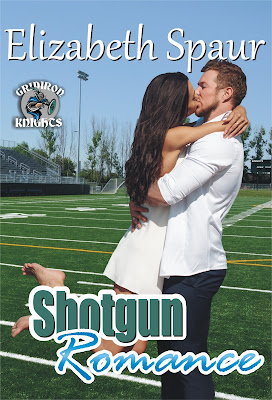 He had no faith in love. She had no faith in men. They’ve got nine months to find faith in each other.
Since the night his life had taken a dramatic left turn, Nick Jacobs had been searching for a chance to prove he was the man he’d always wanted to be. When his old friend calls him and offers him a chance to help rebuild the Cormac University football program, he thinks this is his shot. He didn’t count on falling for Olivia or getting her pregnant. Can he juggle all his responsibilities and prove to himself, once and for all, that he’s worthy of love?
After the traumatic loss of her mother, Olivia Valenti shut herself off from the world. Running the Cormac University English department is a dream come true. She didn’t think she would ever want or need anything else. One night with Nick in Las Vegas and motherhood is on the horizon. Can she open her heart to Nick and build the home she never knew she dreamed of?
An instant attraction and a night of celebration leads to an unexpected pregnancy, which Nick and Olivia are determined to face together. Unfortunately, their pasts and present are about to collide, and old secrets will challenge the foundation they’re trying to build their family on. Can they learn to let go of the past in time to share a future?
Will they realize that love always wins?
Welcome to Shotgun Romance, the second book in the Gridiron Knights series set in King’s Folly, South Carolina, where football is king, and the locals have something to say about everything. When you come for a visit, you’ll never want to leave.


This is a stand-alone romance. It can be read and enjoyed on its own. If it’s your first taste of the Gridiron Knights, check out Second Chance Option and find out how Tess and Cade found their happily-ever-after.

It is a truth universally acknowledged that English professors should not drink tequila. It was the devil.
The bright Las Vegas sunlight filled the room and shot through Olivia Valenti’s brain causing an ache to roll through her entire body. She inched her hand to the side, hoping to find a pillow. Once she had it in her grasp, she would decide whether to cover her eyes or suffocate herself with it.
Instead of sliding on to one of the downy soft pillows that only seemed to exist in high-end hotels, her hand met flesh. Rock. Hard. Flesh. Her hand splayed on a set of taut abs that clenched underneath her wandering fingers. Warmth seemed to jump from the unfamiliar skin to her palm and up her arm.
She heard a rumble come from the warm body next to her and held her breath as she ran through the events of the night before in her mind. It might hurt to think, but she needed to get her act together.
Her friends Tess and Cade had gotten married last night. Their friends and family had joined them for the ceremony and reception at the Mandalay Bay. The hotel was across Las Vegas Boulevard from the American Ninja Warrior course, where Tess became the first woman to finish stage three.
They’d celebrated Tess’s accomplishment and her wedding to Cade the night before with amazing food and lots of booze. Olivia hadn’t gotten drunk. Her blessing was that alcohol didn’t affect her judgment or behavior. Her curse was that it did give her a hangover like she’d had enough to drink to fell an entire football team.
Olivia huffed out a breath.
Oh, right.
Tequila shots, arguing Star Trek and Star Wars with Tess’s brothers, and him. Nick Jacobs. The man who’d starred in every one of her fantasies since she’d met him three months ago.
He’d led her out on the dance floor last night and held her there for the rest of the night. A willing prisoner.
After the bride and groom had taken off, the party had split into gamblers, partiers and Nick and Olivia, who’d ended up kissing on the elevator and all the way up to his room.
In all her wildest fantasies, she’d never imagined she would actually end up here with him or that some of the things they’d done last night were biologically possible.
Oh my God, I had sex with Nick Jacobs.
She was torn between the squeals of delight coming from excited Olivia and the shrieks of fear from terrified Olivia.
Was he awake? Olivia opened her eyes and let them adjust to the bright lights before they focused on the man next to her in bed. His face was turned toward her and relaxed in sleep. She missed his beautiful blue eyes.
Olivia took the edge of the sheet and lifted it carefully with her thumb and forefinger and glanced down. The bright light shone through the sheer cotton. Even with the memories of last night roaring through her mind, she couldn’t process what she was seeing.
She was naked. He was naked. They were naked. She was naked in bed with Nick Jacobs. Naked from Old English nacod; akin to Old High German nackot naked, Latin nudus, Greek gymnos. At the sound of his snort, she dropped the sheet and turned her gaze to his face. He was still asleep.
Thank God.
The question now was, what would Beatrice do? As a Shakespearean professor, she often tried to think about what some of her favorite heroines would do in delicate situations.
Olivia had never been in a more delicate situation than waking up in a room with a naked man after a night of amazing sex. Wasn’t there a protocol for one-night stands? This couldn’t be anything else, could it? After all, he was Nick and she was…well…Olivia.

He was looking for a fresh start. She was looking for a new path. Love is what happens when they least expect it.
At loose ends after a medical discharge from the Navy, a call from Cade Maguire’s college coach gives him a new objective. Help save his alma mater’s football program. A gut-wrenching betrayal drove him from the game once. Can he finally stop running long enough to let go of the past and find his future?
Veterinarian and genius Tess Gallagher has an abiding love for home and family. She’s spent her life taking care of everyone else. Doing what was right always came before doing what she wanted. When her younger brothers enter her in the American Ninja Warrior competition, can she finally stop hiding her true self from the world?
Sparks ignite between Tess and Cade when she saves his injured dog and love is on the horizon when Cade’s new job is put in jeopardy before it even begins. Will Cade realizes Tess is the second chance he really wants? Will Tess realize that Cade has always seen her for who she truly is?
Will they both realize that love is the only option that matters?

Welcome to Second Chance Option, the first book in the Gridiron Knights series. Football is king in King’s Folly, South Carolina and the locals have something to say about everything. When you come for a visit, you’ll never want to leave.

When her physics teacher gave her detention for reading a romance novel during class, Elizabeth Spaur knew she was destined to be a romance writer. Her journey from physics class to published author has gone from coast to coast and led her through multiple industries, including film and television, banking and the law. Every step along the way has enriched her life and helped her tell stories that always come with a happily ever after and, usually, a side of snark. Elizabeth writes contemporary, historical and paranormal romance. She lives with the love of her life and two pairs of cats and dogs, all of whom are named after television crime fighters.

She enjoys hearing from her readers at

at January 16, 2019
Email ThisBlogThis!Share to TwitterShare to FacebookShare to Pinterest