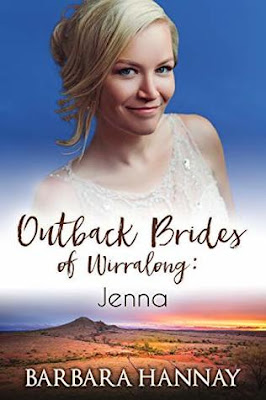 Rad-Reader:  How did the whole Outback Brides series start?

Barbara:  I wasn't involved in the first series. When one of the authors was unable to write for the second series, I was invited to step in.

Rad-Reader:  How many books are there now to the series?

Barbara:  Four books in each of Series 1 and 2.

Rad-Reader:  Do you have to read each of the books to keep up with the series or does each book stand up alone since each book is written by a different author?

Barbara:  The books stand alone. However, there are mentions of characters from the other stories and many readers enjoy reading all of them.

Rad-Reader:  How do all the authors keep track of what is going on so not to cross over into someone else’s storyline?

Barbara:  We have a “bible” of basic info about our characters, plots and about Wirralong. We keep in touch via email and can ask each other questions. The editor also picks up the occasional overlap.

Rad-Reader:  Why exactly is Jenna such a workaholic?  Is it because it keeps the noise in her head about her past at bay?

Barbara:  Absolutely. Thank you. I couldn't have put it better. Also, I think it's about proving her self-worth and that becomes less necessary after she meets Sam.

Rad-Reader:  There seems to be an instant connection that seems to happen when Jenna and Sam see one another making eye contact.  What do you think that is?  Neither wants a connection, so what?

Barbara:  I put it down to chemistry. Even though Jenna and Sam aren't looking for serious relationships, they are just so right for each other, they can't ignore the attraction.

Rad-Reader:  Sam seems to know a lot about how to farm and the drought.  Was that taught to him by his father, self-taught, or from college?

Barbara:  A combination of all of these.

Rad-Reader:  Jenna keeps her secret close to the vest.  Won’t there be a time where she just breaks?

Barbara:  Yes. The story situation exposes her vulnerability. Just lucky Sam is there to catch her.

Rad-Reader:  When Sam was served with the writ he was pissed.  Did he really not think once served that the mining company would not come after him?

Barbara:  Perhaps. But he's an alpha male and he believed he had right and justice on his side.

Rad-Reader:  Jenna and Sam were both climbing on for the ride but remind of needing to help the district.  Who oversees their own lives and love lives?  But the pool from a one night stand too so much more can it be real?

Barbara:  As I see it, they are both confident that they can keep their relationship at fling status. But as Jenna becomes more involved in helping Sam and the townsfolk of Wirralong with their legal battles, she and Sam get to know each other better, to care for and respect each other and ….

Rad-Reader:  Jenna and Sam both have feelings for one another but neither really wants to live where the other lives.  Who do you think would have the hardest adjustment if they were to move?

Barbara:  It would be very hard for a sheep farmer to find another job in the city.

Rad-Reader:  Jenna keeps wanting Sam.  Yet, giving mixed signals is that even fair to Sam?

Barbara:  This is a romance. There's attraction and there's an internal conflict. Sexual tension is never fair. :)

Rad-Reader:  Of course, Jenna took Sam to a place where she went with friends and work colleagues, why?  People she worked with, a showy place when Sam would have been happy with a greasy burger, why?  Didn’t she have an inkling she would run into people; she knew?

Barbara:  Perhaps. She probably didn't think it would be a problem though.

Rad-Reader:  How many books a year do you write?

Barbara:  Two – one shorter book like Jenna and a 100K book for Penguin Australia.

Rad-Reader:  How long did it take you to get your first book published?  Did you do it the traditional way or self publish?

Barbara:   I submitted to a traditional publisher for four and a half years before my first manuscript was accepted. As yet, I haven't self-published anything, but I've had over fifty books published traditionally.

Rad-Reader:  What is your favorite genre to read in

Barbara:  Women's fiction with a touch of romance.

Rad-Reader:  How do you keep your focus when like can get in the way of writing time or do you have a set schedule?

Barbara:  A deadline is a useful way to keep you focused. Most days I try to write a thousand words.

Rad-Reader:  Do you use a storyboard or something like Pinterest to help with your story set up?

Barbara:  Most times I create a collage of images – characters and setting and anything that prompts my imagination.

Rad-Reader:  How do you go about finding your ideas for your stories or do you just sit down and let it flow?

Barbara:  I'm very lucky that my husband is also a writer and I often bounce ideas off him. I also have a good writing mate who's a great asset on the other end of the phone or email.

Barbara:  Meet Me in Venice will be released on August 6th.

Barbara:  I don't have access to American online stores, but the links my publisher provided for Jenna is all available here: 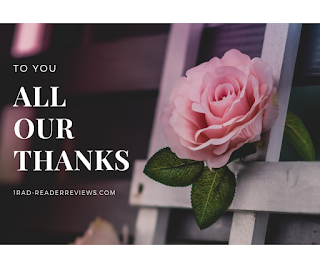 Barbara,
Thanks so very much for being with us.  It was a pleasure having you as a guest author.  You were so easy to work with and it was a joy to read your book.   Australia sounds like a wonderful place for adventures of all kinds but especially the heart.
Char

at June 21, 2019
Email ThisBlogThis!Share to TwitterShare to FacebookShare to Pinterest