SHOUT OUT: AN AUTHOR’S PLACE WELCOME TRACIE BANISTER AUTHOR OF: IN THE SWIM OF THINGS (SEE EXCERPT) 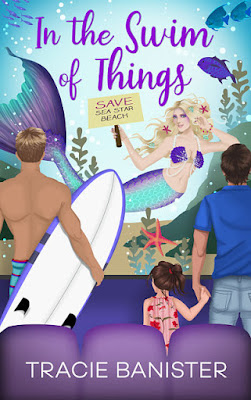 A sexy, sun-soaked tale about a tail-wearing girl who makes a lot of waves—perfect for fans of Lauren Layne, Meghan Quinn, and Christina Lauren.

Ocean-loving Kyra Goodwin had to give up her dream of becoming the female Jacques Cousteau in order to take care of her father and brother, but being a mermaid at the Cape Cod Aquarium is pretty fintastic as far as alternative careers go.

Of course, life as a half-fish/half-woman isn’t all sunken treasure and Ariel twirls. Kyra has to deal with perpetually pruney fingers, eyes irritated by saltwater, and bratty kids on the daily, plus her glam alter ego can make dating really weird. (So many men have pervy siren-of-the-sea fantasies!) When she meets hunky surfer Cade, and he’s into her without knowing what she does for a living, Kyra thinks she’s finally won the romance lottery.

Unfortunately, Kyra’s plans for a carefree summer of catching waves with her new boyfriend run aground when Sea Star Beach, a place that holds great sentimental value for her is taken over by a big-city developer who wants to build an exclusive resort. Kyra’s crusade to save her beloved beach threatens both her job and her relationship with Cade as does her growing closeness with her irresistibly broody merwrangler, Declan, whose precocious daughter is intent on playing matchmaker.

When a new family drama arises just as Kyra receives an offer that would turn her greatest desire into reality, she’s torn. Will she do what’s expected of her, or dive in and follow her heart? 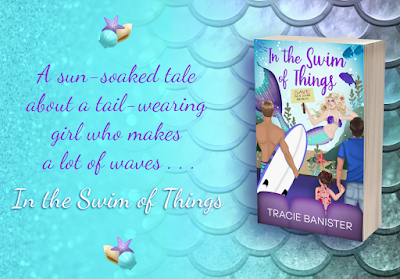 “Say mermaid!” I tell the polka dot dress-wearing child sitting next to me on the rock base of my throne.
“Mermaid!” She flashes a partially toothless grin at the digital camera being held by the aquarium’s resident photographer, Becky.
“Great job!” My arm’s wrapped around her slight shoulders, so I give her a squeeze. “Now, go pick out a prize from my treasure chest. You can have whatever tickles your fancy!”
There’s a terrific selection of goodies in that chest, including colorful, beaded necklaces and bracelets, hand mirrors encrusted with faux jewels and shells, glittery starfish hairpins like the ones I wear, and gold doubloons made of milk chocolate. I help the girl down from her perch and wish her luck on the shallow water swim test she told me she’d be taking at her clubhouse’s pool the following week.
“Just imagine you’re part fish like I am!” I encourage her, and she smiles.
“And what’s your name?” I cheerfully ask the next child who plops down on the throne.
Instead of answering, she asserts, “Kyra’s a dumb name. Did you make it up?”
It looks like someone’s parents neglected to teach them manners. Alas, it’s not my place to school the little brat, so I’ll have to grin and bear it.
“I’m not that clever! My parents picked the name because it means light in Latin, and I had gold hair when I was born. Still do.” I flip some of the long, honey-colored strands over my shoulder.
“Your hair looks fake. I bet it’s extensions like my mom wears.” Grabbing a chunk of my hair, she yanks on it hard.
“Ow!” I yelp because it felt like she pulled the hair out by its roots. And I thought having a cupcake dropped frosting side down on my tail earlier was going to be the low point of this day!
“That was not nice,” I say sternly. “Where is your mother?” There’s a group of teenagers still waiting in line, but I don’t see any adults in the immediate area.
The bad seed shrugs. “Talking to some man. She’s always trying to find me a new daddy.
I’ve had three so far.”
Well, shoot, now I feel sorry for her. The poor kid might not be naughty by nature. Sounds like she doesn’t have any good role models in her life, so she’s probably acting out because she needs some attention. Wait a second, did she say that her mother was on the prowl and had her hooks into a man in this room? The only guys here are too young, gay, or . . .
My eyes dart over to the snacks table since that’s where Cade was swarmed earlier. He’s not there, but I see Declan tossing a piece of salt water taffy into his mouth while listening to something being said by a fellow blue shirt (that’s what most of the aquarium staff members wear). He’s safe then . . . not that his virtue is any concern of mine. My merwrangler is single and free to do whatever he wants with his private parts. I would just think that after his bad experience with Callie, he’d be wary of getting involved with someone who wasn’t—
Whatever. Declan’s not my problem. Cade, on the other hand . . . oh, there he is! Over by the merch table.
Aw, how cute, he bought and is now wearing one of the tees that says, “I met a mermaid at Cape Cod Aquarium . . .” on the front, and “. . . and it was fintastic!” on the back. Unfortunately, he’s not alone. A thirtysomething blonde wearing a very short denim mini skirt and halter top (hair-puller’s mom no doubt) is all up in his personal space, and she’s pawing at his chest with her neon yellow claws! What makes her think that’s okay? This is a family venue, not some dive bar where people are looking to hook up and it’s too dark to see where everyone’s putting their hands. Grrrrrrr.
Cade needs to tell her to back the hell off, but of course he won’t. He’ll humor her like he does all the other women of dubious morals who get too friendly with him. Ugh! Guess it’s up to me to put a stop to her fun.
I take a picture with the sour-faced child, then turn to her and query, “How’d you like to do
your new mermaid friend a favor?”
“What’s in it for me?” she wonders.
“You can have two treasures from my chest, which has all sorts of fun goodies.”
There’s a disturbingly shrewd look in her dark eyes when she replies, “Three treasures.”
I can’t believe I’m being shaken down by someone who’s still in elementary school!
“Fine. You can have three, but then you have to march straight over to your mother and tell the man she’s talking to that it’s time for his photo op with the mermaid. You got that?”
“I think I can handle it,” she snarks with a roll of her eyes.
Yikes! If she has this much ‘tude now, what’s she going to be like when she hits puberty?

An avid reader and writer, Tracie Banister has been scribbling stories since she was a child, most of them featuring feisty heroines with complicated love lives like her favorite fictional protagonist Scarlett O'Hara. Her work was first seen on the stage of her elementary school, where her 4th-grade class performed an original holiday play she penned. (Like all good divas-in-the-making, she also starred in and tried to direct the production.)


Tracie’s dreams of authorial success were put on the backburner when she reached adulthood and discovered that she needed a "real" job in order to pay her bills. Her career as a personal assistant to a local entrepreneur lasted for 12 years. When it ended, she decided to follow her bliss and dedicate herself to writing full-time. She is the proud winner of the 2017 Independent Press Award (Romantic Comedy) and a Bronze Medal in the 2017 Readers’ Favorite Awards
(Chick Lit).
In the Swim of Things is Tracie’s sixth novel and thanks to this book, she can now check another occupation off her fantasy list. She has no doubt that writing about a mermaid is much easier than actually being one!

at June 29, 2019
Email ThisBlogThis!Share to TwitterShare to FacebookShare to Pinterest