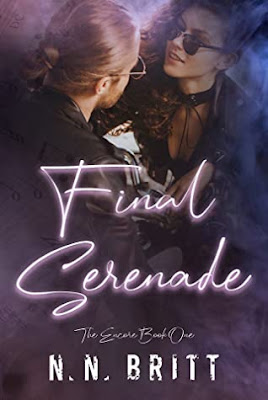 A secret affair with your teenage celebrity crush? Yes, please!

Music journalist Cassy Evans believes her career is made when she snags an exclusive interview with rock singer Frankie Blade.

Once a superstar of the generation, Frankie has been a recluse since a freak motorcycle incident sent his career into a tailspin seven years ago. Now that he’s returned to claim back his crown, Cassy hopes to kill two birds with one stone—secure her magazine a top spot in the rankings and meet with the man of her adolescent dreams.

A dinner invitation isn’t what she expects to get out of this interview, but the chemistry between them is undeniable.

With paparazzi watching Frankie’s every move as the two jumps into a stormy relationship, Cassy risks her career and her privacy—and possibly her heart—to be with the biggest Rockstar on the planet. But is Frankie worth it? Is he the humble man she thinks he is or is he just that good at hiding his demons?

Final Serenade is the first book in “The Encore Series”. Cassy and Frankie’s story concludes in One Last Verse. 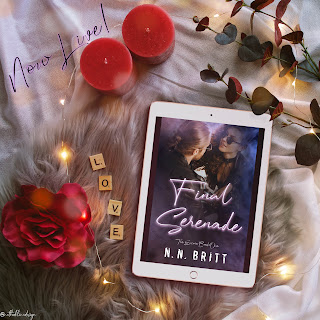 “Could you put this on?” I handed him the lav mic.

“Does it come with instructions?” A hint of a smirk tugged the corner of his mouth. The man was full of silent innuendos. I wasn’t sure if they were intentional or force of habit, but I loved it.

Frankie’s hands didn’t move. He tilted his head slightly, then glanced down at his chest. The man had either never secured a microphone on his clothes before or was too lazy to do it himself. Although the latter made more sense since microphones were sort of his specialty.

“Okay, ummm”—I kept smiling as my hands reached for his shirt—“do you have a preference of which side you want it on?” Was there anything about touching Frankie in the confidentiality agreement? My mind drew a blank and I got slightly paranoid. The man’s worth was seventy million dollars, and if my memory served me right, his vocal cords and his entire body were insured for double that amount.”

Promises will be broken. Love will be tested.

Cassy Evans knows a thing or two about secrets. By juggling work and a hidden relationship with the world’s biggest rock star for months, she’s become an expert.

However, being with Frank comes at a price. Seven years after the accident that almost ended everything, his trauma still haunts him. Determined to get back on stage, the man known to the world as Frankie Blade would do anything to ensure the success of his band’s reunion. But when one rash decision puts his entire career on the line, it’s not clear if he can recover from it.

As Frank spirals out of control, pushing Cassy away, she has to face the reality of what they’ve become. He’s harder to love than she imagined. Her common sense tells her severing all ties with him is the right choice.

Problem is, she can’t leave without her heart. And Frank doesn’t want to give it back.

One Last Verse is the conclusion of Frankie and Cassy’s story. It should be read after Final Serenade. 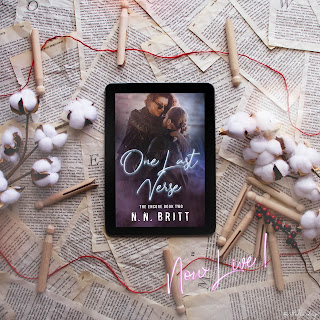 “What’s going on?” I asked, stepping out of the car.

“Hey, short stuff. How are you doing?” Dante hollered from the chair. His right leg was swung over his left one and he was mouth-torturing a cigarette.

“Do you need a knife?” I gritted my teeth and began my approach.

“A knife?” He quirked his dark brow.

“Last time I checked, cigarettes weren’t cutting it if you planned on stabbing someone in the back.” I stopped at the bottom of the stairs and matched his hard stare.

He blinked at me a few times, then laughed. His laughter was rough and deep. Smoke puffs floated from his mouth and nose. “You’ve got some dark humor, darlin’.”

He pulled the cigarette from between his lips and brought his body forward. For someone who smoked so much, Dante had awfully perfect teeth. White, shiny, and even. I wondered if they were real. I wondered if anything about him was real.

“Well, what can I say? Life taught me all my jokes.” I couldn’t read his expression. He was every bit the mess he should have been. Eyes bloodshot, cheeks sunken, hair tousled. Only, he wore his vices proudly. He didn’t hide any of his bad habits, be it cigarettes or drug addiction. He didn’t look high to me right now, but I couldn’t think of any other somewhat logical explanation behind his visit.

“Frankie-boy isn’t letting me inside.” Dante motioned at Roman. “I want to talk to him. Can you get your man to come out?”

“I wasn’t sure if you were on something.” I hopped up the stairs and stopped in front of the door. “But I am now.”

N.N. Britt is a Los Angeles-based music journalist and photographer. Her photos have graced t-shirts, billboards, and CD covers. She pens realistic, thought-provoking novels about today's world of art and music and the flawed people who live in it. When she's not writing or drinking coffee, she's probably reading or attending a heavy metal show.

All questions can be emailed at