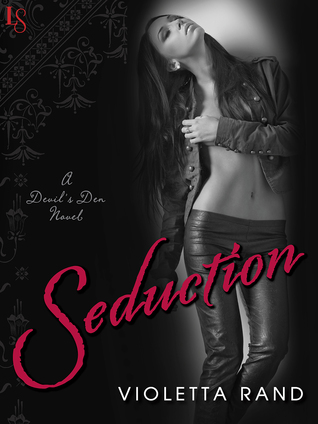 Seduction returns to the Devil’s Den, a Texas strip club where hearts can’t hide when the chemistry is right.
The night Marisela Gonzalez rides up to the Devil’s Den on her motorcycle, running from trouble and looking for her sister, she finds more than a place to hide out and work her red-hot body. She meets a guy brave enough to stand by a tough, terrified nineteen-year-old girl who’s been in the wrong place with the wrong jerk one too many times. And he’s ready to show Marisela how a real man treats the woman he desires.An ex-cop taking over as the club’s head of security, Craig Hanson can handle anything—except the urgent need he suddenly feels to hold Marisela tight. Commitment has never been his thing, but all that changes when Craig finds something too real to deny between them. Sensual and vulnerable, Marisela’s got a scary past. And when it comes knocking, Craig goes all in to protect her—because seduction is the ultimate game changer.Includes a special message from the editor, as well as an excerpt from another Loveswept title.

HUBBY'S REVIEW:
Marisela Gonzalez, rides a Ducati and is looking for her sister. She rides up to a club and a fight breaks out and she hits a guy over the head with a bottle. Turns out the is from a gang called the Banditos and then she runs into a guy from the past named Craig. He is surprised at the way she looks and for the bike she riding, but is also attracted to her and does not know why? She being 19 but she does not look that age. After he takes her to her sisters and husbands house he finds out more of her story in how she left college and no one has known where she has been for six months. The story goes along with her putting herself in situations that she needs help in figuring in how to get out of and Craig is the one who just happens to be there for most of the time with both of them fighting the desire they have for one another, which makes for an exciting book along with the rest of the story. this is a good book and a fast read. I got this book from net galley.  I give this 4 stars.
at June 16, 2015
Email ThisBlogThis!Share to TwitterShare to FacebookShare to Pinterest