LAST OF THE RED HOT RIDERS 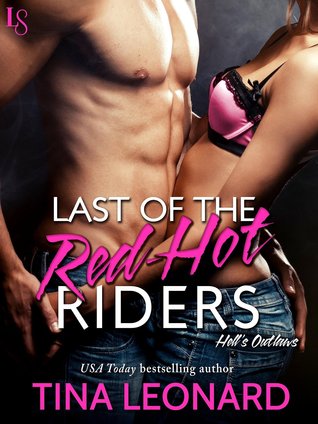 The toughest rodeo rider in Hell, Texas, discovers his tender side with a feisty cowgirl in this sexy new novel from USA Today bestselling author Tina Leonard.
Cameron Dix knows that becoming an elite rider is the first step to realizing her dream: owning a special-needs equestrian academy. Only one thing stands in her way—and he’s big, tall, and sizzles like a Texas steak. Superhunk Saint Markham claims that he isn’t happy about all the women galloping into town, but the heat in his eyes tells Cameron a different story. What else can a fiery redhead do but let her hair down and give in to desire hot enough to melt her saddle? Saint has seen what happens when women come marching into the Hell’s Outlaws Training Center: Strong men crumble. Problem is, he’s got rivals willing to train a talented lady rider like Cameron. But after one night of passion, he’s branded. And from the moment he kisses her ruby lips, Cameron is his—even if he’s too stubborn to admit it. Now Saint must stake his claim on a life of delicious sin with the woman he loves.

HUBBY'S REVIEW:
Cameron Dix wants to ride bulls in the rodeo and she wants Saint Markham ex-Navy Seal and former bull rider to train her. He won’t do it because he says women don’t belong on the back of a bull. This just makes her mad and forces her to continue to pester him. The town Mayor and also both of their boss’ tells them that they are in charge of the kissing booth for the upcoming town parade and fund raiser. This puts them closer together which he is already attracted to her and though she is trying to hold back her feelings she lets them out. She wants him to be more of the guy to stand back and let her do things and he is always trying to protect people and she takes it as smothering. She leaves and finds someone else to train her and he feels sorry for himself but can’t still tell her how he feels. She ends up coming back into town and then the fireworks start. I don’t know how many women would wait but okay. Overall this is a good book and the story was good. I got this book from net galley.   I give this 4 stars.
at June 16, 2015
Email ThisBlogThis!Share to TwitterShare to FacebookShare to Pinterest