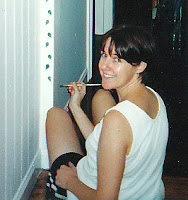 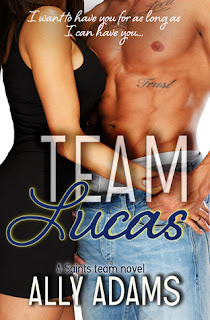 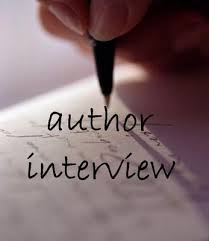 Rad-Reader:  Where did you get your inspiration for this storyline?

Ally:  I once worked for a national football team as the publicist and I was around the players all the time. Most were wonderful, some were a little egotistical and it was interesting watching the office girls and fans around them. Believe it or not, the bigger the star, the less ego in a lot of cases!

Rad-Reader:  Lucas was the McEnroe of Soccer did you fashion him after anyone you know?  Celebrity or not?

Ally:  Ha, good description but no, oddly enough. He almost wrote himself. I often wondered what it must be like to be in the skin of someone famous, successful or beautiful—how they perceived their world. So I thought Lucas was a good muse for that. I wanted him a little flawed too because everyone has a story, everyone has highs and lows in their life and they shape us. I often think we draw different things out of the lucky dip. Here’s Lucas who is wildly successful but is that because he had such a hard childhood? Did karma give him great success as an adult because his childhood was so bad? A bit like having done his time… if you know what I mean?

Rad-Reader:  Mia was in over her head from the get go but Lucas seemed taken by her because she was the first one that gave as good as she got.  Is that an accurate take on the situation?

Ally:  Yes, I think he was partly attracted to her because she didn’t fawn over him. But also because she was her own person. She was into fitness and studying. She didn’t need him which I suspect was an attractive trait to a man who has women on tap.

Rad-Reader:  Lucas had a core set of friends “The Team.”  They were brutal with him but truthful and loving too.  How did you come up with that part of the storyline and not take it to the extreme?

Ally:  Our childhood and school friends know us before we become adults and become ‘who we are’. These friends pick us and we pick them because we like them. We don’t care if they are famous or successful when we’re young. We just like them for themselves and that’s what is great about Lucas’s core friends. They knew him before the fame so he knew their friendship was genuine. It was one thing he could really rely on.  It was easy not to take this to the extreme because even though they had their own lives, they still wanted to support him, but just keep his feet a little on the ground.

Rad-Reader:  I loved that every time he called her “Minder” she called him things like “puke Oh I mean Luke.”  Was that done in order to humanize her to him?  Brilliant by the way.

Ally:  Thank you! Yes, Mia did it so he would remember she had a name and she didn’t like being called other names, anymore than he did. Especially puke and mucus!

Rad-Reader:  Did you research for this character of Lucas?

Ally:  I did a lot of research on his nature, abandoned children, the psyche of the successful and I watched endless hours of soccer and read abundant soccer reports. I had a reviewer complain that my soccer representation wasn’t accurate enough, but it is a minor part of the story and it is fiction.

Rad-Reader:  I remember reading passages to my hubby and saying Lucas is a man who was stunted in the toddler stage.  What gave you the idea to have Jason lock him in the room?  That scene was so unbelievable.  Had we not lived a life similar to that we would think all made up but not!

Ally:  Funny you should ask that because I almost took it out thinking that Lucas was too old for that. But his behavior was so deplorable that night when Mia was a guest of Jason’s and Sarah. I think Jason was quite shocked by it and embarrassed for Mia. When he pulled him away to pull him into line, he decided that if Lucas was going to act like a child, he’d treat him like one. You also have to remember that Jason has a long history with Lucas. They have supported each other since they were boys, so reining him in was not something new to their relationship, but something expected almost.

Rad-Reader:  Didn’t he actually play soccer for his dad’s team?  So why was he made that Mia did?  Was it because he was attracted to her from their first sparring match together that seemed to make him feel something for the first time?

Ally:  No, his Dad stuck him in boarding school and pretty much forgot him. It wasn’t until he became famous that his Dad realized his son was good for his business and opened doors for him with clients. You know … “is your son, Lucas Ainswright….etc?” But when Lucas went off the rails on the drugs, his father stepped in, got heavy handed and helped clean him up. Whether that was genuine love and care or self-motivated is questionable. So when Lucas’s dad was hiring minders to look after Lucas and Mia filled that role, it just put her at an immediate disadvantage with Lucas because her boss was his dad who he despised. I hope that makes sense.

Rad-Reader:  Since Mia was in love with Lucas how were you able to balance her character so long before you too it somewhere?  It was such a nice progression.

Ally:  Thank you Char. Lucas had a big part to play in that; he was so unlikeable! Each time Mia’s attraction to him threaten to overcome her, he did something particularly nasty. Also Mia is a strong character—sure of her worth and while she may have been attracted to Lucas; she was never going to sell her soul to have him. I suspect also, that given his type were usually long-legged beautiful models, she never really thought she would be his type.
Rad-Reader:  We adopted three children our eldest was a lot like Lucas.  I wish I knew back then the info now out that they could associate it in the PTSD under abandonment as the issue. I all make so much more sense.  How did you come up with that?

Ally:  I did a counseling qualification a while back and I find the psychology of character fascinating. I am also the child of a broken family and grew up without my father in my life. I know how it can affect how you look at relationships and how you form them. Lucas’s situation was terribly sad (it is fiction though) and you can understand his trust issues and dislike of his father’s interference in his life. He is quite textbook in that regard.

Rad-Reader:  If your book were to be made into a movie who would you want to play: 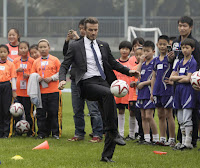 Ally:Ah tough one. I often gather images and do a ‘character board’ of photos. Some of the people on the board are models, so I don’t always know who they are but their look is how I perceive the character. I would love to know who you and the readers would put in the roles. Great question!

Lucas:  I had a young David Beckham in mind – sexy, confident, skilled and physically beautiful 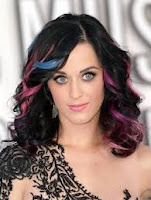 Rad-Reader:  What song reminds you of Team Lucas or best describes it?

Ally:  Ah I'm torn between: “I drove all night” – any version but Cyndi Lauper’s is good. It makes me think of Lucas arriving at Mia’s place after the game. He had been waiting for her to text or return his call while he was interstate playing soccer and she wouldn’t. So he gets off the plane, finds her address and goes straight to her house.

Or one of my favourites, Modern English’s “I Melt With You” from the “Valley Girl” movie. Two people from different worlds, come together and as the lyrics say, “I'll stop the world and melt with you, You've seen some changes and it's getting better all the time.” Mia brings about those changes in Lucas!

Rad-Reader:  Where can our readers find you?  Website, etc…
Ally:  Thanks for asking. I would love to connect with readers. I can be reached at:

Rad-Reader:  What do you have coming out next?  When?

Ally:  Well, I’m debating whether to write the next Saints book – the Russian’s story, or go onto something completely different. I would like to try writing the two perspectives—male and female—like Joanna Wylde does in her Reaper series. If I start the Saints’ Russian book, I’ll probably have it done and to my publisher by December/January.

Rad-Reader:  What one item can you not leave home without?

Ally:  My phone, like everyone else I guess. I love driving though and playing music in my car, it’s my real escape. I write whole book scenes when I’m driving.

Ally Adams is a journalist who lives in coastal Victoria, Australia with her husband and furry friends. She is a literature major, romance reader, avid reader, jogger, animal lover, keyboard recluse, and writer.

Thank you Char for this opportunity and thank you for liking Lucas and Mia!

We here at Rad-Reader can't thank you enough.  Lucas and Mia grew on me very quick.  The banter and then outburst of Lucas kept me on the edge of my seat.  It was so much a love story as well as a story of growing up and finding yourself amongst a world that is new yet that has already beat you up by the people who were supposed to have loved you the most.  Like other authors before you I know you might regret this but you're now part of Rad-Reader dysfunctional family. Hahaha!  We are so glad to have you too.
Thanks again,
Char

at September 04, 2015
Email ThisBlogThis!Share to TwitterShare to FacebookShare to Pinterest