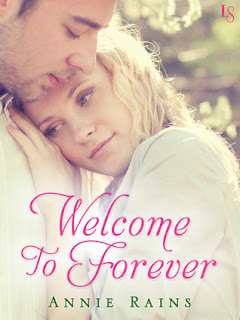 “Have you thought about that kiss?” she asked, as he leaned in close to fasten her seatbelt. She couldn’t control what was coming out of her mouth. “Because I have. A little.” She started laughing again. Val had warned her that she was a horrible drunk, and evidently, it was true.
“What have you thought about it?” he asked, his voice low and bristly. Her buckle snapped into place with a loud click. He could step back now, but he didn’t.
And she didn’t want him to. What was the point of being drunk if you couldn’t say and do what you wanted, and then apologize for it in the morning? No one blamed a drunk, they blamed the drink. “I thought that I liked it. The kiss. It was amazing.” She held her breath as he lingered in front of her, his hand still resting on the seat’s buckle.
“I thought the same thing.”
“You did?” She swallowed thickly, as her heart rode up her throat.
His brow lifted. “You sound surprised.”
“I’m out of practice.” She nibbled on her lower lip, drawing his gaze there. Then his gaze flicked back to her ring. Just the thought squashed the flutterings in her chest, leaving a deep ache that vibrated with the alcohol. “He’s been gone for two years,” she said.
Micah’s brows pinched together softly.
Explaining about John in her state wasn’t a good idea, though. She might start crying, which she didn’t do in front of others anymore, and right now all she wanted to do was forget everything but their kiss. That she wanted to remember. “You could kiss me again,” she said softly.
His smile deepened and, damn, he smelled good.
Leaning in closer to her ear, his hot breath melted her as he whispered, “Kat, you’ve had too much to drink. I’m taking you home now.”
Before she could process what he’d said, he stepped back and shut the Jeep’s door, the sound as offensive as if someone had crashed cymbals in her ears. A moment later, he reappeared on the driver’s side and cranked the engine, another sound that made her wince.
She closed her eyes, unsure of what to do with her drunken emotions.
“If I kiss you again, I want to be one hundred percent sure it’s what you want. Not because my almost ex is walking up and you want to help me out. Not because you’ve had too much to drink and want to escape.”
She suddenly felt very tired, as the Jeep Cherokee headed out of the parking lot. “So, you are going to kiss me again?” she asked. Before she could hear his answer, though, her eyes closed and the sounds of the road and his voice, and the blood thundering in her head, blurred together. She remembered their kiss, the feel of his stubble roughly brushing against her cheek, and the way he had smelled like pine and fudge brownies.
No, wait. His eyes reminded her of fudge brownies. He didn’t smell like them.
Her eyes fluttered open. Yeah, she was definitely going to regret tonight in the morning.

Rad-Reader:  Where did the storyline come from?

Annie:  It started with an image of a woman who didn’t want to remove her engagement ring after her fiancé had died. I didn’t know who the woman would be, or that it took place in a military town at first. The details slowly fell into place.

Rad-Reader:  How did you come up with the concept for Kat’s friendship club?

Annie:  Good question! I have no idea. Sometimes when I’m writing, things just appear on paper. That’s what happened with the Friendship Club.

Rad-Reader:  Why was Micah’s dad such a hard ass?  Will there be another book that will give us more tidbits as to how things have gone with Jessica and Ben?  Also the Col. and Micah?

Annie:  Colonel Peterson was a hard ass, but it was because he loved his son. He truly believed he was doing what was best for Micah by pushing his career in the military. Colonel Peterson believed in tough love. His intentions were good, even if they seemed harsh.

As for more storylines, Micah and his father’s relationship is mentioned a little bit in Book 2. Ben has some appearances in Book 2 as well. I’m not sure if Jessica will ever show back up in a story, but you never know!

Rad-Reader:  The book had a lot of areas that pulled at the heart strings.  Was it emotionally draining to write?

Annie:  Not at all! The more emotional a story is, the more excited I get when I’m writing. I thrive on emotion in scenes.
Rad-Reader:  I love the process of grief you showed for each of the characters.  Kat with John, Ben with mom, Micah with parents, Julie with boyfriend.  Will there be any resolutions for the last 3?

Annie:  Yes, all of the above!

Rad-Reader:  Val was a larger than life character and so was Lawson will they find love?

Rad-Reader:  How did the Mayor feel about his daughter’s crush on Ben and vice versa?

Annie:  I’m not sure the good mayor ever found out. And maybe that’s for the best!
Rad-Reader:  So glad.  Only asked since his aide made such a fuss saying he would have something to say about it yet he was invited to the party.  So Yay!

Rad-Reader:  Why did Kat fight going to the group after they declared John’s death?

Annie:  Kat was never married to John so she didn’t feel like she had a right to go to the support group. Others in the support group had been married for years and had families together. This was something Kat needed to work up to in the story. Even though she was only ever engaged to John, she was going through a lot of the same feelings that the others in the group were, and she needed to share her experience.

Rad-Reader:  Let me tell you when you had John’s mom calling and she sounded so excited my heart went to my toes.  I was so scared she was going to say they made a mistake about John being dead.  Was that what you wanted us to think or am I weird?

Annie:  Ha-ha! That idea never even crossed my mind. But that would have been an interesting turn of events!

Rad-Reader:  What genre of books do you like to read?

Annie:  I love contemporary romance and romantic suspense! Audiobooks are my favorite these days!


Annie:  Okay, I am going to totally cop-out on this question. I don’t watch a lot of movies or TV so I have no idea who I’d cast in the role. I love your cast for my characters, though. Especially your choice for Ben!

Rad-Reader:  What song out now best describes your book?

This would be the song sung by John to Kat if he knew he would be leaving Kat for good.
Poor body finally at rest. Bless Her & Her family.

Adley Stump-"Stay At Home Soldier"
For Kat when Micah is on his last deployment.

Annie:I have a playlist for all my books on my website: http://www.annierains.com/playlist.html

I love to pick songs that remind me of my books. They especially help me get back in the mood of the story when edits come rolling in! . . . For Welcome to Forever, I’m really partial to Home by Phillip Phillips. I think that’s a great one for this book!
1) OVER YOU by Miranda Lambert.

2) SEE YOU AGAIN by Carrie Underwood.

5) SOMEWHERE OVER THE RAINBOW by Israel Kamakowiwo'ole

Annie:  Welcome Home, Cowboy (Book 2 in my Hero’s Welcome series) comes out on April 26, 2016. This will be Lawson and Julie’s story. Check out this lovely cover J 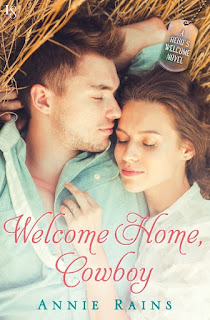 Then Welcoming the Bad Boy (Book 3 in the series) comes out on August 2. It follows Val and Bad Boy Marine, Griffin Black.

Rad-Reader:  Where can our readers by your books?

Rad-Reader:  How did you get started writing?

Annie:  I think I was born writing. I started making up stories in my head before I could write. When I was six I remember telling my grandfather I wanted to be an author when I grew up. That dream never left me. It took me quite a bit longer to actually make it happen, and I still have dreams I’ve yet to achieve. It wasn’t until I started seeking out classes and like-minded people that doors started to open for me in publishing. So my advice to aspiring authors would be to find a class, learn as much as you can about the craft, find a good mentor and a critique partner, and write ALL the time. It takes a lot of writing to find your voice!

Thank you for this wonderful interview, Char! This was a lot of fun!

Annie,
I cannot Thank you enough for being with us today.  Your book was such a pleasure to read.  Your characters were such a joy to bring into my home and share with my hubby as I read.  The justice that you not only give to those with special needs but to those that sure our country with this book is just been an honor to read.  As a mother with children with special needs children you were able to put a voice to feels that our children have but we as parents have.  I can't even imagine adding the elements of being a single parent and serving in the armed force to that.  Thanks again.  Welcome to Rad-Reader Misfits.
at February 19, 2016
Email ThisBlogThis!Share to TwitterShare to FacebookShare to Pinterest