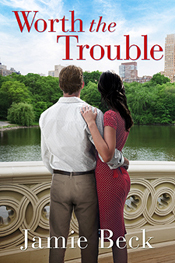 Worth the Trouble (St. James 2)
Cover girl Cat St. James’s picture-perfect life is anything but flawless. Luckily, she’s a master of hiding the truth from the camera. Relying on that skill, she conceals her latest secret from her family while attending her brother’s wedding. Her only trouble now is Hank Mitchell—the soft-spoken carpenter she’d once brushed aside. Seeing him at the reception underscores her private heartache and ignites unwelcome longing, which she promptly drowns in champagne.
Hank is no stranger to sacrifice, having set aside his own ambitions to take care of his family. One thing he won’t forsake is his pride, which Cat already wounded once. But when the maddening beauty’s reckless behavior forces him to rush to her rescue, he sets in motion a series of events that leads Cat to make a business proposal granting him his dream job.
When Cat and Hank mix business with pleasure, promises and secrets unravel, and each must decide if and what they’ll surrender for love. 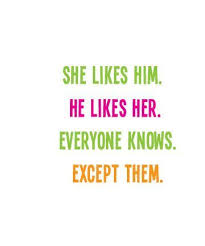 “Good night, Catalina. Sleep well.” He turned to go.
“Wait!” She shifted her weight up onto her elbow. Thick falls of hair cascaded over her shoulders as she patted the edge of the bed. “Come back.”
He crossed his arms and faced her. “Why?”
“Please,” she said, sitting up in bed.
The blankets now bunched around her waist. That familiar longing rushed back once again, tempting him beyond bearing. He could give in, crawl in beside her to take what she offered. Use her the same way she’d used him. But he’d never been that guy, and it’d be a cold day in hell before he’d allow Cat to turn him into one.
Hank inhaled slowly then sat at the edge of the mattress while rubbing his hands back and forth across the tops of his thighs.
“Thanks for helping me,” she said.
Her expression reminded him of the way his sisters used to look when suffering through one of his lectures. He stopped himself from touching her. “You’re welcome.”
Her uncertain smile twisted him up inside as she reached one hand up and fingered the ends of his hair. “Kiss me goodnight.”
All the blood drained from his head and raced to his crotch. The relentless throbbing between his legs urged him to comply despite his better judgment. Just a kiss. 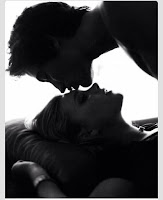 As if watching himself in a dream, he saw his fingers caress her cheek. She raised her chin and parted her lips, and he pressed his mouth against hers. He gave over to the moment, to taste her once more, to slip his tongue inside her mouth and tangle with hers. The faint taste of champagne and honey overwhelmed his senses as he grazed her lower lip with his teeth.
Time slowed. Every part of his body came alive. She bulldozed her fingers through his hair while moaning, engulfing him in desire.
“Like I remember,” she whispered against his skin. He’d been teetering on the verge of making a gigantic mistake, until her words summoned bitter reminders of the last time he fell for her games. Abruptly, he grabbed her wrists and pushed back.
“Hank!” She fell back into her pillow. “Stay.”
“No.” He had to get out of her room before hell finished freezing over. “Good night.”
Rising from the mattress, he reached over and turned off the lamp. His gaze lingered on her diary again, but he retreated from the bed.
“You’re mad about before,” she muttered, half asleep already. “But trust me, I did you a huge favor.”
He froze in his tracks. Glancing over his shoulder, his breathing slowed as he absorbed her words and the glimpse of self-doubt she hid from the cameras. As apologies go, it wasn’t much. Would she have admitted it if she were sober? Did she really believe what she’d said? Did it even matter anymore?
Her gentle snore ended his musing. He crept from her room. Standing in the hall with his palm pressed against her closed door, he waited a minute longer before shoving his hand in his pocket and heading down the hall.

at March 10, 2016
Email ThisBlogThis!Share to TwitterShare to FacebookShare to Pinterest