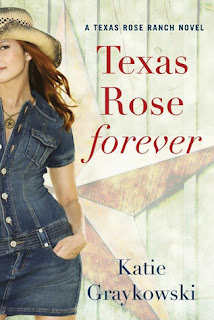 Everything’s bigger in Texas, and that goes double at the Texas Rose Ranch, home to the Rose family through five generations of toil, sweat, and scandal. From the moment CanDee McCain is hired to write a history of the Roses’ empire, she’s bowled over by tall, sexy Cinco Rose. True, the man initially mistakes her for a stripper, but he certainly puts the man in manly. For the first time since her cheating ex left, stealing her novel-in-progress in the process, CanDee is ready to have a little fun.
No woman has ever made Cinco feel both so at ease and so turned on. Since his divorce, he’s preferred a saddle and solitude to risking his heart again. Yet something draws him to the fast-talking, leggy redhead. CanDee’s not just sweet; she’s smart and brave too. But her research is uncovering long-buried secrets that could jeopardize everything the Roses prize most—and destroy a love that’s just begun to bloom.

Rad-Reader:  Where did you come up with this story?

Katie:  I was approached by Montlake to write a new series for them. I gave them a choice of Formula One, a General Hospital type story set in small Texas town, or a Texas Ranch. Thank God they chose the ranch because I don’t know anything about Formula One or General Hospital.

Rad-Reader:  Which character did you come up with first?  Did that character set the tone of the story?

Katie:  The heroine, CanDee, came first. Believe it or not, I know two people named CanDee, both are Candice Deeann.

Rad-Reader:  Do you have a favorite character that just spoke to you more than the others?  If so, why?

Katie:  Believe it or not, the character that spoke to me the most was Edith who we really don’t meet, but only read about. Also, Lefty is still speaking to me. I can’t get him to shut up. I love secondary characters because they can say and do just about anything.
Rad-Reader:  Lefty is the grandfather they all needed even with the grouchiness but especially with the playfulness.  I just loved him.  He was by far my favorite.

Rad-Reader:  Where did you come up with all the antics that happen within the story?  Were they from any life experiences from your life or others you have known?

Katie:  The practical jokes between Lefty and CanDee were so much fun to write. While I have never been in a practical joke battle, I hope to one day. Lefty is based on my Uncle Virgil who passed away 3 years ago. He was a WWII vet who had a cattle ranch, loved children, and had more street smarts than anyone I have ever known. And he was so much fun and such a character. In 1942, he left high school to fight in WWII and never graduated high school. Apparently, this always bothered him, but I never remember him talking about it. So…when Texas passed a law several years ago that said that all WWII vets who left high school to fight would automatically receive a high school diploma, he was so excited. I’m pretty sure that the state meant that they would mail him one, but no, he insisted on all the pomp and circumstance of a high school graduation. He did the whole cap and gown, walk across the stage, and tassel flip thing.
Rad-Reader:  All I have to say is the toothpaste and oreos is my favorite.

Rad-Reader:  Explain to us what the real fears are that Cinco and CanDee about getting into relationships?

Katie:  Cinco and CanDee both have trust issues and to a certain extent self-esteem issues. Both had been in relationships where their significant other cheated. That type of betrayal brings a lot of what-did-I-do wrong.

Rad-Reader:  Can you tell us a little about each of Cinco’s brothers?  They are only touched on in the book.

Katie:  Cinco, Rowdy, Dallas, Worth, and T-Bone all have their own stories to tell. All five brothers work at the Texas Rose Ranch in different branches of the ranch. Rowdy is a winemaker, Dallas is in charge of the exotic ranch animals and works with the nature conservancy, Worth runs the quarry and makes furniture, T-Bone is a farmer. All brothers will find their soulmates…I promise. And you’ll have to read to find out where Rowdy goes one week a year. Trust me, you won’t figure it out.

Rad-Reader:  Will each brother have their own book?

Katie:  Yes. Rowdy’s story is next and it’s almost finished.

Rad-Reader:  Will CanDee ever write her mystery novel?

Katie:  Yes, and it’s going to do VERY well.

Rad-Reader:  Will Phillip ever get his comeuppance?

Rad-Reader:  Lefty had it out for CanDee after she pulled a fast one.  Why really was there a two year wait for a driving test?

Rad-Reader:  Loved the way you worked in CanDee’s awareness after her encounter with Phillip.  How did you come up with such an easy transition to talking about any kind of abuse?  Brilliant by the way!

Katie:  I didn’t do it on purpose, in fact, I didn’t realize that I’d done it until I was doing the final read through. I was raised by a strong female role model (my mom) who taught me to never take abuse from anyone.

Many years ago, I worked with a lady who was a lot like my mother. This lady was a take no crap person, but one day she told me that her first husband was physically abusive. She was with him for almost 2 decades. I was speechless. She wasn’t weak or meek and didn’t fit my idea of an abuse victim, but she was a victim all the same. I remember her saying that her husband hadn’t started out being abusive. It took time and started with small criticisms about her appearance. Once he’d isolated her, broken down her self-esteem, that’s when the physical abuse started. At the time, she was so dependent on him, that she took the abuse and thought it was all her fault. I hope that CanDee’s story helps others to see that abuse happens everywhere, every day, and to people who don’t seem the type.

Rad-Reader:  Rowdy was his own kind of man and his family kept making sure he knew he would be accepted no matter what.  Why was this important to you that this message be heard?

Katie:  Family should always love you…no matter what. I have a friend who is gay. His parents have disowned him. It breaks my heart that his parents, who created him, have cast him aside because he finally has the courage to be the person he’s meant to be. We may not like the choices our family makes, but those choices have nothing to do with love. Love shouldn’t come with an expiration date or come with conditions.

Rad-Reader:  If your book was made into a movie who would you like to play…

Katie:  This is really hard because I don’t always think of my characters in terms of looks.

Cinco:  Christian Kane—okay, I totally had him in mind for Cinco from the start. I know he’s too old, but he’s just so pretty to look at.
http://s779.photobucket.com/user/medievalgirl13/media/Christian%20Kane/Hats%20Pic%20Spam/On%20Screen%20Hats/00q0rwf5.jpg.html

Lucy:  Maybe Gwyneth Paltrow—she’s too young and too tall, but I think she’d do Lucy justice.
http://www.demeterclarc.com/wp-content/uploads/images/2012/05/GWYNETH-PALTROW-MET-2012.jpg

Kate:  Wow, I just downloaded “Glass”. It’s perfect! Not all of my books have a soundtrack, but some of them do. Texas Rose Forever didn’t.

Katie:  Always, but I didn’t have the guts to really pursue it until 10 or so years ago. I wrote in secret and didn’t tell anyone for a long time. I remember when I finally worked up the courage to tell my husband. He just nodded and went back to whatever he was doing. Other family members laughed at me…well they aren’t laughing now.

Rad-Reader:  How hard was it to get started as a published author once your book was written.

Katie:  My road to publication was a bit rocky. I started by entering writing contests and I’d won/and/or finaled in almost every romance writing contest in the United States, but I couldn’t get a book contract. So, I self published my first book, Place Your Betts, in late 2013. By January 2014, I'd quite my job and I’ve been a full time writer ever since.

Katie:  www.katiegraykowski.com or on Amazon.

Rad-Reader:  Where on the Web can our readers find you? 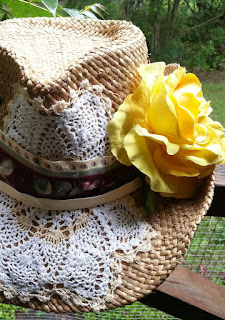 Katie,
Thank you so much for your time and for your amazingly funny book.  My hubby and I laughed so hard that we were crying.  You have such a way with words.  A way of making the simplest of mishaps turn into the craziest adventures.  Turning all those around the ones stuck in the middle of it into the suckers of the jokes and mishaps.
Like you I too loved Edith and Lefty the most and hope that the readers see it that way also.  They are two of several of your characters that make this story just so much fun to read with multilayers to work through. You find yourself in the middle of a mystery, a love story, and a revenge plot of a humorous sorts.
Thanks again and please stop by again any time and say hello because you are now part of 1 Rad-Reader Reviews Misfits.


Char J
at April 01, 2016
Email ThisBlogThis!Share to TwitterShare to FacebookShare to Pinterest