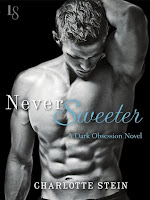 Letty Carmichael can’t believe her eyes when she catches a glimpse of her high school tormenter, wrestling champ Tate Sullivan, on campus. College was supposed to be her escape from Tate’s constant ridicule. Now he’s in her classes again, just waiting for his chance to make her life hell. But when Letty and Tate are partnered up for an assignment—on sex in cinema, of all things—she starts to see a kinder, gentler side of him. And when she realizes Tate knows more about sex than she could ever guess at, he soon starts making her blush in a whole new way.

Tate Sullivan is haunted by regret over his cruelty toward Letty. So when she agrees to work with him, he seizes his chance to make amends. He can’t blame her for not believing he’s for real, but soon Tate starts to break down her wall. She wants to know about passion, desire, lust—topics he is well versed in. And in return she offers the one thing he always wanted: the chance to be more than just a jock.

Letty is shocked by how sensitive Tate can be. Still, desiring him feels ludicrous. Loving him is impossible. Craving him is beyond all reason. So why can’t she stop?

Was a very interesting book of a coming of age couple.  These two went to school together for a long time.  But in high school things were not good at all.  In fact, you could say they were terrible.
Letty Carmichael has always been a curvy girl and a little unsure of herself and her looks.  So when in high school the class bully singled her out at every turn she would pull into herself even more. Making her trip over her own book bag, following her almost lying in wait, so on the, not of her not attempted murder as they called it or as it ended up being called an accident.  Tate Sullivan, his two friends were present too, Jason and Patrick.  Jason was the one behind the wheel, which gave her hope, thinking he had the most sense.  Well, she was wrong.  But she never thought in a million years he would try and run her over.
You see her car had broken down and rather than call her dad she had called and left a message for her friends for help.  She wanted to be the responsible senior on the verge of graduation who could handle her own problems.  After all she was going to be going away to college.  So she started walking home.  She left her Camaro on the side of the road and moved toward home.  She had passed the bluffs not too far back where she saw Tate throwing something at Jason.  But now she could hear them coming up behind her.  She knew they were going to pull a stunt on her it was not a good night for her.  She just knew it.
She tried to walk faster and hide herself by crossing her arms across her middle.  She knew she was too big a target she was a curvy girl with big boobs, butt, and hips.  Her thighs alone rubbed so how would she think she would get her arms to hide her?  When she heard honking and hollering she knew she was in trouble.  They were yelling, “Fatty, thunder thighs, and flabby!”  Then she tried to speed up.  She only jiggled for her trouble not a help.  Then she heard them throw something.  She knew it was Tate since he was always the one who took things too far, always.
Something inside her knew they were going to run her over, the scared part of her brain said it.  Seeing Jason behind the wheel gave her hope that was misplaced.  Because in her head it would have been Tate doing it or telling him to.  So instead of being scared she got angry.  Just stopping.  No more backing down!  No more going the other way!  She came to a dead stop!  Then she just stared at them.  The three boys who had made high school hell just were looking at her.
They stopped laughing and hollering.  All she could hear was the wind coming off the bluffs which was behind her, rattle of the trees.  For a minute she thought how nice the quiet was.  When Jason revived the engine twice.  Her warning shot, she knows now.  They were going to do it!  The bullies that had made her miserable because they actually were going to hit her with the truck.  She went over the bluffs to the jagged rocks to a bloody silence.  They tried to kill her and NO ONE COULD EVER TELL HER DIFFERENT.
Fast forward two years, Letty is finally at tiny Breckenridge College after two years of hospitals, surgeries, and therapy.  She has made it to the other side.  When she thinks she is hallucinating.  She is really hoping it is the lighting in the classroom.  What other explanation can there be for Tate Sullivan to be there when he should be a million miles away?  Like at Stanford?
There weren’t to many people as big as Tate.  Tate stood at six feet five inches in bare feet and his shoulders were huge.  Her emotions were betraying her as she side glanced him because he was so ugly and handsome at the same time.  His butter soft mouth and brutal jaw at the same time.  Then there were his soft focus blue eyes that should not go with his busted nose.  Then there were his jug ears.  Which made her think of all that he had done to torment her right?  She was scared and torn wanting to be the better person…
Tate comes to this with his own set of issues which this author gives you the story from his POV also.  There were some things I would have like more clear cut, like why Jason hit her?  What did Tate do for those two years?  Also a prologue would have been nice.


This is a total coming of sexual age book and a how to manual of how to please your partner.  But also an eye opener if parents are thinking your kids are not having sex by Tate’s answer to being a virgin.  Amazing.  Ladies and gentlemen to you will need your fans for this one but overall a good story.  I give this book 4 stars.  Provided by netgalley.com.  Follow us at:  www.1rad-readerreviews.com.
at June 29, 2016
Email ThisBlogThis!Share to TwitterShare to FacebookShare to Pinterest