HERE TOMORROW AUTHOR OF: MY KIND OF YOU : TRACY BROGAN : see excerpt 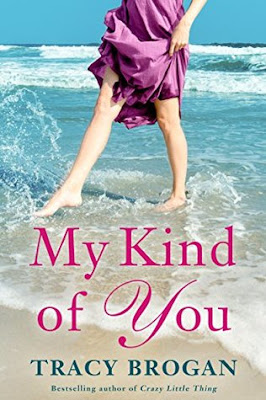 Emily Callaghan never expected to spend another summer on Wenniway Island. Yet here she is, back in her quaint northern Michigan hometown of Trillium Bay, divorced, flat broke, and dragging along her precocious twelve-year-old. It’s a simple arrangement: Emily, a house flipper, will renovate one of her grandmother’s rental properties in exchange for a much-needed loan. Once a wild child, the reformed Emily also hopes to remodel her reputation and show her family she’s all grown up.

But coming home is never simple. Emily’s dad is more distant than ever. Her younger sister is dating a much older man, and Emily’s worried it’s a mistake. The cottage remodel grows increasingly daunting. And then there’s handsome out-of-towner Ryan Taggert…

Ryan has his own family drama. A smart, ambitious land developer, he’s come to Wenniway to rescue his father from the grips of a new girlfriend and protect their family business. But he’s quickly distracted by gorgeous, witty Emily Callaghan.

There’s no denying the attraction between Emily and Ryan. But will their conflicting interests destroy any chance at love? Or will Emily finally get the chance to rebuild her life—and repair her heart?

The first thing Emily noticed as she got off the ferry at Wenniway Island and walked with Chloe down the short dock to Main Street of Trillium Bay, was the wonderfully familiar aroma of fudge, lilacs… and horse manure. An earthy-sweet mixture that sent her mind scampering right back to childhood summers. Their last two visits had been in December, just fast trips back for Christmas, and long after all the flowers had wilted away and many of the horses had been moved back to the mainland for their long winter’s nap. She hadn’t noticed the absence of the smell then, but now it filled her nose, triggering a flood of memories, both happy and sad. She pushed the sad ones aside for now. No sense in dwelling.
The next thing Emily noticed was Dmitri Krushnic in his beekeepers hat talking to a man on a horse. This, in and of itself was not that unusual because she’d known Dmitri Krushnic since she was a little girl and he always wore his bee keeping hat, even when he was nowhere near his bees. Seeing a man on a horse wasn’t that odd either. Cars had been banned on Wenniway Island since 1891 so horses, bikes, and good old-fashioned walking were the general modes of transportation. What was slightly askew about this scene, however, was that the man on the horse appeared to be wearing nothing but a very tiny loin cloth and a very large Native American headdress.
“What the what?” Emily muttered, reaching out to cover the unsuspecting eyes of her too-young-for-this daughter. “Chloe, don’t look.”
“It’s too late,” Chloe said mildly. “The vision is already seared into my retinas. That’s the whitest skin I’ve ever seen.”
“Yes, it is.” Emily nodded, dropping her hands to her side to stare alongside her daughter. 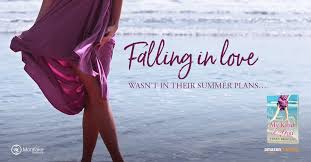 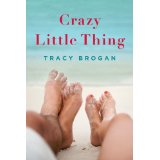 Sadie Turner can organize just about anything — except her own life. When her cheating spouse topples Sadie’s impeccably tidy world, she packs up her kids for a summer vacation at her aunt’s lake house, hoping to relax, reboot, and formulate a new plan — one that does not include men.
Any men.
But eccentric Aunt Dody has other plans; she’s determined to see Sadie have a little fun—with Desmond, the sexy new neighbor. Tall, tanned, muscular—and even great with her kids, Desmond is Sadie’s worst nightmare. He must have a flaw—he’s a man, after all—so Sadie vows to keep her distance. But as summer blazes on, their attraction ignites, and the life Sadie is trying so hard to simplify only gets more complicated. But maybe a little chaos is just what she needs to get her future, and her dreams of love, back in order.

at May 18, 2017
Email ThisBlogThis!Share to TwitterShare to FacebookShare to Pinterest