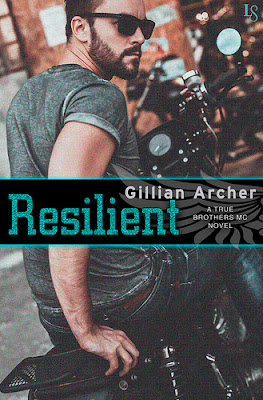 Rad-Reader:  What inspired you to write this series?

Gillian:  I wrote book 1, RUTHLESS, in response to a call for submissions for a totally different publisher. I am a huge fan of Joanna Wylde and Kristen Ashley and have always wanted to write a story about a bad boy anti-hero so Zag and the True Brothers MC were born. Unfortunately, that publisher didn't ultimately sign RUTHLESS, but Sue Grimshaw and Loveswept loved the book and signed me to a three book deal!

Gillian:  Tank initially showed up in book 2, and I wanted to know who this stoic, silent guy was so I had to write his story. Plus I thought someone as sassy and opinionated as Nicole needed a steady guy like Tank.

Rad-Reader:  How did you come up with Tanks character?

Gillian:   None of my characters are carbon copies of anyone I know in real life. Of anyone, Tank is most like one of my friends in college who quit school to be a Navy SEAL. He was the most-commitment phobic person I'd ever met. But after September 11th, he wanted to be a SEAL and serve our country. I tried to talk him out of it. I was afraid he wouldn't make the SEALs and would go AWOL. He was the type of person who'd plan to take classes with you in the fall but then skip the semester. I thought for sure we'd be visiting him in a brig. But he did it. He joined the Navy, became a SEAL, and served two tours. I'm really proud of him and glad he proved me wrong.

Rad-Reader:  Why hasn’t Nicole told her friends her background?

Gillian:  Nicole was ashamed of her dad at first, and she'd made a pact with her brother not to tell anyone. They wanted to start fresh. But the secret ate at her.

Rad-Reader:  Why does Tank think he is a throwaway?

Gillian:  Tank didn't have the best childhood--his father died when he was six and since his mom worked so much it was just him and his sister. So he had some abandonment issues. That combined with some of the things he has seen and done makes him believe that maybe he's not worthy.

Rad-Reader:  Jessica says some really mean stuff and she just takes it why?

Rad-Reader:  Do you think it was their humor that wins them over with one another?

Gillian:  I think that love and laughter go hand in hand. And those are the type of relationships that I love to write about.

Rad-Reader:  Tank is the one that becomes attached first don’t you think?  Why is that?

Gillian:  Tank had been open to love before, and he had the best example of love with his really good friends, Stitch and Brittany. He was ready. Nicole took a little more convincing ;)

Gillian:  Tank's ex is one of those people who love drama. Which can be fun when everything is happy or when the drama doesn't have to do with you. But a little bit of jealousy combined with some gossip...

Rad-Reader:  Is Nicole more afraid to have a relationship with Tank now that she knows him or not have one?

Gillian:  Hahaha! It's just one of those things that you don't really think about. Yes, he took her to the wedding but when that phone call came, he was all into club business mode. So, he really wasn't thinking!
Rad-Reader:  I was like, "What?"  "Oh Hell No! Hahaha!  I knew she should have brought her own car!" Hahaha! ;)~

Rad-Reader:  Why did Nicole’s brother forgive their father so easy?  Especially after everything she says they went through?

Rad-Reader:  If your book was made into movie who would you want to play…

Gillian:  This is so much fun! I love your choices. Here's mine:

Rad-Reader:  What song best describes the couple or your book as a whole?
What if I Stay ~ Chris Young
For Tank's "One and Done, Two and Shoo." Now Chris Young teach him how to say...What if I Stay.

Gillian:  Oooh I love your pick. This is hard! I think I gotta go with:
Chasing Pavements by Adele

Rad-Reader:  What is your favorite vacation spot?

Gillian:  I guess if I pick one I've been to more than once, it'd be Hawaii. I love the food and the culture and the beaches!

Rad-Reader:  What do you like to do on your days off from writing?

Gillian:  I am a huge and voracious reader so if I'm not writing, I'm reading. I love Kristen Ashley, Joanna Wylde, Caitlin Crews, Carol Marinelli, Kristen Callihan, Nicole Snow... I can go on and on!

Rad-Reader:  What is your least favorite food?

Gillian:  I hate mushrooms. When I was little my parents would cook liver and onions and mushrooms. There is not enough ketchup in the world to cover that taste up! So for me, mushrooms have the same taste/texture as a liver. Ugh.
Rad-Reader:  Right there with you :(~

Gillian:  My next release is a little different; it’s a contemporary royal romance titled Reluctantly Royal and will be out in January 2018. It’s about a prince from Monaco and his incognito vacation in Vegas where he meets a spontaneous local girl. He doesn’t tell her that he’s a prince, but she’s keeping a secret from him too...

Gillian:  My books are available wide through all major retailers

Gillian:  I'm a bit of an introvert, but I'm trying to get out there more on social media. You can find me

Thanks so much for having me! I had a blast :)

THANKS SO MUCH FOR BEING WITH US.  WE LOVE SO MUCH WHEN OUR AUTHOR ENJOY OUR QUESTIONS ABOUT THEIR STORIES AS MUCH AS WE LIKE READING AND ASKING THE QUESTIONS.
WE KNOW YOU ALL WORK HARD AND LONG HOURS ON THEM AND WE LIKE TO LET YOU KNOW WE DO READ THEM.


COME BACK WHEN YOU HAVE A NEW BOOK COMING OUT AND USE THE SHOUT OUT PAGE TO GET THE WORKOUT.  YOU TOO ARE NOW A 1 RAD-READER MISFIT.  THANKS AGAIN!
CHAR & PAT
at July 21, 2017
Email ThisBlogThis!Share to TwitterShare to FacebookShare to Pinterest