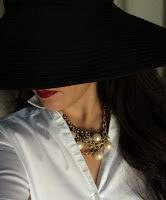 Part 1: From London with Love

Fire and ice have nothing on Angela Holguín and fellow MBA student Soren Lund. When they first met at school in the exciting seaside city of Barcelona, Angela was intrigued by the aloof Dane; he was enthralled by the vivacious Californian. But their timing was off and they went their separate ways – until Fate and Destiny put them back in the same city: London. (Scroll for more)

In the British capital, Angela and Soren not only reunite, their desire reignites. This time they are determined not to let love slip through their fingers—despite the many obstacles posed by others. They tumble into one another’s arms and embark upon a passionate journey in the chic, bustling streets of London. But when Angela’s ex-shows up, will their new romance be strong enough to persevere? To whom will Angela’s heart beckon? 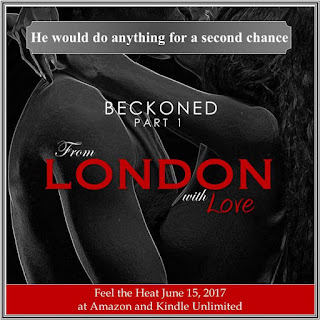 If you had told her at the beginning of the evening that she would end up between the cool percale sheets of his bed she would have thought you were lying. Of course, it wasn’t the exact scenario she had imagined because he was lying asleep in the guest room ten feet away.
What a gentleman.
She couldn’t believe that after eleven months of yearning she could be so close to him—and yet so far. Had she really flown thousands of miles to fall short of her dearest fantasy by mere footsteps?
Of course, there was that minor snag that she didn’t want to dwell on…the fact that she had flown here to visit a different man than the one whose bed she now found herself in.
She rubbed her hands over the sleeves of the freshly laundered shirt he had thoughtfully left on the bed for her—imagining it was his arms instead of her own. She would have preferred a shirt that smelled like him so she could feel like she was wrapped up inside his embrace.
She turned her face into the pillow and breathed in the scent that lingered there: a cool, woodsy smell like a forest of snow-capped conifers. A warm heat spread through her limbs, igniting something within her. She rolled over on her knees, pulled the sheets back and ran her nose all over the bed, deeply inhaling the musky evidence that his body had in fact been there at one time.
Fuck, this was really turning her on.

On the other side of town, Soren looked at his phone, stunned. He couldn’t believe what had just happened. If an angel had appeared to him in physical form and trumpeted his name, he would have been less surprised.
Standing up from his desk, Soren walked towards the wall of windows that overlooked the Thames. The summer sun was still high in the sky, and somehow the view of London looked brighter than it had earlier today.
His name on her lips was the sweetest sound he had ever heard. Angela’s voice echoed in his mind, lingering like a brass band.
He could vividly remember the last time he had seen her—walking away from him—unspoken words of love frozen on his lips.
He vowed that this time he would not make the same mistake again.

Buy it now BECKONED, Part 1: From London with Love on Amazon and Kindle Unlimited

Can fire and ice both survive?
Fire and ice have nothing on Angela Holguín and fellow MBA student Soren Lund. When they first met at school in the exciting seaside city of Barcelona, Angela was intrigued by the aloof Dane; he was enthralled by the vivacious Californian. But their timing was off and they went their separate ways – until Fate and Destiny put them back in the same city: London.
In the British capital, Angela and Soren not only reunite, their desire reignites. This time they are determined not to let love slip through their fingers. They tumble into each other’s arms and embark upon a passionate journey that takes them from the chic, bustling streets of London to the romantic, historic byways of Bath and back again. It is there, at their final destination, that Angela and Soren must face reality.  While opposites attract, they might not be able to coexist. In the next 3-days, they will have to decide if what they have is truly love or simply the beckoning of desire.

After forty minutes, the mango salsa was ready, the pilaf had been fluffed, and the salmon was resting in the oven. Angela wanted to keep the fish warm and the salsa cold, so she couldn’t plate anything until Soren arrived.

“Hey, a fox trot,” Rolfe said, noticing the music on the radio as he grabbed Angela and pulled her into the living room for an impromptu dance.

“Come on, just one dance. For old times,” he said as he spun her under his arm, pulling her into his expert dance frame.

Angela giggled, the combination of sake and spinning making her giddy, erasing any reservations she had wanted to express.

Angela laughed up a storm as her body took over, moving to the rhythm of the music in an almost meditative trance. Rolfe was an amazing partner; he could dance to any song that came on. He was so good at leading, that even though she only had a tiny bit of experience compared to him, he made her look good as he partnered her through song after song.

As one song came to an end, Rolfe spun Angela away from him and started to clap.

“Very good Angela. I forgot what a natural you are. You have the basic foxtrot down. Do you want to learn a new step?” Rolfe asked, running his hand through his hair, his face flushed with their exercise.

Angela took a moment to catch her breath. “Sure, what is it?”

She pursed her lips. “Sounds complicated.”

He shook his head. “It looks complicated because there is a lot of movement in your upper body.” He gracefully put his fingertips on his waist and moved his torso from side to side.

The movement reminded Angela of a Jane Fonda workout move.

He continued to explain, “But your lower body is almost static. See?” He pointed to his hips as his torso continued to move. “Let me show you.” He waved her forward, holding his regal frame open for her to walk into.

She felt his fingers close around her right hand, his own right hand gently but firmly placed on her back. She focused all of her attention on his right hand, waiting for the subtle changes in pressure that would indicate which way she should move.

“First we go to your right,” he said.

Slowly, she felt him pushing her to the right and then pull her back toward the left. She almost missed the quick change in direction.

“Can we try that again?” she asked. “So, we go to my right and then smoothly transition back to the left, right?”

He shook his head. “No. We go to your right, then barely left, and we keep left.”

She furrowed her brows. “Right. We go right and then left.”

She furrowed her brow, confused. “That’s what I said.” Then she cocked her head and suddenly, clarity struck and she laughed, clapping her hands together. “I see the problem. By right I actually meant correct. So we go right then left, correct?”

He laughed, understanding lighting up his eyes. “Oh yes. You are correct. I see you meant right as in correct not the direction.”

She closed her eyes, focusing on his right hand on her back as they swayed elegantly from side to side.

“Have your head follow your torso. It’s like you are a stalk of grass swaying in the wind. You don’t really notice when it stops moving right and starts changing direction, it just flows fluidly with the wind.”

Her eyes still closed, she rolled her head from right to left slowly; trying to imagine what it would be like to be the stalk of grass.

She was so engrossed in the movement that she completely lost track of time when suddenly she heard a throat clearing.

And he did not look happy.

Buy it now BECKONED, Part 2: From Bath with Love on Amazon and Kindle Unlimited 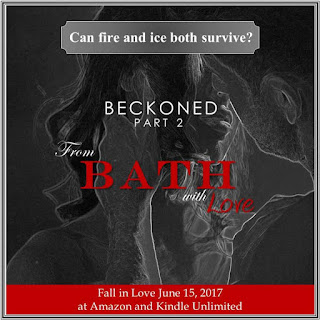 Aviva Vaughn is a lover of food, travel, and books. She has been a voracious reader her whole life finishing Louisa May Alcott’s Little Women when she was five.
She likes to laugh, eat and be intellectually stimulated, preferably at the same time; and enjoys reading and writing about strong, modern characters, no matter what era or planet they are in/on.
She isn’t afraid to try new things, which has made for an interesting—although not always straight forward—life. Her favorite “two truths and a lie” line is: I have ridden bareback in the Navajo nation, I have jumped out of an airplane over New Zealand, and I have gone spelunking in Costa Rica. Answer will appear at the end of BECKONED, Part 4: From Barcelona with Love ;^)
She lives in Southern California.