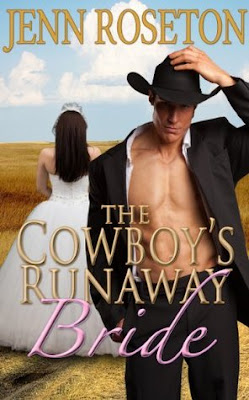 What happens when a runaway bride meets a wealthy cowboy?

Realizing her wedding is a sham, curvy Maddie Stanton takes to her kitten heels and escapes the ceremony - still dressed in her bridal gown!

Stranded on the Wyoming highway with a flat tire, rescue appears in the form of Garrett Trask. When the handsome cowboy hires her to work on his ranch, Maddie jumps at the offer, grateful to leave her past behind her.

She never counted on falling in love …

But when she discovers a secret from Garrett’s past, her newfound happiness is shattered. Can this sexy cowboy convince Maddie he loves her, and her curves? Or will she forever remain the runaway bride?
This is a sexy contemporary romance novella.

Maddie puffed, out of breath, forcing her legs to slow down to a fast walk. Her ivory silk-and-taffeta gown rustled in the gentle afternoon breeze as she strode down the Wyoming highway. She couldn’t believe it - escaping from her own wedding and her car had a flat tire!
Maddie chided herself, on not realizing what was really behind Howard’s proposal. Although they’d been dating for a few months, she’d been totally surprised when he’d asked her to marry him. A curvy twenty-eight-year-old, she hadn’t exactly been inundated with men wanting to date her. And since her parents had been hinting for some time now that she should find a nice man and get married, she'd thought, why not?
Why not ...
When Howard had shown her the itinerary for their honeymoon, he’d scheduled everything down to the last hour - including sex. Maddie’s lips tightened. A whole five minutes for sex on her honeymoon. That’s how much her bridegroom desired her. Oh, he had penciled in museum visits, expensive restaurants, viewing the botanical gardens and getting up at the crack of dawn so he could watch a rare bird in its natural habitat, but had allowed only a measly five minutes for sex. Just looking at the timetable made her feel tired. Even if Howard assumed they would consummate their marriage in just a few minutes, Maddie didn’t think she would have the energy or even the desire to do so. That had been the first straw.
She could count on one hand the number of times they’d had sex so far. Howard had explained that he respected her too much to take advantage of her before they were married. Since she could count on her other hand the number of boyfriends she’d had (without including her thumb), at first she’d taken his statement at face value. Until she realized sex with Howard wasn’t exactly earth-shattering.
And that made her question her feelings for him. Could she really marry a man who didn’t excite her in the bedroom? Every day, she’d had doubts leading up to the wedding. And this morning, her jitters had intensified.
Grimacing, she looked down at the full-skirted designer creation she wore. It might be a bit of a meringue, especially combined with her generous figure, but did she really look pregnant? Howard’s great-aunt had asked her that question an hour ago. That had been the second straw.
And then came the final straw …
Maddie stomped along the highway. Why couldn’t she find a man who would fall in love with her? Who desired her, curves and all? Who was incredible in the bedroom and who would totally ruin her for all other men for the rest of her life? Who wanted to marry her for one reason only - because he loved her, and couldn’t live without her?
Stumbling over a rough patch of road in her ivory kitten heels, she told herself to slow down. So far, nobody had come after her. It appeared Howard hadn’t yet noticed that his bride was missing. Maddie paused, taking note of her surroundings for the first time. Wyoming was beautiful. She could see snow-capped mountains in the distance, although it was June, and cows grazed on lush pasture bordering both sides of the highway. The warmth of the sun caressed her face, a gentle breeze trying to ruffle her up-do.
Distracted by her surroundings, it took her a few seconds to realize that a vehicle had pulled up beside her.
“Are you okay?”
Startled, Maddie whipped her head around, fine strands of chestnut hair that defied hairspray falling around her face. A ruggedly handsome man in his mid-thirties gazed at her in concern from the open window of a large, black SUV. His short dark hair emphasized his molten-brown eyes, while his straight nose and firm, sensual lips made Maddie aware of her quickening pulse. It never quickened when she was with Howard.
“Does it look like I’m okay?” She gestured ruefully to her wedding gown.
“Did you break down further back?”
She nodded. “I got a flat. And there isn’t a spare.” Tightening her fingers on a tiny, ivory purse that looked like it was barely big enough to hold a lipstick, she added, “I forgot my cell phone.”
“You can use mine. Here.” He rummaged for a second and held out his phone. His strong, tanned fingers curled around the sides of the cell. “Call the rental car company and tell them you’re sixty miles from Elk View Corner.”
Maddie bit her lip before taking the phone from him, careful not to touch his fingers. “Thanks.” She stood there, indecisively. The last thing she wanted to do was go back to that fiasco of a wedding. But if she made that phone call, isn’t that what would happen?
“What’s wrong?”
She gnawed her lip. “I don’t want to go back.”
“Back where?” He frowned.
Maddie clutched his phone. “To my wedding.”
He scrutinized her, his eyes traveling over her slightly disheveled figure. “Are things that bad?”

When an unconscious, curvy woman appears on Zach Coltson’s ranch, his first instinct is to get her to safety. A storm is brewing and there is no way he can call for help.

Once the woman recovers consciousness, they are both shocked to discover she has amnesia!

Why doesn’t she have any identification on her? What made her seek out his ranch? Zach vows to help her discover the answers, and along the way, loses his heart to her.

But can she return his feelings? Is she free to do so? Will she become His Mysterious Bride?

You may also enjoy:

“Drink this.” The man held a glass of water to her lips. Her hand shook as she curled her fingers around the tumbler, the cool, wet liquid feeling good against her arid lips and throat.
When she couldn’t manage any more sips, she sank back against the arm of the comfortable sofa, shaking her head when he tried to hold the glass once again to her mouth.
He was tall, with short, dark brown hair. Hawk-like brown eyes that looked like they would never miss anything. Craggily handsome face. She guessed him to be in his early thirties. A deep, masculine voice she somehow found oddly comforting. He looked like he worked outdoors; his broad shoulders under his denim shirt appeared to be well muscled.
Her gaze flickered to the dwelling walls. She was in some kind of cabin. But she had no idea how – or why - she was there. Solid, old-fashioned, dependable looking oak furniture – somehow it reminded her of the man standing over her. She glanced down at the crocheted rug covering her. The pink, white, and blue granny squares with black borders looked like they had been made a long time ago with loving care.
A wood burning stove in the corner gave out welcome warmth, the flickering flames dancing inside.
“How—” her voice faltered and she licked her lips. “How did I get here?”
“I found you on the riverbank and brought you here,” he replied, scrutinizing her expression.
She crinkled her brow. The riverbank? Which riverbank? Why was she there?
“Where am I?” She gazed at him as if he could supply all the answers to her predicament.
“You’re at the 8C Ranch in Montana. We’re nearly an hour from Billings. The closest town is Spring River Bend.”
“Ranch? Montana?” She shook her head. The name of the ranch meant nothing to her. Why would she be on a ranch in Montana?
“I’m Zach Coltson,” he added and gestured to the living room. “This is my cabin.”
“I don’t understand.” She shivered.
“Are you cold?” He was instantly at her side. “Let me get you another blanket.”
He disappeared into another room and returned seconds later. “Here.” He wrapped a blue blanket around her shoulders as if she were made of crystal. “That’s better.”
“Thanks.” She smiled at him weakly. “I’m—” she hesitated. “I’m—” She looked at him in consternation. “I can’t remember my name.”
Her stomach flip-flopped with anxiety. What was going on? Why didn’t she know what her name was?
She closed her eyes as a sudden pain in her head overwhelmed her. Putting her hand up to her forehead, as if that would somehow stop the throbbing ache, she closed her eyes. But when she opened them, she saw him – Zach – standing close by, looking at her with concern on his face.
“What’s wrong?” He hunkered down, so his face was at the same level as hers.
“My head,” she whispered. “It really hurts.”
“You might be concussed.” He straightened, then ran his hands over her head. “You have a bump - here.” His fingers stroked the tender spot. “You need to be checked out by a doctor, but we’re in the middle of a storm, so we can’t go anywhere right now.”
His fingers felt cool and capable against her scalp. In another world, she would have given in to the temptation to lean into his touch. But she didn’t know her own name, had no idea where she was, and Zach Coltson was a complete stranger to her.
Or was he?

Jenn Roseton believes that romance and happy endings go together. When she’s not writing, she indulges in delicious gourmet chocolate.
Although she’s spent time in Wyoming, unfortunately, she didn’t meet a sexy cowboy of her own.

at September 05, 2018
Email ThisBlogThis!Share to TwitterShare to FacebookShare to Pinterest