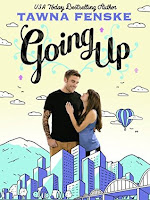 If someone had told Noah Donovan he was going to be stuck in an elevator with a very beautiful, slightly odd bartender and her fluffy packrat, he never would have believed it. Fortunately, the quirky brunette leaves the very cuddly rodent behind. Unfortunately, she’s married.
In Lexi Allison’s job, she’s accustomed to warding off unwanted advances with a fake wedding ring. So when she meets a tatted-up hunk in an elevator, she’s quick to revert to her default tall tale. This guy certainly knows how to push her buttons, but the thing is, they’re the right buttons. Not that it makes any difference. She won’t see him again anyway.
Noah and Lexi are about to discover that fate has plans for both of them—and that their ups and downs are just beginning. Because it’s going to take two lies, three misunderstandings, a case of mistaken identity, and one very persistent rodent to prove that perfect strangers can make the perfect couple.
PAT'S REVIEW

at February 06, 2019
Email ThisBlogThis!Share to TwitterShare to FacebookShare to Pinterest