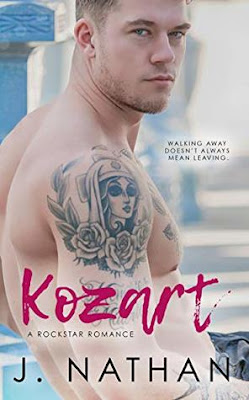 Kozart Savage is the world’s biggest rock star.
At twenty-five, he’s got it all. Money. Fame. And the adoration of fans everywhere.
He thought that was enough to make him forget his past.
Enough to transform his distrusting heart.
Turns out that’s not how it works...
Then he meets a bridesmaid hiding out in a hotel bar.
Probably the only girl on the planet who doesn’t know who he is.
But she seems to be the one girl who can give him something no one else can.

Aubrey Prescott just discovered her boyfriend cheating—at her sister’s wedding.
Trying to escape humiliation, she seeks refuge in a hotel bar.
While trying to figure out how to pick up the pieces of what was supposed to be an amazing senior year in college, a handsome stranger interrupts her wallowing.
A stranger who quickly makes her forget why she’s there.
One who, after an unforgettable night, disappears without a second glance.

But walking away doesn’t always mean letting someone go. 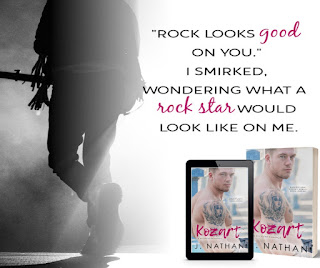 I gave myself one last look and grabbed the handle on the door. I stepped out, gasping as someone grabbed my arm and pulled me out the nearby exit door.
My heart raced as I pulled free, spinning around in the dark alley we’d ended up in.
Kozart stood in front of me, a ball cap pulled down low on his head and a smirk on his face.
My eyes widened. “What are you doing here?”
He dug his hands into the pockets of his torn jeans. “I was in the neighborhood.”
I glanced around the windowless alley with its giant dumpsters and foul odor.
“I was in town,” he clarified. “I just wanted to grab a drink and low and behold, here you are.”
“Said every good stalker.”
He threw his head back and laughed. The sound was just as sexy as it was over the phone, if not more as it echoed in the alley.
“And I’m sure I don’t need to mention the dragging-me-out-of-the-bar-into-a-dark-alley thing,” I added.


He chuckled, his eyes lowering to the pavement.

Finlay Thatcher is a lost soul, guilt-ridden after the death of her twin brother. When Alabama's football coach gives her the opportunity to work for him, she knows it's her chance to move on, even if it means living her brother's dream.

Caden Brooks is Alabama's star quarterback. He's got it all. The attention of adoring fans. A girlfriend who'd do anything to hold on to him. And a future in the pros. He's getting along just fine until Finlay steps into his life, despising him at first sight and pushing his buttons like no other.

Unfortunately for Finlay, and her attempt to keep Caden at arm's length, there's nothing Caden loves more than a challenge. The problem with this challenge is she comes with a secret that has the power to destroy everything. 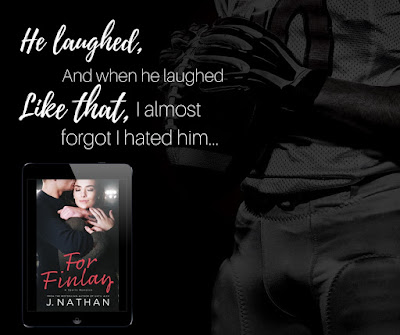 I smiled, reaching my hand out to him. “Mind giving me a hand?”
He reached down and grabbed my hand. His dry grip was strong—quite a contrast to my cold pruned fingers. There wasn’t a doubt in my mind that he could’ve pulled my entire body out with one tug. But that’s not what I wanted. Instead, I tugged his hand hard, throwing him off balance. He tried catching himself but fell into the water with a huge splash.
I scrambled back, not wanting to be anywhere near him when he surfaced.
When he did, his eyes were wild, searching the pool for me. I assumed they’d adjusted to the dark like mine because he spotted me on the low end, a sly smile swiping across his face. “You thought that was funny?” He pushed his hair off his forehead.
I nodded as I stifled my laughter. “As funny as a box of tampons in my lap.”
“So that’s how it’s gonna be? Eye for an eye?” He moved toward me, wiping water from his eyes as he did.
“Just following your lead.” I kept him in my sights as I moved along the wall, lowering my body so only my head remained above water.
“Then why are you all the way over there?” He moved closer, treading water easily as I shuffled away from him. “You wanted me in the water. Here I am.”
My pulse began to rattle in my chest. “I didn’t think you’d actually fall in.”
He scoffed. “You pulled my hand but didn’t think I’d fall in?”
I shook my head. “I wanted to scare you.”
“Do I look scared?” His eyes tightened. They were predatory and sexy as hell. If I was capable of falling under his spell, I very well could have in that moment. But his charms were wasted on me. He lunged forward until he had me backed into the curved corner of the pool.
I moved right. He was there. I tried for left. He was there, too. Shit.
“Now, what to do with you,” he mused.
Heat crept up my neck, spreading to my cheeks. “I’m sorry.”
He raised a brow. “Now you’re sorry?”
I nodded, unsure what he was looking for.
His features remained pensive as he tunneled his fingers through his wet hair, his biceps all shiny and ripped.
Oh, shit.

J. Nathan is the author of new adult and sports romances with cocky heroes and sassy heroines. When she's not writing, she's a total romance junkie! Add an alpha male who's unlikable in the beginning...even better. She loves watermelon margaritas, guys in backward hats, country music, the summertime, and her amazing family and friends.

at September 11, 2019
Email ThisBlogThis!Share to TwitterShare to FacebookShare to Pinterest