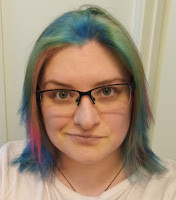 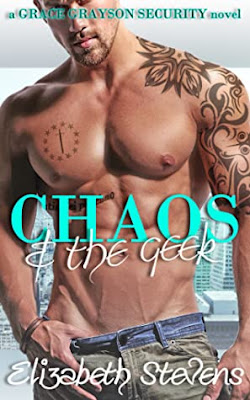 How do you politely refuse when the only guy to star in any of your dirty fantasies have just offered to put you up for the foreseeable future and your brother’s just accepted like you were in fact still thirteen and couldn’t make decisions for yourself? You don’t. And, you end up with a roommate who wears a very good elegant mask over the rough and tumble, bad boy core I remember far too well.

So, there’s not only the issue that he’s my older brother’s best friend, but also a sex-god this virgin can barely talk to. But that certainly never stopped me from drooling over him and it wouldn’t stop me now. He’s so far out of my league, I wouldn’t even clean in his league.

Except, there might just be a smoldering heat in Kit’s eyes that suggests he’s not quite as out of my league as I thought. Just maybe, this geek is about to get a whole lot of chaos.

When I find out about my best mate’s little sister’s situation, the offer is out of my mouth before I can stop it; Hawk’s like a brother to me even if Amber’s never looked twice at me. I could never tell if she was scared of me or hated me. But the deal is done. She’s going to bring her bedraggled self upstairs to my penthouse and live with me for as long as she needs.

I see the pain she hides away, I see the lack of confidence despite how smart she is, how good. If there’s something I’ve learned, it’s that confidence makes all the difference. So, it becomes my mission to help Amber finds her confidence. But I find more than confidence in her and suddenly I’m seeing my best mate’s little sister completely differently.

I’ve never known what to say to her. She’s always been good and studious and sweet. She’s always been so far out of my league I wouldn’t even carry bags in that league. Her face is a mask that tells me nothing in between the sparse words that come out of her mouth.

Except, there might be something in the way she smiles at me that gives me hope I’m not as far out of her league as I thought. It might just be time that this chaos gets a little geek.

Global links to all books - https://books2read.com/rl/elizabethstevens-library

We found each other’s eyes again and I wasn’t sure exactly what I saw in his, but I could see something had changed him. There was pain deep inside now where before there’d only been…emptiness and a different sort of pain. Before they’d left, Kit had been trying to find his place in the world. Now he looked like he’d found it, but the truth was much too real.

She looked amazing and my breath was completely knocked out of me. Don’t get me wrong, there was nothing wrong with the oversized jumpers and the jeans. Amber had a way of pulling those off with that sweet geeky-chic that gave new meaning to the term sexy librarian. But there was something about the look of complete confidence on her face. 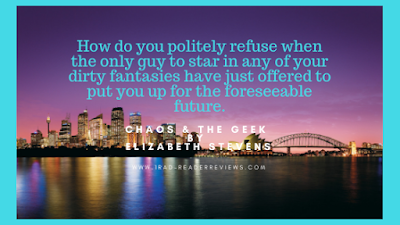 I didn’t belong in their world, but I made a good show of pretending I did. Mother and Father expected it. All I wanted to do was get a cozy cottage in the suburbs and live with my million cats. What I got instead was suitor after suitor paraded in front of me and the threat of a looming engagement. So, what else was a girl to do?

After bumping into Mrs. Fortescue’s ‘companion’ one too many times, I decided he’d do. Mother and Father wanted an engagement? They’d get one. Except I’d be the one having the last laugh because Patrick is the total opposite of what my parents want in a son-in-law – his nickname is Hawk for goodness’ sake – and I have no obligations to him in any department.

But of course, the best-laid plans make fools of us all and it’s not long before I want him to hold me accountable only to him in EVERY department. There’s just the small problem of him being completely unsuitable and without any inclination to settle down.

If there’s one thing that makes a guy reconsider his womanizing ways, it’s seeing his best mate and his little sister settle down. If there’s another, it’s a gorgeous woman in a stunning red dress. But she’s a part of a world I can only pretend to fit into and she’s a damned lady – elegant and sophisticated – and she’s totally off-limits to a grunt like me.

Every time we meet, there’s a look in her eyes that suggests she’s far less sophisticated than she’d have me believe. And it’s not long before this hawk is close to begging to relinquish his freedom, even just for one night. So, how could I say no when she needed my help? I was expertly qualified to serve, and if I got to be myself for once that was just icing.

But the more time I spend with her, the more I want to be around her. The more it feels less like a job and more like something real. There’s just the small problem of her being an heiress with obligations that don’t include me and the job will only last so long.

I don’t know a lot about ladies, despite my remarkable ability to play a part. All I know is there’s always more underneath the mask, and there’s only one lady who can tame this hawk.

Global links to all books -
https://books2read.com/rl/elizabethstevens-library 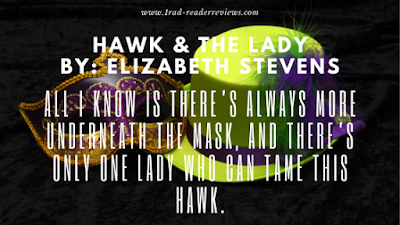 Writer. Reader. Perpetual student. From the Dwarf. Never caffeinated enough.
Born in New Zealand to a Brit and an Australian, I am a writer from South Australia with a passion for all things storytelling. I love reading, writing, TV and movies, gaming, and spending time with family and friends. I am an avid fan of British comedy, superheroes, and SuperWhoLock. I have too many favorite books, but I fell in love with reading after finding Isobelle Carmody's 'Obernewtyn'. I am obsessed with all things mythological - my current focus being old-style Irish faeries.
I have a Master of Arts (Writing), a Graduate Diploma in Research Methods (Creative Writing), a Master of Arts (Editing and Publishing), and am currently working towards my Ph.D. (Editing and Publishing - Indie Book Marketing).
I have twenty-four books published with Sleeping Dragon Books, for readers from Middle Grade to Adult ranging from adventure to romance. And many more are in the works.
I live in Adelaide with my long-suffering husband, delirious dog, mad cat, four chickens who are scared of free-ranging, and a turtle with a penchant for sticking her head in her filter pipe.

at April 22, 2020
Email ThisBlogThis!Share to TwitterShare to FacebookShare to Pinterest