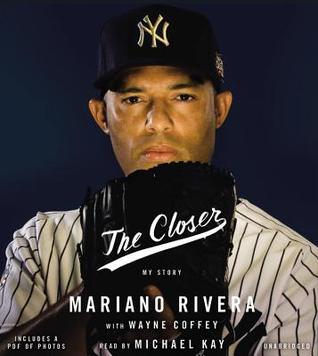 Mariano Rivera, the man who intimidated thousands of batters merely by opening a bullpen door, began his incredible journey as the son of a poor Panamanian fisherman. When first scouted by the Yankees, he didn't even own his own glove. He thought he might make a good mechanic. When discovered, he had never flown in an airplane, had never heard of Babe Ruth, spoke no English, and couldn't imagine Tampa, the city where he was headed to begin a career that would become one of baseball's most iconic. What he did know: that he loved his family and his then girlfriend, Clara, that he could trust in the Lord to guide him, and that he could throw a baseball exactly where he wanted to, every time.
With astonishing candor, Rivera tells the story of the championships, the bosses (including The Boss), the rivalries, and the struggles of being a Latino baseball player in the United States and of maintaining Christian values in professional athletics. The thirteen-time All-Star discusses his drive to win; the secrets behind his legendary composure; the story of how he discovered his cut fastball; the untold, pitch-by-pitch account of the ninth inning of Game 7 in the 2001 World Series; and why the lowest moment of his career became one of his greatest blessings.In The Closer, Rivera takes readers into the Yankee clubhouse, where his teammates are his brothers. But he also takes us on that jog from the bullpen to the mound, where the game -- or the season -- rests squarely on his shoulders. We come to understand the laserlike focus that is his hallmark, and how his faith and his family kept his feet firmly on the pitching rubber. Many of the tools he used so consistently and gracefully came from what was inside him for a very long time -- his deep passion for life; his enduring commitment to Clara, whom he met in kindergarten; and his innate sense for getting out of a jam.When Rivera retired, the whole world watched -- and cheered. In The Closer, we come to an even greater appreciation of a legend built from the ground up.

HUBBY'S REVIEW:
This is more than a baseball book. Marino Rivera who becomes the greatest relief pitcher with 602 saves is probably the most humble athlete that I have read about. Starting from his life in Panama, going out with his father who was a fishermen, he speaks of a man who got up early every day and went to work really for very little money but to them it was a lot because not everyone had a fishing boat. When he was not helping his father or his mother he would play baseball but not with the type of equipment we have they would make things for a bat and a ball. He does not speak of himself as a perfect son he talks of the mistakes he made and for dropping out of high school. But one day he goes with some friends to play an actual game in a stadium where they had to take a bus to get there and when he is always playing the outfield he is asked to pitch. A local scout who was there saw him and asked him to come back the next day. He did, he was asked to pitch again. This went on for a few days when he was finally offered a contract with the New York Yankees. He left his village and not only went on a plane for the first time but when he showed up at camp he did not speak the language or even have a baseball glove. He takes you through the people he meets and the struggles he has and also the team mates that helped him even though they would not make it to the big leagues. If you are a Yankee fan you will notice some names like I did that were drafted but because of an injury afterwards they were never the same. He speaks a great deal about when he decided to marry Clara his girlfriend from his town and how she has helped him stay grounded and focus. They are still married and have three children. He first starts off as a starting pitcher before they put him in as a setup man for their first championship under Torre, with John Wetland as the closer but you know the next year he will be the man. He speaks of how the split finger fast ball pitch just started to happen when he first was throwing in warm up then it turned into his main pitch. He goes into the team mates he had and playing with Jeter, Posada and Pettit in the minor leagues then in the majors. What it was like for Posada and his family going through their son being born with craniosynostosis and still playing at a high level. That is just one story there are many more. He speaks a lot of his faith and how it has helped him not only in baseball but in life in general and also how he and his wife have done for their village not forgetting where they came from, they still have a home there. Overall a good book and I don’t think you need to be a Yankee fan to enjoy this book or his story.  I give this 4 Stars.
at February 28, 2015
Email ThisBlogThis!Share to TwitterShare to FacebookShare to Pinterest