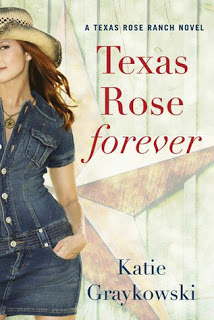 Will Be Here Friday 7pm PST.

Everything’s bigger in Texas, and that goes double at the Texas Rose Ranch, home to the Rose family through five generations of toil, sweat, and scandal. From the moment CanDee McCain is hired to write a history of the Roses’ empire, she’s bowled over by tall, sexy Cinco Rose. True, the man initially mistakes her for a stripper, but he certainly puts the man in manly. For the first time since her cheating ex left, stealing her novel-in-progress in the process, CanDee is ready to have a little fun.

No woman has ever made Cinco feel both so at ease and so turned on. Since his divorce, he’s preferred a saddle and solitude to risking his heart again. Yet something draws him to the fast-talking, leggy redhead. CanDee’s not just sweet; she’s smart and brave too. But her research is uncovering long-buried secrets that could jeopardize everything the Roses prize most—and destroy a love that’s just begun to bloom.

This book was stuck too my hands once I picked it up. It was by far one of the best comedy romances I have read in a long time. I laughed so hard I was crying and trying to catch my breath at the same time. Telling my hubby then just having to read it to him had us both laughing and crying out loud. This is a book you don’t want to miss.There are some touching moments as well and some very serious moments that this author tackles with grace. Yet, she does not shy away from the uncomfortable subject at all. This family drama is a homerun for sure. Feeding my love of romance and family dramas for sure.CanDee McCain an author by night a genealogist by day for families who hire her to come and trace their family’s lineage. CanDee was not your average woman she was 6 feet tall in stocking feet. When she wore the sexy as hell shoes she loved to wear she was 6 feet 5 inches tall easy. She had long flaming red hair and golden brown eyes. Her legs went on forever but best of all now that her ex was out of her life her great sense of humor was back.CanDee has been asked by Lucy Rose to research and write their family history. She would live at Texas Rose Ranch for the next 6 weeks. She really needed the money too. Her ex had left her with more bills than when she met him and he had stolen her last first draft for her mystery novel. Then he published it under his own name. Phillip, her ex, was below a bottom feeder.As she waited for Dr. Lucy Rose at the family museum on property. She is met with by who she believed is a ranch hand. Things are going well for a while with the chit chat. Then it takes a terribly wrong turn when the man whom she is talking thinks she is a stripper. She later finds out it is Cinco Rose (Lucy’s oldest son.) Why does he think this well every year on his birthday his brothers get him a stripper out of the ordinary to surprise them and well he thought this year they were going for the librarian look? Before things could get to far out of hand Lucy walks in. CanDee takes it all in good fun teasing Cinco.Making him all the more interested in her. Which surprises even his mother.See how a relationship forms from this crazy encounter between Cinco and CanDee. I loved this couple and Lefty. I give this 5++++ stars. Provided by netgalley.com. Follow us at:www.1rad-readerreviews.com.

Mustang Ridges isn’t a town, a stripper, or some old western movie. She’s a feisty, single mom living in the small town of Lakeside, Texas where money does buy happiness and keeping up appearances is much more important than the truth. Six months ago on her thirtieth birthday, her husband decided that married life, fatherhood, and his job as the Lakeside Chief of Police weren’t as exciting as a permanent vacation to Grand Cayman with his mistress and a million dollars in diamonds he stole from the police evidence lockup.
Mustang is a pariah in a Lakeside full of piranha. But she refuses to leave—this is her home, and she figures that if she can’t join them, then she’ll beat them at their own game. With a little luck, some intimidation, and the help of her good friends Monica and Haley, Mustang presides over her own little slice of Lakeside, the Bee Creek Elementary Parent Teacher Organization.
All is quiet in Lakeside until Molly Miars, the kindergarten teacher, is found dead. According to the new police chief, she overdosed on heroin. That doesn’t explain why her head was the only body part to make it to her funeral. Mustang and her follow PTOers don’t buy the heroin overdose for a second.
Vowing to do right by Molly, the PTO decides to investigate.
Quickly they find that Lakeside isn’t the quiet, sleepy town it appears to be. There is a dark side—money laundering and drug trafficking. When Mustang’s name turns up on a contract killer’s hit list, things go from bad to worse. Can she and the PTO stay alive long enough to find out who killed Molly Miars?

at March 31, 2016
Email ThisBlogThis!Share to TwitterShare to FacebookShare to Pinterest