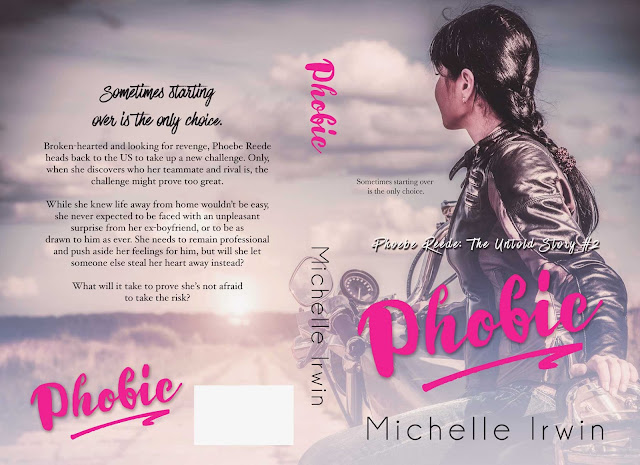 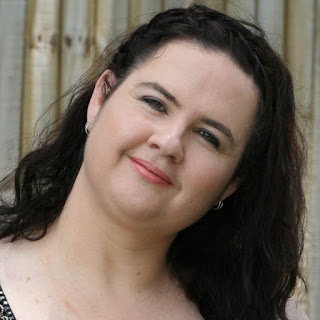 Author Of:
(Out soon) 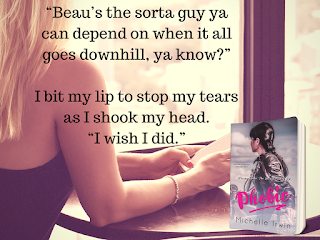 Sometimes starting over is the only choice.

Broken-hearted and looking for revenge, Phoebe Reede heads back to the US to take up a new challenge. Only, when she discovers who her teammate and rival is, the challenge might prove too great.

While she knew life away from home wouldn’t be easy, she never expected to be faced with an unpleasant surprise from her ex-boyfriend, or to be as drawn to him as ever. She needs to remain professional and push aside her feelings for him, but will she let someone else steal her heart away instead?

What will it take to prove she’s not afraid to take the risk?

**Due to strong language and sexual content not intended for anyone under the age of 18. Later books in this series contain content, including sexual assault and violence, that may trigger emotional distress in some readers.** 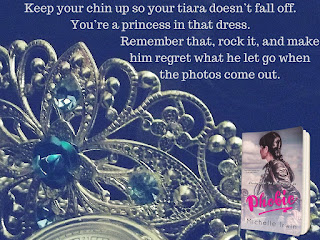 “I’m afraid my granddaughter has forgotten her manners,” Nana said, sticking out her hand. “You must be Beau.”
I clenched my jaw. Her casual mention of his name, as if his identity was the most obvious thing in the world, had to have made it clear I’d been talking about him. That was the last thing I wanted him to know. Still, it was too late to change it. “Sorry, Beau, this is my nana, uh, Kelly Reede.”
“Nice to meet you, Mrs Reede. I can see where Phoebe got her enchanting eyes.”
“It’s Ms actually. It has been ever since I left my husband for his constant cheating.”
I wanted the ground to tear apart and swallow me whole. For half a second, I debated trying to fake a sudden and unexpected emergency just to get out of the room. She’d stuck with Granddad for a long time after the first time he’d cheated, but with Dad’s help had eventually found the strength to leave. After that, her confidence had only blossomed and she’d grown more and more like Dad all the time. Now, she often said the thoughts that crossed her mind without thinking through all of the consequences.
Beau’s eyes narrowed. “Well, I guess it’s not just the eyes that run in the family,” he muttered under his breath. He shook off the mood an instant later. “It was lovely to meet you, Ms Reede. It’s always nice getting any insight into our Phoebe. She’s a bit of an enigma.”
It was Nana’s turn to frown as her gaze spun to me. “That’s odd, because we’ve always found her to be a straight shooter, just like her Dad.”
“Maybe it’s just us guys she likes to play ’round with.”
My hands found my hips. “Maybe she’s in the fucking room and you should both stop talking about her like she’s not.”
“Phoebe!” Nana exclaimed.
Beau’s gaze was fixed on me, his lips curled up into a snarl. He dropped the expression a second later when he turned back to Nana. “Don’t worry about it, Ms Reede. I’m used to her gutter mouth. She’s turned it on me often enough. Haven’t ya, darlin’?”
I wanted to turn it on him again. My fingers clenched and unclenched at my side. “If there’s nothing else you wanted, I think we’ll be going now.”
“Actually, I was hopin’ to have a word or two with ya alone.” Beau’s gaze turned from me back to my nana. “If ya don’t mind. It won’t take a minute.”
I could feel Nana’s gaze passing between Beau and me. “Not at all,” she said after a moment. “I’ll go sign myself out and wait in the car.”
It would have been so much easier if she’d said no. If she’d demanded my undivided attention while she was in the country. Instead, a minute later I was face-to-face with Beau.
Alone. 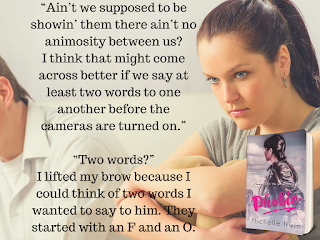 at November 16, 2016
Email ThisBlogThis!Share to TwitterShare to FacebookShare to Pinterest