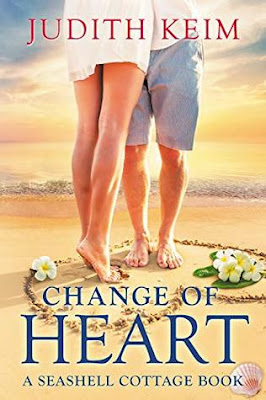 Emerson “Em” Jordan always wanted a Valentine’s Day wedding. But after being dumped by her boyfriend, she spends the holiday at Seashell Cottage on the Gulf Coast of Florida with Devin Gerard, a family friend who has no interest in her or any other woman and is instead concentrating on his pediatric medical practice and continuing medical missions in Costa Rica.

Em, who’s always wanted a large family, doesn’t mind his disinterest. At thirty-two, she’s decided she doesn’t need a husband to have a child or to adopt one. First, she’s going to fulfill her dream of setting up her own landscape design business in upstate New York and has promised to continue to help run her grandmother’s flower shop.


It isn’t until Em and Devin become friends that Em realizes she might want more than friendship from him. But with his work in Miami and Costa Rica and her busy life in New York, it’s out of the question until something happens that changes everything, even a couple of hearts.

Later, after she felt as if there were no tears left inside, Em lifted her phone and called her sister.
After Em had done her best to get the details out without a few more rounds of tears, Elena said, “I’m so sorry. That stinks. I can’t believe Kat would ever do something like that to you. You were best friends, weren’t you?”
“Not really. We were city friends who shared an apartment with others,” Em answered truthfully. “And office friends.”
“Still, that hurts,” Elena said. “What are you going to do about the cottage? How can you afford to pay for it yourself?”
“I can’t, but I couldn’t let Kat know that. Besides, like I told her, the idea of this vacation has kept me going through the lonely holidays, and I can’t, I won’t stay in town for Valentine’s Day. What am I going to do? Do you know of anyone who would have the time and money to share the cottage with me?”
“Not offhand, but let me think about it. Soldier on. Things are bound to get better.”
“I know, because they can’t get worse,” Em sniffed, stemming another flow of tears. 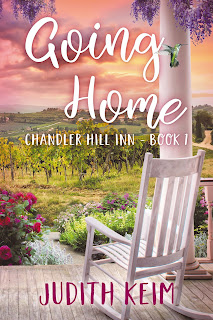 In 1970, Violet Hawkins’ only wish at eighteen is to escape her life in the Dayton, Ohio, foster-care system and make her way to the west coast to enjoy a mellow life and find the love she’s been missing all her life. She makes it to San Francisco, but soon learns she needs a job if she’s to live properly. A kind, young man named Kenton Chandler offers her a sandwich and a job at his father’s inn and vineyards. With nothing to lose, Lettie takes him up on his offer and begins a whole new life in the Willamette Valley, Oregon. She immediately falls in love with the land and is fascinated with the idea of growing grapes in order to make wines. She, Kenton, and Rafe Lopez become friends as she learns about running the small inn on the property.


At the same time, she marries Kenton, a stroke kills his father. And then before she can tell Kenton she’s pregnant, he dies in an automobile accident. Heartbroken and burdened with the gift of the Chandler Hill Inn and Winery, she’s left with the task of making them a success. Struggling to raise a child alone while working to grow the business, Lettie makes a shocking discovery that changes everything.

Some people’s lives unfold in the most unusual ways.
In 1970, the only things Violet Hawkins wanted for her eighteenth birthday were to escape the Dayton, Ohio, foster-care system in which she’d been raised and to make her way to San Francisco. There, she hoped to enjoy a mellow lifestyle and find the love that had always been absent in her life.
Though she made it to San Francisco easily enough, she soon discovered she couldn’t afford a clean, safe place in which to settle down. At first, it hadn’t seemed to matter. Caught up in the excitement and freedom of living in a large city where free love and openness to so many things reigned, she almost forgot about eating and sleeping. One couch, one futon was as good as any other as long as grass or other drugs were available, and others didn’t mind giving her a place to sleep. But after spending four months there, the dollars she’d carefully saved, which had seemed so many in Dayton, were nothing but a mere pittance in a city where decent living was too expensive for her. She took to wandering the streets with her backpack until she came upon a friendly group willing to give her a sleeping space inside or a bite to eat.
One June day, feeling discouraged, she’d just sunk down onto the steps outside a row house when a young man emerged.
He smiled down at her. “Tired?”
She was more than tired. She was exhausted and hungry. “Looking for work. I need to eat.”
He gave her a long, steady, blue-eyed look. “What’s your name?”
“Violet Hawkins. But call me Lettie.”
His eyebrows shot up. “With all that red hair, no flowery name for you?”
She shook her head. She’d always hated both her hair and her name. The red in her hair was a faded color, almost pink, and the name Violet indicated a delicate flower. She’d never had the luxury of being the least bit frail.
He sat down beside her and studied her. “You don’t look like the hippie type. What are you doing in a place like this?”
“On my eighteenth birthday, I left Dayton, Ohio, to come here. It sounded like a great plan—all this freedom.”
“How long have you been here?”
“Four months. I thought it would be different. I don’t know … easier, maybe.”
He got to his feet. “How about I fix you a sandwich, and then I’ll tell you about a job if you want it. It’s at a vineyard in Oregon. I’m heading there later today.”
Her glance slid over his well-built body, rugged facial features, and clean, shoulder-length, light-brown hair. He didn’t fit into the usual crowd she’d been with, which made her cautious. “Who are you? And why would you do this for me?”
“Kenton Chandler.” His lips curved into the same warm smile he’d given her earlier. “I’m heading to Oregon, and, frankly, I could use the company. Keeps me from falling asleep.”
“Yeah? And what is this vineyard?”
He shrugged. “A couple of years ago, my dad bought a small inn with 75 acres in the Willamette Valley south of Portland. He’s planted most of the land with grapes. He doesn’t know that much about making wine and wants me to learn. That’s why I’m in San Francisco. I’ve been working at a vineyard in Napa Valley just north of here, learning the ropes.” He grinned. “Or maybe I should say, learning the vines.”
“What kind of sandwich?” she asked, warming toward him and his wacky humor. Her stomach rumbled loud enough for them both to hear it.

at July 18, 2019
Email ThisBlogThis!Share to TwitterShare to FacebookShare to Pinterest