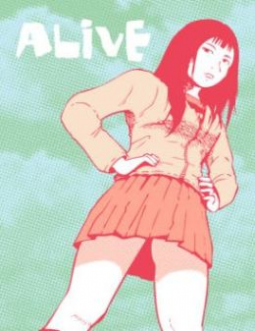 GEN Manga is Indie Manga from the Tokyo Underground.
GEN Manga was made to give fans an exclusive look at real doujinshi, otherwise known as indie manga, that they had heard about, but until now, unable to get their hands on.
In its essence, doujinshi is manga traded among other manga artists. Manga for manga lovers!
Seemingly mundane events twist with an unusual presence of the unreal as the psyche of ordinary people is explored.
Depression, time, and thought are redefined.
Alive is a collection of melancholy love stories saturated with sadness.
Characters struggle to connect with one another but never quite succeed. They are essentially alone.
Enter a world that is dark and disturbing — suicide is constantly contemplated and feelings of guilt, inadequacy, and suppressed sexuality surface as identity itself becomes a terribly fragile thing.

DAUGHTER'S REVIEW:  AGE 13
at November 21, 2014
Email ThisBlogThis!Share to TwitterShare to FacebookShare to Pinterest