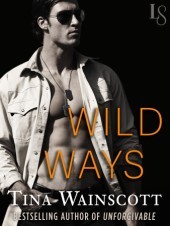 The Justiss Alliance returns in Tina Wainscott’s novel of outlaws and daredevils, as the search for a missing woman forces two brave souls to tap into their wild side.

When her sister, Diana, rides off into the sunset with a member of the Kings of Chaos motorcycle gang, Mollie Reagan is beyond worried. Two weeks later, a desperate call from Di is abruptly cut off, launching Mollie on a dangerous search.

Before Julian Cuevas receives his first assignment for the Justiss Alliance, he finds one of his own: a beautiful, courageous woman looking for her sister in the dark world of violent criminals. Soon Mollie’s mission is Julian’s mission—one he’d give his life for.

Mollie is used to going it alone. Trusting one stranger is hard enough, but Julian brings a whole team from the private “security” firm he works for. The sexy SEAL is living proof that some people can be counted on, even if her savior is a well-armed world-class sniper riding in on his Harley. From head to toe, Julian is a lethal weapon—and now he’s taking aim at fulfilling Mollie’s every desire.

HUBBY'S REVIEW:
This is the second book of the Justiss Alliance series. In this story Julian Cuevas, is given his first assignment that has to do with a biker ganger called Kings of Chaos. Upon his surveillance he comes across a women by the name of Mollie Reagan, who is trying to rescue her sister from this biker gang by herself. She does not want any help for she thinks it is a sign of weakness, even when he proves to her that she is in over her head. This goes on for a while until she realizes that she really is in over her head and that she does need help. At the same time the attraction between the two of them scares her more than him. This is a book full of action and fast paced and the characters are all strong. A very good book and good writing. I got this book from net galley.
at November 26, 2014
Email ThisBlogThis!Share to TwitterShare to FacebookShare to Pinterest