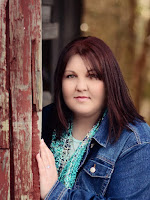 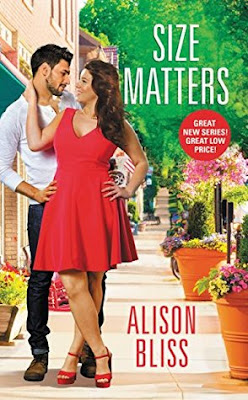 The rules of (fake) engagement...

Leah Martin has spent her life trying to avoid temptation. But she's sick of low-fat snacks, counting calories, and her hyper-critical mom. Fortunately, her popular new bakery keeps her good and distracted. But there aren't enough éclairs in the world to distract Leah from the hotness that is Sam Cooper - or the fact that he just told her mother that they're engaged...which is a big, fat lie. Sam sometimes speaks before he thinks. So what started out as defending Leah's date-ability to her judgmental mother soon turned into having a fiancée! Now the plan is to keep up the fake engagement, stay "just friends," and make Leah's family loathe him enough to call the whole thing off. But Sam has an insatiable sweet tooth, not only for Leah's decadent desserts but her decadent curves. Her full lips. Her bright green eyes. Yep, things aren't going quite according to plan. Now Sam has to convince Leah that he's for real...before their little lie turns into one big, sweet disaster.

Alison Bliss grew up in Small Town, Texas, but currently resides in the Midwest with her husband and two sons. With so much testosterone in her home, it's no wonder she writes "girl books." She believes the best way to know if someone is your soul mate is by canoeing with them because if you both make it back alive, it's obviously meant to be. Alison pens the type of books she loves to read most: fun, steamy love stories with heart, heat, laughter, and usually a cowboy or two. As she calls it, "Romance...with a sense of humor." 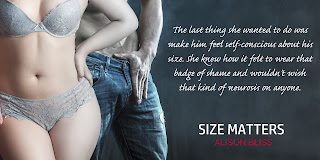 Goodreads giveaway going on for 10 mass-market copies of Size Matters right now. It's only available for the next 11 days though.
Here's the link: https://www.goodreads.com/giveaway/show/214165-size-matters

Once the last customer exited the bakery, Leah turned to Valerie. “I’m sorry I was late this morning. I don’t know what I’d do without you.”
“Actually, all that prep work you did yesterday saved me a lot of trouble. It made the morning run so much smoother.” Valerie sat down on a stool, wiping her brow. “And boy, I was swamped.”
“Hinting for a raise?” Leah asked with a laugh.
Valerie smirked. “Right now, I’d settle for some intel about last night.”
Leah blew out a breath, shrugged, and turned to wipe the counter. “Nothing to tell.”
“Bullshit.”
“No, really. Nothing happened.”
“Shovel, anyone?” Val yelled out to the empty bakery. “Come on, Leah. You can’t seriously expect me to believe that you went home with Sam and nothing happened.”
“It’s true,” she said, continuing to wipe a clean counter to avoid facing her friend.
“Oh.” Valerie paused. “Well, it’s probably for the best anyway.”
She looked over her shoulder at Valerie. “Why do you say that?”
“Max said he has a small penis.”
Leah laughed. “Max has a small penis?”
“No. Sam does.”
She stopped laughing. “That’s not funny, Val.”
“Who’s laughing?”
“Why is Max talking about Sam’s penis with you? And how would he even know?”
“I don’t know. That’s just what he told me when I asked him why Sam was dancing with that other girl and you were sitting alone. Max said for me to tell you not to worry about it and that you weren’t missing out on anything.”
“So you saw all that?”
“Yes. A jerk move on Sam’s part, I might add. Max and I were going to come sit with you, but I got stuck in a long line for the bathroom. By the time I came out, you and Sam had both disappeared. I was a little concerned, but I ran into a girl who comes in the bakery almost every morning. She said she saw you leaving with a guy who fit Sam’s description.”
“We were thrown out by the bouncer. Sam punched Shrimper Bob.”
Valerie blinked, then threw her head back and laughed. “Oh no! Why’d he do that?”
“It was one of those macho things, I guess. You know, checking to see who had the bigger dick.” Shit. Wrong choice of words.
That made Valerie laugh even more. “I take it Sam and his micropenis must’ve lost.”
Leah rolled her eyes then summed up the rest of the story as quickly as she could, but Valerie continued the hysterics. Finally, Leah had enough and sighed. “Stop laughing. It’s not funny.”
“Oh, come on. It’s a little funny.”
“Not really,” she said, pushing open the swinging door and heading into the back room with a scowl on her face.
Valerie stopped laughing and trailed behind her. “Whoa! You really like him, don’t you?”
Why do I have to be so damn transparent? “Doesn’t matter. He doesn’t return the sentiment.”
“Then Tiny Tim is a jackass and doesn’t deserve you.”
at December 08, 2016
Email ThisBlogThis!Share to TwitterShare to FacebookShare to Pinterest